Two events that dominated the Japanese economy since 2020

The event that dominated the profitability of the Japanese firms in FY2020 was undoubtedly, the impact of the COVID-19 and that of the policy responses to the pandemic. It was a big blow to the services sector which depended a lot on the behavior of household consumption. As Figure 1 shows, household consumption, especially that of service, dropped significantly in FY2020. 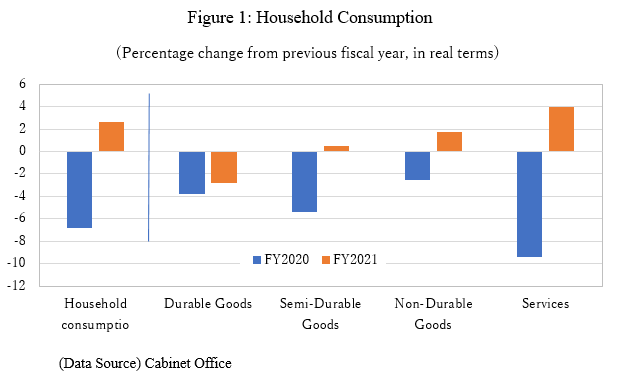 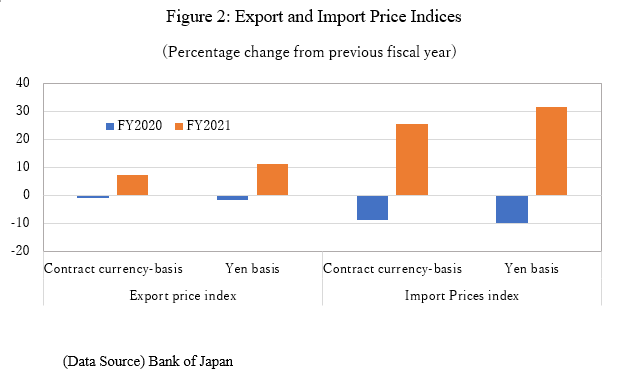 Dispersion in the value-added production by industries

Figure 3-1 shows the rate of change of the value added produced by agriculture, forestry, and fishing; mining; and the manufacturing industries. Similarly, Figure 3-2 shows those for the rest of the industries mainly in the services. 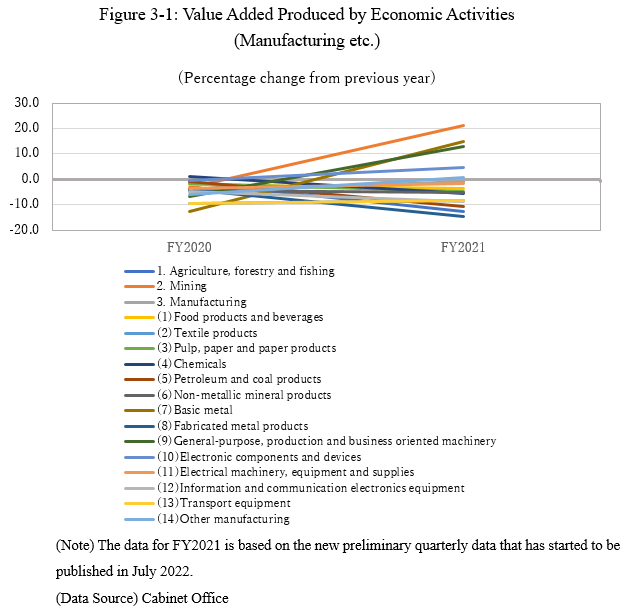 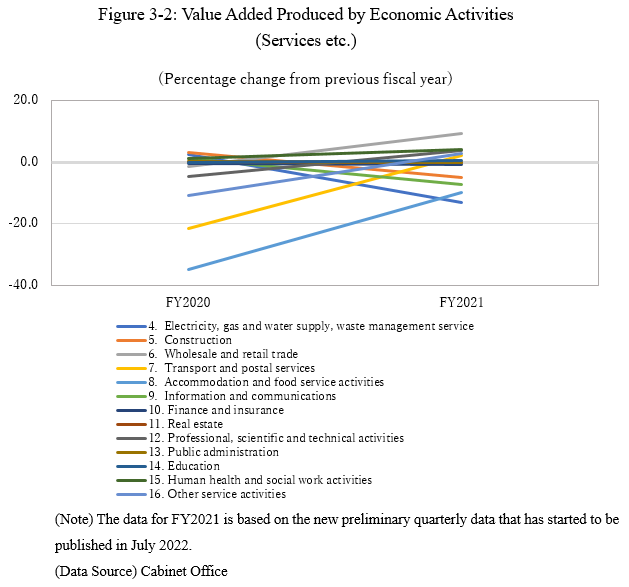 General decline in the production of value added in services in FY2020, with a large dispersion in the magnitude of the decline among industries reflects the impact of COVID-19. Since people’s mobility came to a halt, household consumption showed a significant decline, especially in the services sector as we have seen. Since services related to dining and travelling was particularly affected, it was the “accommodation and food service activities” and the “transport and postal services” that fell the most. However, as the restraint on people’s activity was gradually relaxed, the drop continued in FY2021 but at more modest pace.

In exchange, large dispersion emerged in the manufacturing sector in FY2021. This time the dispersion was between those that were able to see an increase in production versus those that had to see a decline. This reflects the worsening of the terms of trade in FY2021.

Impact of new exports on value-added production by industries

To confirm this point, Figure 4 shows the correlation between net exports (exports minus imports) and the rate of change of the value added produced by industries. 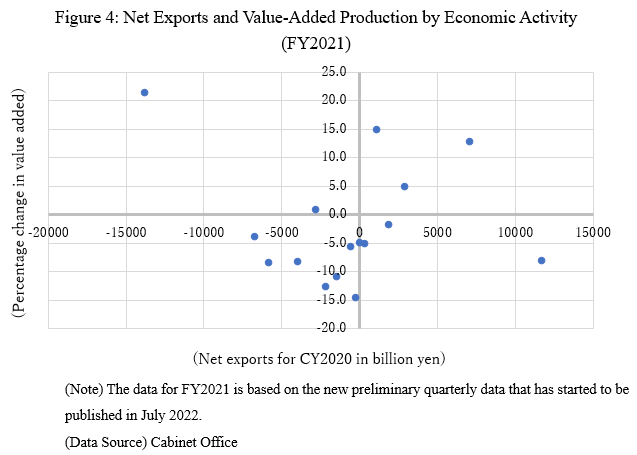 The correlation is not so clear because of some special factors. The data point in the second quadrant corresponds to mining. The industry is increasing its profit in spite of the net imports of raw materials. Most probably, it is because the industry, which produces mineral resource abroad, can enjoy the benefit of the high primary goods prices in the recent period.

The data point in the fourth quadrant is the transport equipment industry. It should be increasing its profit because of the industry’s large next exports. However, they seem to have suffered from the shortage of intermediate goods that they should be receiving from abroad: they had to reduce the production because of the shutdown of overseas factories in cities that were subject to lockdown.

If the two industries mentioned above is are excluded, you will be able to see a positive correlation between net exports and increase in value added produced. It shows that exporters were able to benefit from the recent depreciation of the yen but importers suffered from the worsening of the terms of trade.

A new “letter-K shaped recovery” on the way

The view that a “letter-K shaped recovery” was taking place was popular in the early phases of the recovery from the COVID-19 pandemic. It tried to describe the contrast between the slow recovery in the services sector and relatively fast recovery in others.

In that sense, it can be said that, in the recent period, a “new letter-K shaped recovery” is taking place. It reflects the difference in the impact of increase in primary goods prices and depreciation of the yen on production by industries: exporting sector is doing better, while the importing sectors is not.

The data we examined above was for FY2021 due to the availability of national accounts data. It therefore only includes a short period of the impact of the invasion of Ukraine by Russia that erupted in end of February, and also of the steep depreciation that is taking place since early March. When the data for FY2022 becomes available, we should be able to confirm whether the above observation is a valid one or not.