An Implication of an Unsynchronized Global Recovery under COVID-19

Improved prospects of the global economy

The recovery is led by the firm recovery forecasted for the United States which is expected to grow by 6.4 in 2021 and by 3.5 percent in 2022. In fact, the strong growth in the first quarter of 2021 by 6.3 percent and the higher than expected CPI inflation rate in April 2021 of 4.2 percent year-on year have fueled the expectations that the monetary easing by the FED may be withdrawn earlier than previously expected: as a result, long-term interest rate has risen, and stock prices fallen.

Increase in primary commodity prices and appreciation of the US dollar

An expectation of a global recovery has also led to an increase in primary commodity prices. The prices have generally risen above pre-COVID-19 levels, but is particularly significant in the case for base metals, as shown in Figure 1. 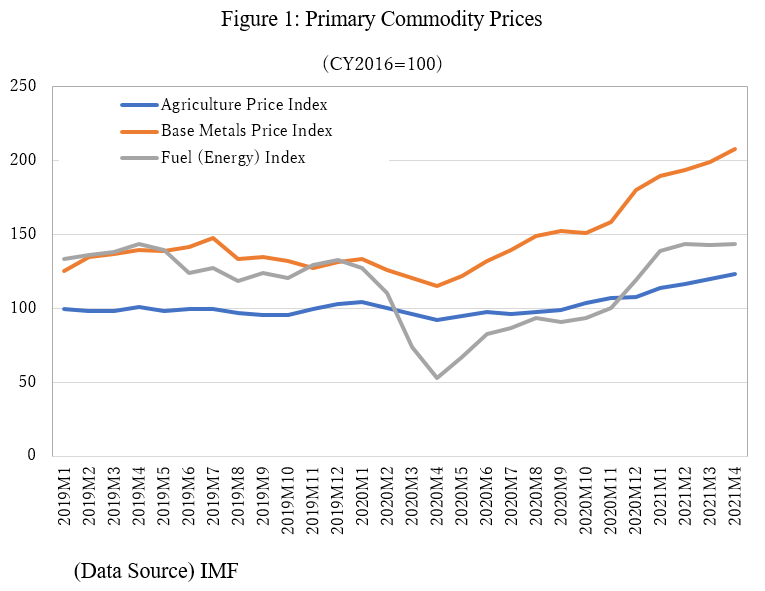 In addition, US dollar has started to strengthen against Japanese yen since early 2021. As Figure 2 shows, it has appreciated from an average of 103.7 yen per US dollar in January to an average of 109.1 in April. 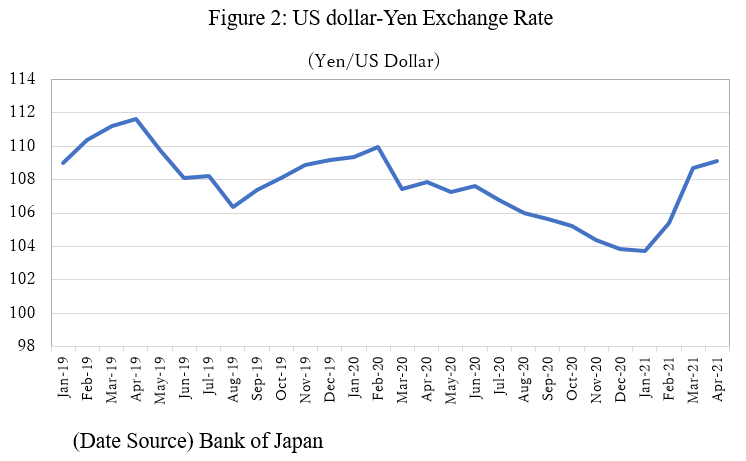 These developments have increased the payment for imports to Japan. Figure 3 shows that import prices index compiled by the Bank of Japan has increased steeply in early 2021: since the increase in export prices index has shown more modest rise, terms of trade has deteriorated over the same period. 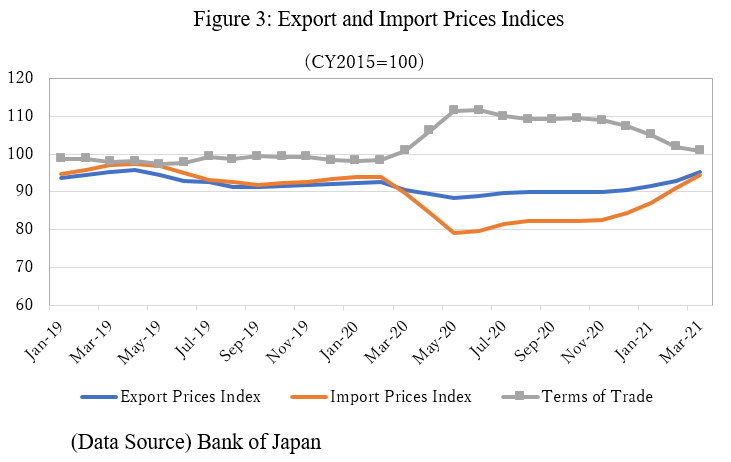 The development should certainly provide negative pressure on the economic activities of the exporting sector. However, the negative impact may not be limited to that sector. That is because the domestic economic activity is still limited and is deteriorating further due to the declaration of state of emergency for the second time in between January and March in 2021 and for the third time in April, which is still in place. In Japan, after recording positive GDP growth rates in the third and the fourth quarters in 2020, a negative growth have taken place in the first quarter of 2021. As a result, the negative output gap in the economy that existed in late 2020 should have widened as Figure 4 shows. 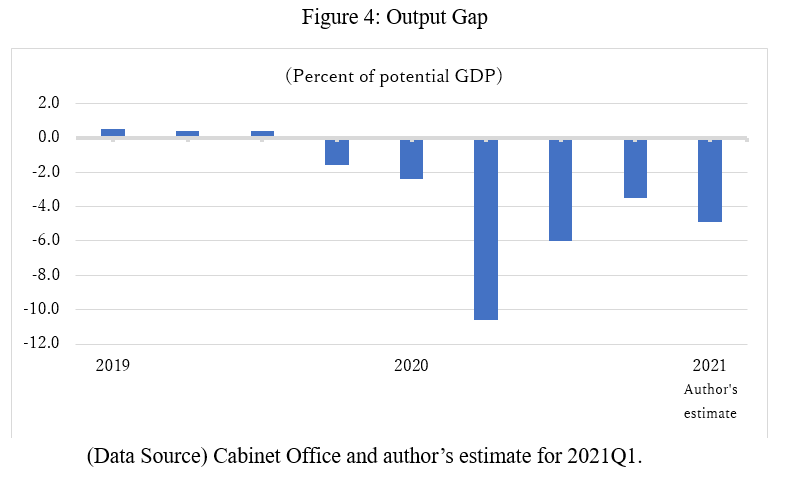 The large negative output gap suggests that the consumer price index (CPI) will be subject to downward pressure. Since the CPI inflation rate had already fallen to negative territory in late 2020, as Figure 5 shows, it may lead to a resurgence of deflation in the near future. 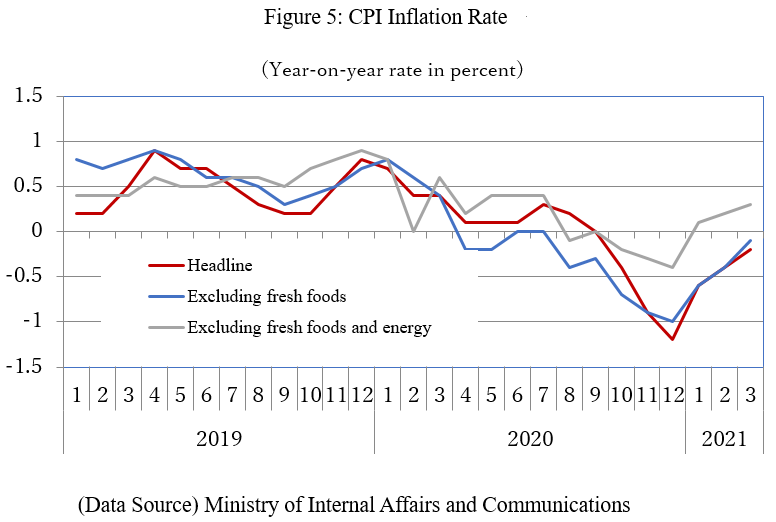 Squeeze in profits and its negative impact on recovery

The resurgence of deflation not only means that the inflation rate target of the Quantitative and Qualitative Monetary Easing is going to be even more difficult to achieve but also passing-through the higher cost of imported fuel, materials, and foods to retail prices is going to be difficult. It will squeeze the profits of the industries whose market is domestic and who are already facing harsh business environment brough about by the COVID-19 and the policy responses to the pandemic. 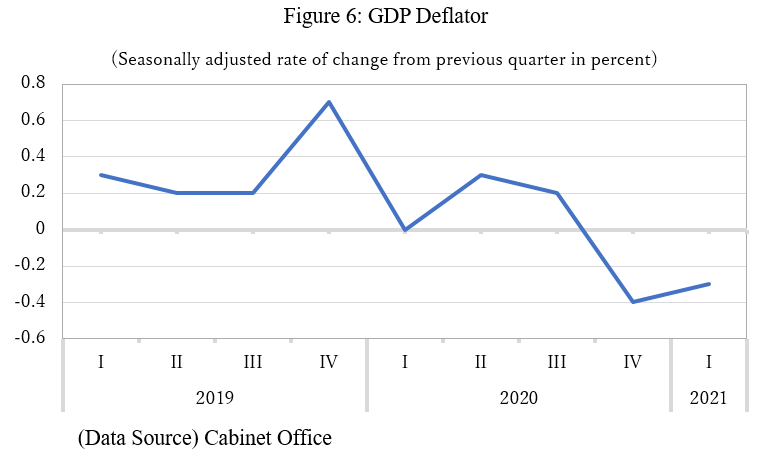 As we have seen, global economic recovery is providing downward pressure on the economic activities of the Japanese economy which is lagging behind the rest in the cyclical phase. There is a possibility that the unsynchronized global recovery is going to sustain with the Japanese economy remaining to be the laggard. The urgent task is to establish a stable environment for the business by making significant progress, under the third declaration of a state of emergency, in suppressing the infection of COVID-19 while accelerating the vaccination of the population.