Consumption tax rate is expected to be increased from 8 percent to 10 percent this October. This is going to be the third tax-rate hike since the introduction of consumption tax 30 years ago in April 1989.

Since the introduction and the tax-rate hikes in the past always accompanied a big surge in demand in advance of the hike and a big drop afterwards, many expect that a similar big swing in demand will come in the latter half of this year.

While it may be something that can be expected from an intertemporal-substitution point of view, similar big swings have not been observed in other countries that have raised their VAT rates. It is interesting to see why there is such a difference across countries. This is the topic of this month’s column.

Big swing of demand observed in 2014 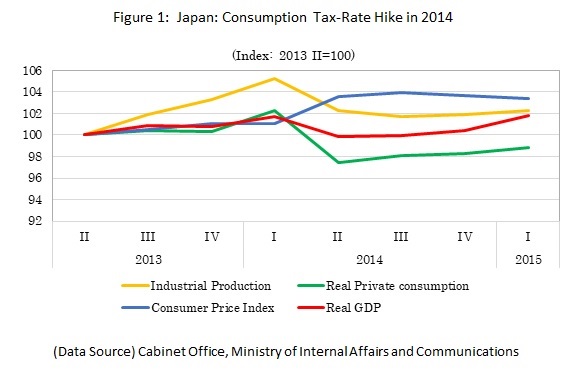 It is interesting to find that nothing like this can be found in the case of VAT rate increase in United Kingdom (UK) that took place in January 2010. The tax-rate rose from 15.0 percent to 17.5 percent, somewhat similar in terms of the magnitude to the Japanese case we just saw. However, in the case of UK, there was only a limited surge or drop in real private consumption, and real GDP continued to grow (Figure 2). 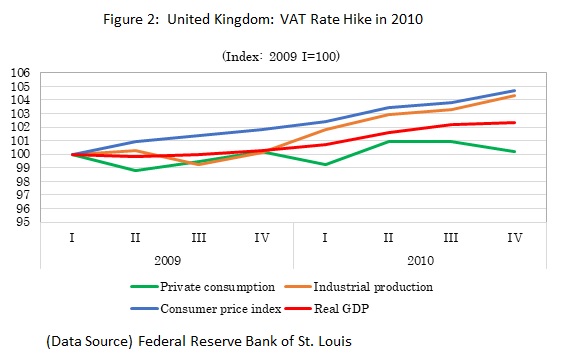 The reasons for the difference seem to be in the following.

First, CPI in UK did not show a steep rise when the VAT rate rose. That is probably because the timing of the pass-through of tax rate hike to the consumer prices is left completely to the retailers of goods and services that are subject to the tax-rate hike.

That is in stark contrast with the Japanese situation where the retailers are encouraged to reflect the increase in tax burden on to the prices immediately. The Fair-Trade Commission even allows cartels to be formed if their purpose is to facilitate the rise in prices in accordance with the tax-rate hike. The aim of such policies was originally to ease the opposition against the consumption tax rate by the retailers who feared that they themselves may have to bear the tax burden instead of the consumers. The result is that the almost all of the prices are now raised at the same time with the tax-rate hike.

Second, consumption expenditures by the households were not affected by the tax-rate hike. It is partly because the prices were not raised immediately when higher tax-rate becomes effective, as we have just seen. However, it is also because not enough time is allowed for the households to bring their demand forward. The latter may need some explanation.

For example, the government’s announcement of the tax rate hike that should take place from the beginning of January 2010 was only made in early December, less than a month before the actual tax-rate hike. Such a sudden change in tax-rate is possible in UK because the Value Added Tax Act allows the Treasury to increase or decrease the rate f it does not exceed an upper limit set in the Act (section 2(2)). Change in the tax-rate does not require amendment of the Act like in Japan, so that the rate change can take place almost immediately.

Such an arrangement brings flexibility to the tax rate changes, and also minimizes the negative consequences that may result from it because it prevents intertemporal shifts in demand to take place.

An example of a swing that was observed before and after the VAT rate increase, similar to that in Japan, is the case of Germany.

Germany raised its VAT rate from 16 percent to 19 percent in January 2007. In January-March quarter of 2007, CPI did not show a significant increase. However, real private consumption showed a swing, a surge in the quarter ahead of the tax-rate hike and a fall after the hike. However, the fall in level of consumption in January-March quarter relative to the level before the surge (i.e. that in July-September quarter) was rather limited (Figure 3). 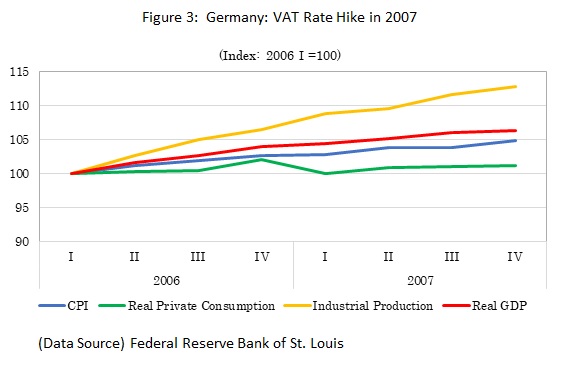 What is interesting about the German case is that neither industrial production nor real GDP was affected by drop in real private consumption. 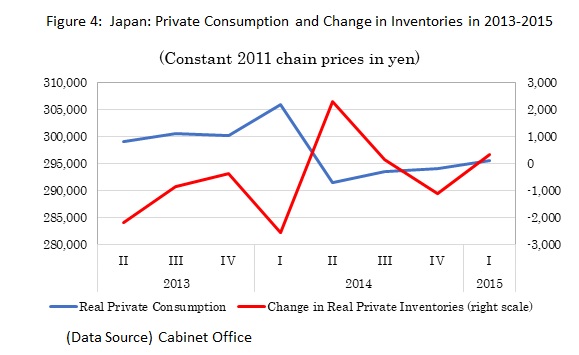 However, in the case of Japan, inventories were insufficient in working as a buffer so that industrial production and real GDP showed a big swing (Figure 1). In this sense, it may be closer to the argument made by the stock-out avoidance theory which asserts that firms fear that they may lose the business opportunity so that their production swings along with the demand rather than maintaining a smooth trend.

How can we understand the German case? It may be argued that their behavior is closer to the production-smoothing theory than Japan. Alternatively, the following may explain the difference.

First, domestic demand as a whole had been affected by private consumption only in a limited way. It is because other demand components were able to somewhat offset the negative impact of VAT tax rate hike on private consumption. 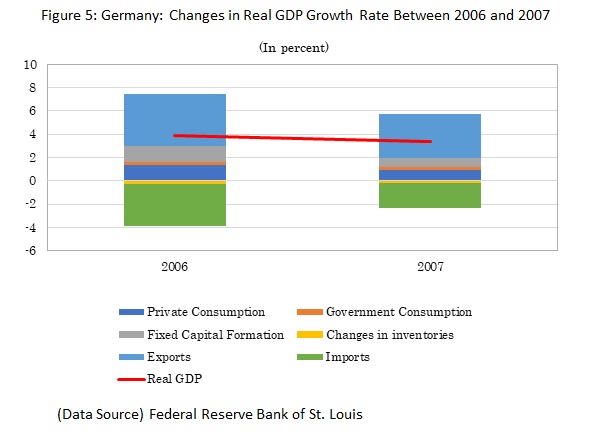 The slowdown of imports reflects the large dependence of German total final demand (domestic demand plus exports) on imports from foreign countries. In other words, it corresponds to the openness of the economy. The ratio of imports to total final demand was 35.2 percent in Germany (at 2006) compared to 16.7 percent in Japan (at FY2013). From the point of view of Japan, it implies that the strong competitiveness of Japanese products in households’ consumption expenditure benefited from the large domestic market provided by the household expenditures. However, at the same time, it made Japanese producers vulnerable to swings taking place in private consumption. The observed large negative impact of the consumption tax-rate hike on real GDP economy reflected such an economic structure.

Lessons need to be learned

We have tried to understand the reason why different countries reacted differently to increases in consumption tax/VAT rate. The UK case suggests that policies of the governments have large influence on the economic impacts of the tax-rate hikes. German case suggests that resilience and the openness of the economy matters.

Being aware of the risk of a big swing taking place again when the consumption tax rate is raised in October, the government is ready to implement measures to mitigate the potential impacts. We need to see how effective they will be and learn lessons from them. We also need to learn lessons from other countries as well.

We need to learn because, most probably, we will be seeing more consumption tax rate hikes in the future.