COVID-19 has changed the daily lives of the Japanese in many ways. In particular, one of the areas that is considered to have seen a significant change is the way payments are made.

The means of payments were already changing even before COVID-19. However, the trend was further accelerated by the Government’s promotion of cashless payments in order to offset the negative impact of the consumption tax-rate hike in October 2019: government provided rebates when cashless payments were made. But the pace of change seems to have picked up under COVID-19. In trying to avoid 3Cs (Closed spaces, Crowded places, and Close contact-settings), people chose to stay indoors and made more frequent use of internet shopping and delivery services. Even when they had to go out, use of e-money and code payments, instead of handling cash to settle purchases, became more popular.

e-money and code payments have increased

More use of cashless payments is evident in data. An example is the use of e-money. The use of e-money was on an increasing trend even before COVID-19: however, the pace seems to have accelerated in 2020, as Figure 1 shows. 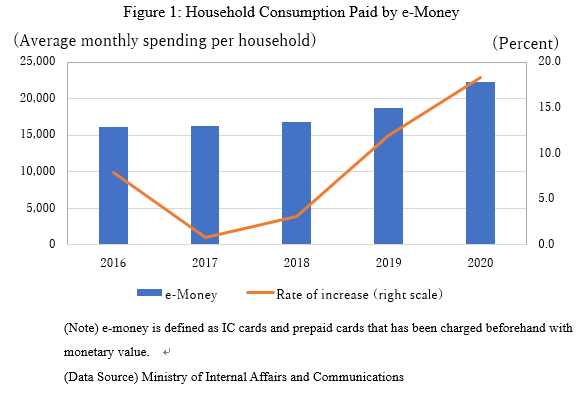 Another popular cashless payment, payments using barcodes and QR codes, have also increased. As Figure 2 shows, the increase in 2020 has been significant. 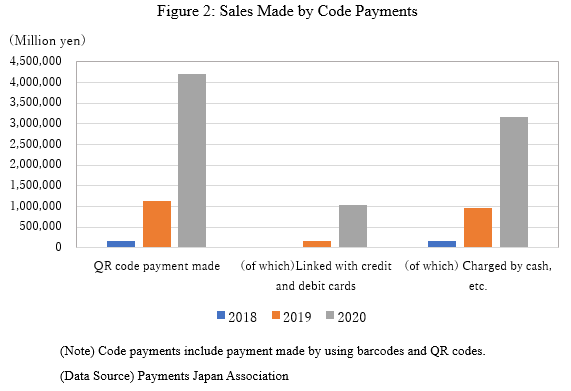 It is interesting to note that not all cashless payment saw a significant increase. The use of credit cards is an example. As Figure 3 shows, sales using credit cards that has been showing steady growth in recent years has remained almost flat in 2020 from the previous year. 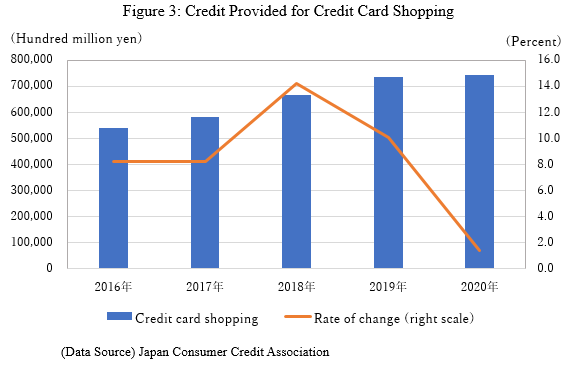 It may be due to the difference in the ease of cashless payment compared to other means, and the degree of contact with salespersons when they use them: as a result, some of the payments which were using credit card may have shifted to use of e-money and codes.

In addition, it may be because of the fall in opportunities to use credit cards, e.g. for travelling and dining. A drastic fall in travel-related spending using internet, such as those for accommodation, transportation, and traveling, can be confirmed by Figure 4. 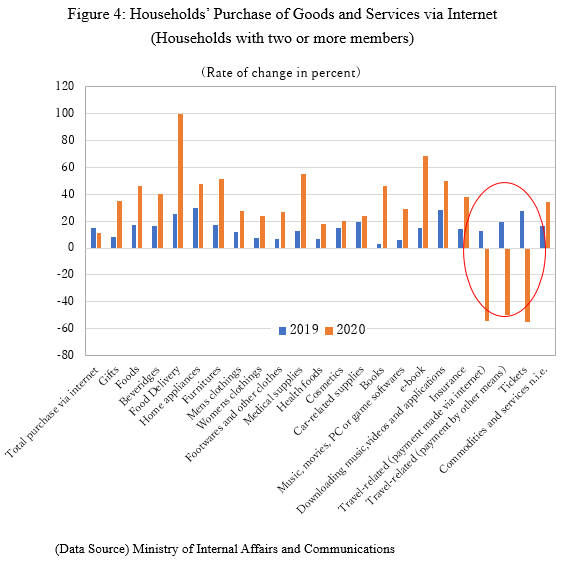 Why has circulation of cash increased? 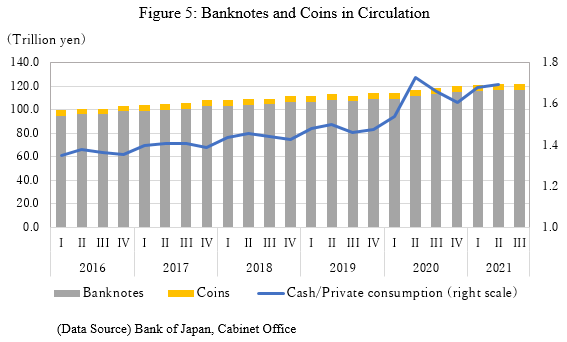 If we look at Figure 6 which shows the data on net supply of cash by the branches of the Bank of Japan (grouped by regions in the figure), we do find that branches in the regions with the largest cities, like Kanto (with Tokyo), Kinki (Osaka), and Tokai (Nagoya), show lower rate of increase in net supply of cash than in other regions. 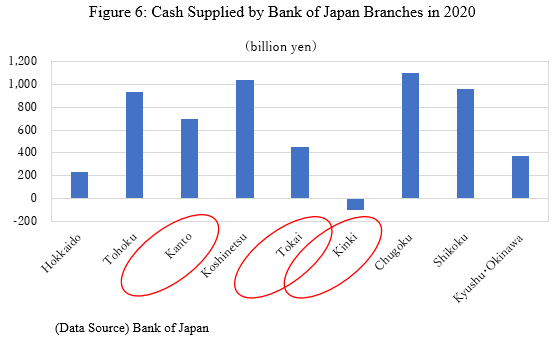 The regional differences should reflect the popularity of cashless payments in these regions. As Figure 7 shows, Kanto, Kinki, and Tokai are the regions where cashless payments have become more popular than other regions. 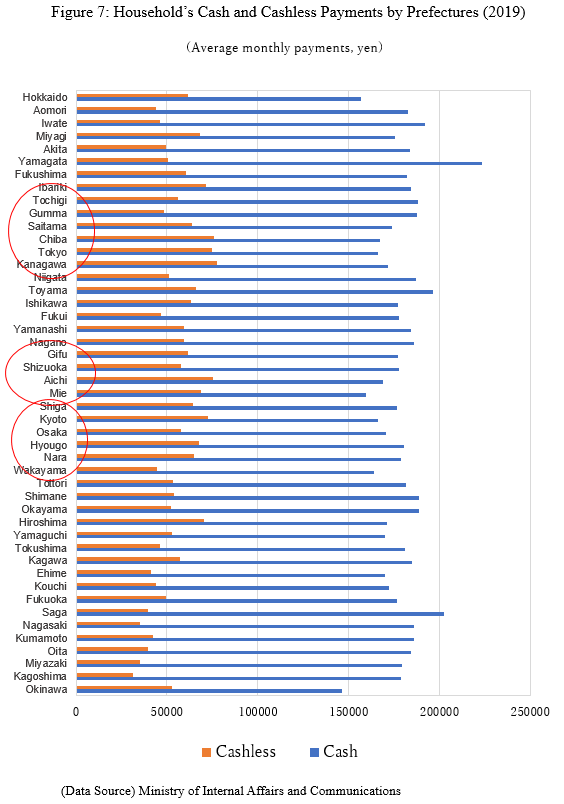 What is important about Figure 6, however, is the fact that, even though there are differences, all regions, except Kinki, is showing positive net supply of cash by the Bank of Japan: Demand for cash is expanding in spite of the increasing popularity of cashless payments.

What are the reasons behind the increase in cash even at a time when cashless payments seemed to have increased? There are two possible explanations.

First, cash might have been necessary because of the need to charge prior to the use of e-money and code payments. Needless to say, these cashless payments could be linked with credit and debit cards. However, as the set of bar charts at the far right of Figure 2 shows, a large portion of the financing came from charging (transferring monetary value) by cash etc.

Charging by cash might reflect consumers’ concern in providing the information about their credit or debit cards. Alternatively, it might reflect the consumers’ desire to be aware of how much you spend: with automatic crediting or debiting, consumers may lose track of their amount of spending. Whatever the reason may be, the way cashless payments are used in Japan may not necessarily lead to less use of cash.

Second, precautionary holdings of cash increased when faced with increasing uncertainty of the future. The main source of uncertainty is undeniably COVID-19, but occasional earthquakes, typhoons, heavy rain, power outage, and ATM system troubles may also have led people to have some cash at hand just in case.

Almost zero interest rate on deposits made cash indifferent with deposits and should have made it easier for households to hold cash than otherwise. Cash/deposit ratio, for instance, have actually increased during 2020, as Figure 8 shows. 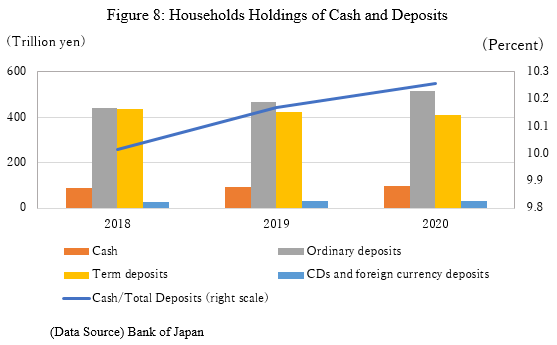 Japanese are going for cashless but are still cashful

In addition to its role as the medium of exchange, cash is still needed as means to store value. That is especially important in a society like Japan where people are often subject to disasters and where people are seemingly more risk-averse than in other countries (holding cash and deposits have been preferred over investing in stocks and investment trusts). The incentive to hold cash as store of value is further reinforced by the current monetary policy, the QQE with yield curve control, which is keeping the opportunity cost of holding cash low.

Japan’s case shows that, while an economy is becoming increasingly cashless, it can still be cashful.