Beware of the Acceleration of Deflation by COVID-19

According to the recent estimate by the Cabinet Office, as Figure 1 shows, GDP gap (the gap between actual real GDP and potential GDP) had increased to -10.5 percent of potential GDP in the second quarter of 2020. Even after some recovery in the third quarter, it is still -6.2 percent. The prevalent negative GDP gap should provide a significant downward pressure on aggregate prices. 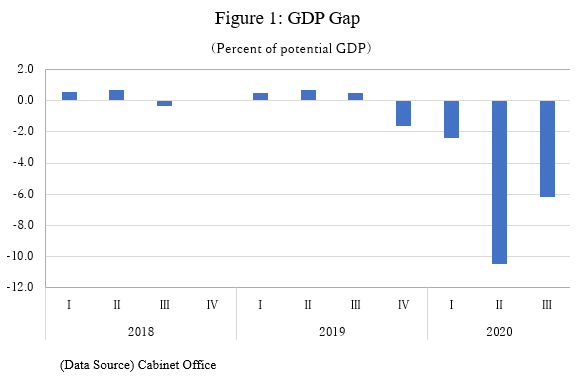 The consumer price index has actually started to fall.

Figure 2 shows the CPI series which has been adjusted for consumption-tax rate changes. It shows that the headline CPI has started to show a decline in April 2020. CPI excluding fresh food and energy, which corresponds to the trend CPI, has also started to show a decline in August 2020. While it partly reflects the some of the policy actions that tried to alleviate the burden on consumers (such as the price-discount by the Go-To-Travel campaign), it is clear that there are signs of deflation accelerating. 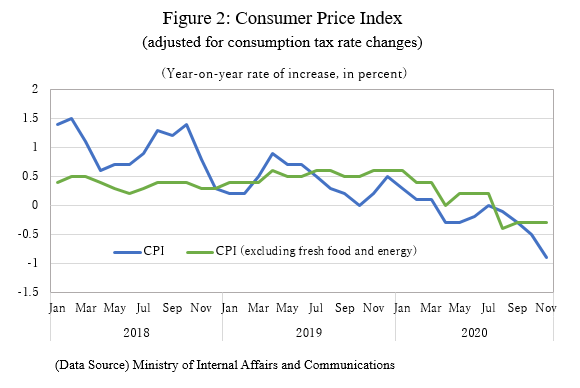 Why is there an increase in GDP deflator?

If the Japanese economy is heading towards acceleration of deflation, we might expect that GDP deflator would fall as well. However, the GDP deflator has not shown signs of falling. As Figure 3 shows, the year-on-year rate, even after taking into account the impact of consumption tax rate hike, which took place in October 2019 and which would raise the year-on-year rate for four following quarters, does not show a downward trend. It may seem puzzling that, while the CPI is showing a downward trend, GDP deflator has not. The clue to the puzzle can be found when we recognize that GDP deflator is not an indicator of aggregate prices but is an indicator of value added per unit of production (obtained by nominal GDP divided by real GDP). GDP deflator, or the value added per unit of production, seems to have increased because of the improvement in the terms of trade due to the global crisis brought about by the COVID-19. 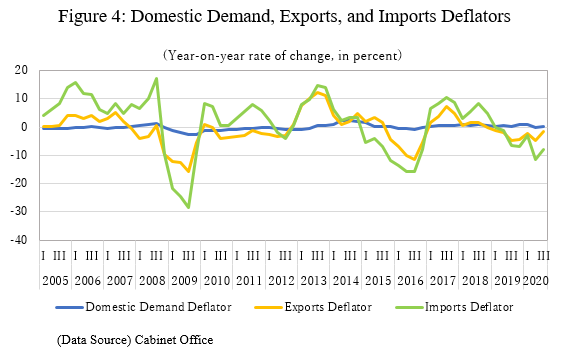 Special feature of the adjustment process in Japan

In addition, if we recall that value added per unit of production is a sum of unit labor cost and unit profit, we are able to see the special feature of the adjustment that is taking place in Japan. According to Figure 5, there was an increase in unit labor cost and a decline in unit profit that took place in the second and the third quarters of 2020. It suggests that the lifetime employment system and the government’s support to maintain employment (e.g. Employment Adjustment Subsidy program) have prevented the crisis to affect the workers in the short-term. In exchange, the drop of unit profit has been significant. It shows that the burden of adjustment in the initial phase of the COVID-19 crisis was borne more by the firms than by workers.

(If we further take into account the fact that the indicator of profit presented here is the residual after subtracting compensation of employees from nominal GDP, profits presented her should include consumption of capital and indirect tax minus subsidies. Since there was an increase in consumption tax rate that should have increased the tax revenue raised by indirect tax revenue, the actual drop in unit profit should have been more significant.) 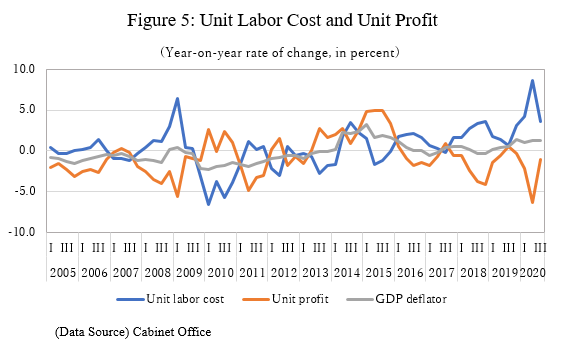 Again, a similar pattern was witnessed in the period immediately after the collapse of the Lehman Brothers as well. The commonality suggests that the special feature of the employment system is actually behind the pattern of adjustment taking place in Japan.

A fall in GDP deflator to follow: confirmation of deflation accelerating

It should be important to note, at this point, what had happened in 2009 after the initial adjustment to the Lehman shock took place. It shows that, after the second quarter of 2009, unit labor cost had started in slow-down and eventually decline and unit profit to recover. As a result, GDP deflator also started to drop after the second quarter of 2009. The process shows that an adjustment in labor market would eventually take place with a lag.

If we assume that a similar adjustment process will take place this time as well, we should be seeing a drop in GDP deflator in 2021. That should be the time when we are able to confirm that deflation has actually started to accelerate once again. We have to be ready to engage in another round of a battle with deflation.