This year’s “Basic Policies” (or “Honebuto-no-Hoshin,” as is widely known in Japanese) included a number of important policy changes. Among them was the change made in the policy towards unskilled foreign workers.

To date, foreign workers are restricted to those who are identified as having “professional or technical skills.” In particular, highly-skilled foreign professionals are encouraged to stay in Japan by accumulating points under the Points-Based System introduced in 2012. On the other-hand, foreign workers, in principle, cannot enter Japan to work as unskilled workers.

However, it does not mean that foreigners were not able to work as unskilled workers. In fact, there have been exceptions to this principle. Permanent residents, spouses or children of Japanese nationals, spouses or children of permanent residents, and long-term residents can work without any limit. Trainees who have entered Japan under the technical internship program can work as unskilled workers in their specified areas. Nursing and long-term workers who came under the Economic Partnership Programs can work in their designated areas. Foreign students of universities and schools can also engage in part-time unskilled labor within certain limits.

Foreign workers who work in Japan have rapidly increased in the recent years. During the year to end-October 2017, the total number of foreign workers increased by 18.0 percent. However, the number is still 1,278,670, or only 1.9 percent of the total labor force in Japan (Figure 1). 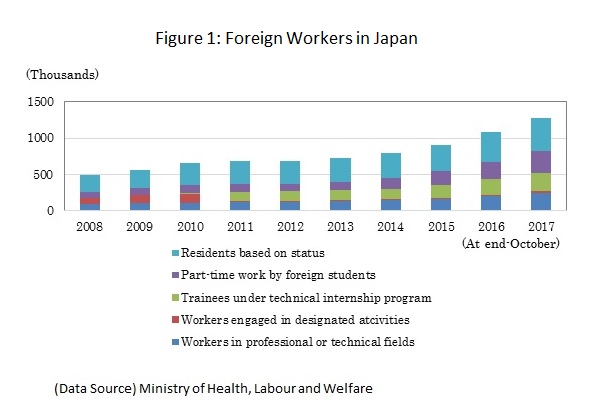 The breakdown for 2017 shows that those who entered Japan under the status of workers with “professional and technical skills” are 18.6 percent of the total. The rest is those who are working or can potentially work as unskilled workers.

The apparent change in the policy towards unskilled foreign workers is a result of the tight labor market situation witnessed in Japan. The unemployment rate has fallen to as low as 2.2 percent by May 2018, far below the 3 percent which was considered to be the structural unemployment rate (or the rate corresponding to full-employment after any labor demand and supply mismatches are taken into account). It has led to labor-shortages in various sectors of the economy.

At the background is the long-term trend of shrinking population in Japan. The population of those aged 15 years or over is expected to shrink from 111 million in 2015 to 79 million in 2065, an average rate of decline of 0.7 percent per annum (Figure 2). 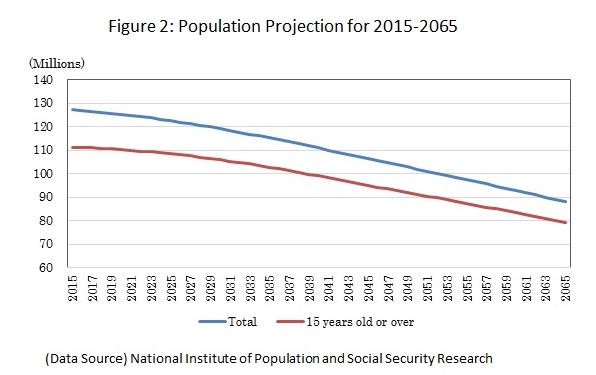 In order to offset the negative impact on the labor force coming from this demographic change, labor force participation rate has risen in the recent years, particularly for females and the aged. As a result, employment was able to expand by a significant fall in those who were “not in labor force.” (Figure 3). 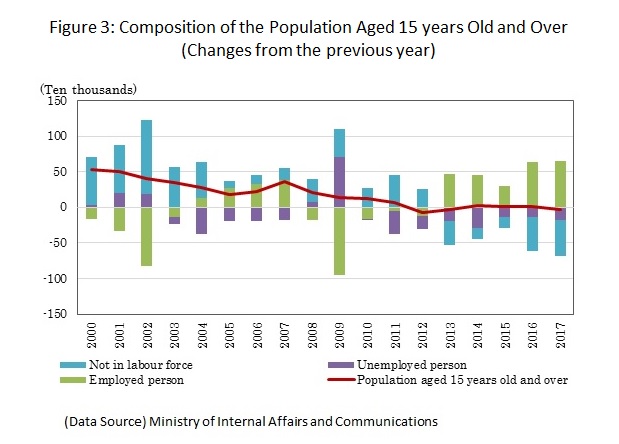 However, there is a limit to how much a rise in labor force participation rate can offset the negative impact: the rate for the aged are already high in Japan, and the rate for females, who have long been subject to the M-curve, is quickly rising. It was therefore necessary for the government to consider change in its policy towards foreign workers if the Japanese economy was to sustain economic growth. If the decline in population of those who are 15 years and above is to be filled by foreign workers alone, foreign workers need to come to Japan by 770 thousand per annum.

If the sectors are to be determined on the basis of job offers-to-applicants ratio (higher ratio implying strong excess demand for labor), it would most likely to be in the area of safety control (6.75 at May 2018), construction (4.30), service (3.22), and transportation (2.33). They are also sectors with high vacancy rates.

Will foreign workers come to Japan?

Finally, it should be noted that, whether foreign workers would be able to work in Japan or not, depends not only on the decision by the Japanese government, but also on the availability of workers of the countries of origin.

It is important to bear in mind that Asian countries, the countries we implicitly assume to be of the origin of the foreign workers coming to Japan, are also quickly aging and showing slower population growth. According to the 2017 Revision of the World Population Prospects by the United Nations, population is expected to start declining in late 2020s and early 2030s in economies like Thailand (from 2028), China (from 2030), Taiwan (from 2032), Sri Lanka (from 2034), and Korea (from 2035). In expectation of the development, Taiwan and Korea is at the forefront in trying to attract foreign workers to their economies.

Japan needs to make decisions quickly. The worst scenario for Japan is to see no one coming to Japan when it finally decides, after a prolonged debate, to open the country to unskilled foreign workers.