Can Structural Policies Offset Demographic Headwinds:Comments on the IMF’s View

Documents of the IMF’s 2018 Article IV Consultation with Japan was released last November. The main theme of the Consultation was the impact of the demographic changes that is taking place and whether the headwinds brought about by the changes can be offset by structural policies.

The Staff Report for the Consultation proposes a reinvigorated reform agenda that includes labor market reforms, product market and corporate reforms, and trade liberalization and FDI promotion. The Report emphasizes the importance of the reform agenda by providing a set of simulations showing the quantitative impact of these policies using their GIMF (Global Integrated Monetary and Fiscal Model)*.

Reform agenda proposed by the IMF is the following (for more details, see IMF, 2018):

The second-tier reform “product market and corporate reforms to lift productivity and investment” includes facilitating exit of non-viable small- and medium-sized enterprises and entry of firms with stronger potential; continued deregulation by lowering barriers to entry, removing incumbents’ protections in some industries, deregulating professional services, and expediting deregulation in Special Economic Zones; deeper corporate governance reform by more ambitious requirements for outside directors, explicit limits on cross-shareholdings, and enhanced transparency of beneficial ownership; and broader adoption of automation and AI.

The third-tier reform “trade liberalization and FDI promotion to strengthen investment and growth” includes further removal of tariff and non-tariff barriers in the context of high-standard multilateral trade agreements.

IMF’s simulation results on the impacts

As for the impact of the proposed reform agenda, a set of simulations are provided which shows the impact relative to the baseline current policies scenario.

The baseline current policies scenario, which incorporates the population forecast provided by the National Institute of Population and Social Security Research, shows that real GDP will decline by 25 percent in 40 years because of the negative impact coming from the demographic changes (Figure1). 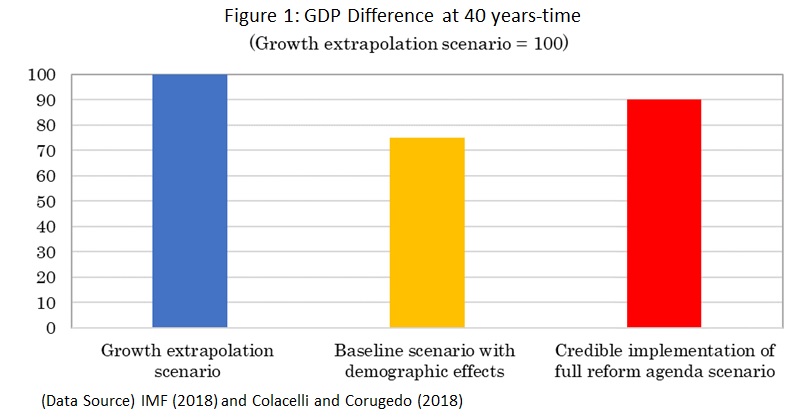 In comparison, when the proposed reform agenda is fully implemented in a credible manner, real GDP is expected to be higher by 15 percent in 40 years relative to the baseline scenario (Figure1).

Comments on the IMF’s view

The reform proposal is very ambitious, and the simulations are also very informative. I think they will provide a good basis for policy discussion on the structural policies needed to take place. However, I also see limitation about their proposal.

First, the baseline scenario with a decline of real GDP by 25 percent in 40 years, while it may look significant, is actually not that drastic. In annual terms, it is a decline by 0.7-0.8 percent. According to Colacelli and Corugedo (2018), which provides details of the simulations, the baseline current policies scenario is relative to a simulation where the economy is assumed to grow by 1.3 percent. It means that, even under the pressure coming from demographic changes, the Japanese economy is still able to grow by 0.5-0.6 percent on average over the next 40 years (Figure2). It is not that bad for a country which expects an average population decline of 0.7 percent per annum for the next 40 years. (It should be noted that the growth in the long-term will be negative if the impact of the demographic change is applied to the IMF’s view of the potential growth rate of 0.5-0.6 percent.) 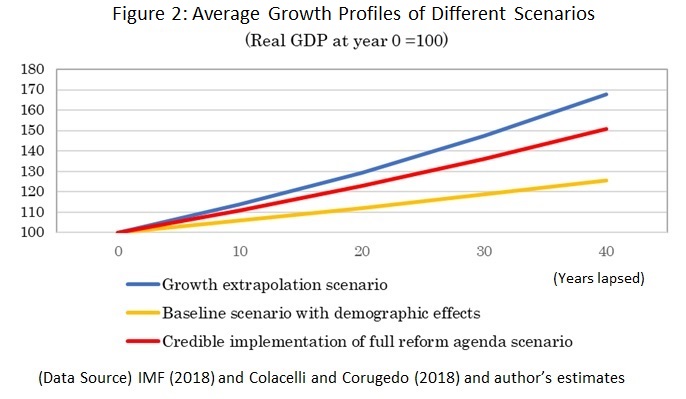 Second, the credible implementation of the full reform agenda, which enables an upward recovery of 15 percent of real GDP in 40 years, has only a limited impact on the real GDP growth during the period by a magnitude of 0.4-0.5 percent per annum. It shows that the reform agenda falls short of offsetting the demographic headwinds that the Japanese economy faces (Figure2).

Third, the proposed reform agenda includes only policies that are of one-time nature. Policies such as a shift of regular and non-regular workers to “intermediate contracts”; raising participation rates of women and older workers; deregulation of industries and professional service; and trade liberalization, are all important policies which should be implemented. However, the impact on the economy cannot be sustained by extending these reforms further into the future: It is because, once they are achieved, there is no more room to tap for most of the proposed reforms**.

Need for a more sustainable and fundamental reform proposal

The last point is crucial. The population decline is expected to take place even after 40 years have lapsed. However, the proposed reform agenda, if fully implemented in the next the 40 years, cannot be relied on anymore. This shows the limitation of the proposal made by the IMF.

The limitation comes from the fact that the proposal do not include more sustainable and fundamental reform measures such as policies to promote innovation and to invest in human capital, and policies to raise the fertility and marriage rates. While accepting more foreign workers is already included, the mag nitude can also be revised to offset more fully the decline in work force***.

If the time horizon is to be extended beyond 40 years-time, more sustainable and fundamental reform measures are needed.

Notes
* IMF (2018) refers to the simulation done by Colacelli and Corugedo (2018). It should be noted, however, that the latter says “the studied structural reform package encompasses three broad categories of proposed reforms taken from the IMF’s 2017 Japan Article IV Consultation” (page 7).
** An exception is the increase in migration of foreign workers which will be mentioned later.
*** According to Colacelli and Corugedo (2018), simulations assume “increased migration that lifts the labor force in Japan by 1 percent would increase potential growth by 0.15 percent points over 10 years” (P.8). It should imply that the assumed migration is to take place over the next 40 years.