Catching Up to the Global Standard in Global Warming and Diversity

Falling behind the global standard

Japan used to be famous in the field of products for their high quality and safety. Japan was also leading the world in terms of energy efficiency. In fact, Japan has been setting the global standard in many areas of economic and social area.

However, recently, there are evidences that Japan is no longer leading the world, and, in fact, it is now falling behind the global standard.

Lack of improvement in dealing with global warming

One of the recent important examples in that respect is the lack of improvement in carbon emission. As Figure 1 shows, greenhouse gas emission per unit was low in Japan compared to other OECD countries in 1990. However, since then other countries made progress in reducing the emission while that in Japan was relatively limited. As a result, Japan who had the 9th lowest per GDP emission in OECD in 1990 fell to 22nd in 2015. 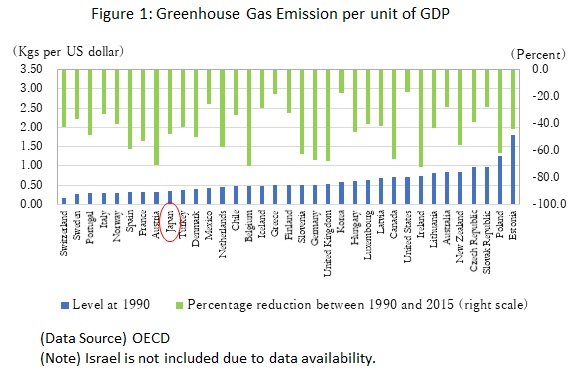 In fact, dependence on coal as a source of primary energy has increased between 1995 and 2014: in the COP 25 held in Madrid last December, Japan won the “Fossil of the Day” prize from an NGO.

Lack of improvement in gender equality

The other example is the lack of improvement in gender equality. According to the Global Gender Gap Index 2020 of the World Economic Forum (WEF), the ranking of Japan fell to 121th, a fall by 11 ranks from the previous year. The main difference with the world average comes from the low political empowerment of females in Japan. However, economic participation of and opportunities opened up for females are also far from parity.

Figure 2 shows that the ratio of labor force participation rate for females relative to that of males has made only a small improvement compared to other countries. 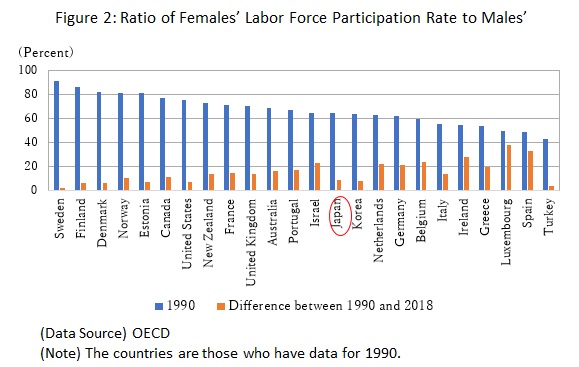 The backwardness in diversity in Japan can be seen in two other important areas as well.

Lack of improvement in immigration

One is in immigration. Japan has been strict in inviting immigrants for a long time. There has been changes in recent years, such as promoting inflows of highly-skilled workers under the point-based system introduced in 2012 and of medium skilled workers by creating a new status of residence in 2019.

However, according to the United Nations, the share of migrants in total population is still low compared to other countries (Figure 3). 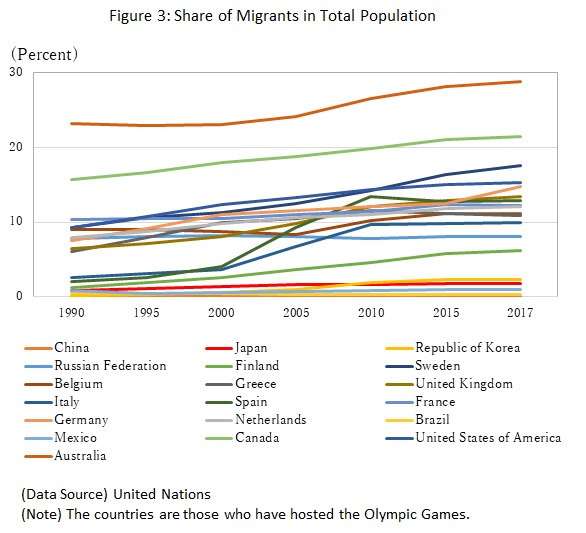 Lack of improvement in employment of the disabled

Second is in the labor force participation of the disabled. Employment of the disabled has been promoted in the recent years by introducing legislative targets for each of the sectors in the economy: e.g. 2.2 percent for private companies and 2.5 percent for government institutions. The target is low if we consider the fact that about 7.6 percent of the total population are disabled.

Nevertheless, the targets have not been achieved according to the result of the survey on the employment of the disabled by the Ministry of Health, Labour and Welfare published in December 25. As it is shown on Figure 4, actual employment rate in the private companies are 2.11 percent (only 48 percent of the companies have achieved the target) and in the government institutions 2.31 percent. 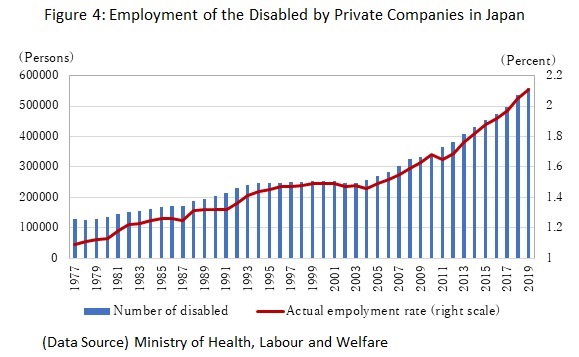 Are we engaging in a social damping?

Reducing greenhouse gas by relying on renewable energy resources and increasing diversity is important for the sustainable and equitable development of the economy. It should also be beneficial for a long-term economic growth point of view.

However, promoting these initiatives would raise the cost in the short-term. That is why the Japanese companies and the government have been reluctant in making progress in these areas, allowing Japan to fall behind the global standard.

However, it means that the Japanese companies have improved the competitive position over other companies by avoiding having to pay the cost which others have paid in order to adopt the global standard. It may seem from others that Japan has been engaging in a social damping.

Make the most of the 2020 Tokyo Olympic and Paralympic Games

We have to redirect the policies so that we will adapt to the global standard in these areas as a responsible member of the international community.

In this respect, the 2020 Tokyo Olympic and Paralympic Games are going to provide us with an opportunity to think about the current situation of diversity by witnessing the admirable performance of diversified individuals. We can also think about the ecological implications of the Games through the operations and procurement of the Games. The progress made in these respects are what I would like to see as the legacy of the 2020 Tokyo Olympic and Paralympic Games.