Changes in Japanese Employment Under COVID-19

COVD-19 has led to some significant changes to the employment situation in Japan. In this month’s column, these changes will be summarized by comparing what happened in CY2020 with CY2019 using the Labor Force Survey.

This does not mean that those aged between 15 and 64 did not have any problems. It is not only because there were in significant increase in the number of unemployed for these aged group, as we will see later, but because of the significant increase in the number of young people who are not engaged in either education or housework. Those who belong to this category in the age group of 15-24 increased by 130 thousand, largest increase in the recent years. From the point of view of enthusiasm to work and accumulation of experiences and skills, it is a worrying situation.

Unemployed increased because of the unfavorable business conditions 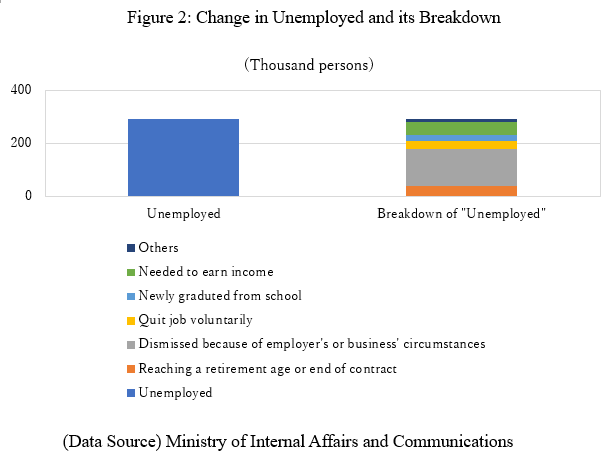 It should be noted that the increase in the number of unemployed was rather limited compared to the decline in economic activity and relative to the situation in countries like the United States where unemployment rate shot up to more that 14 percent at the peak of the crisis. That is because there was a significant number of workers who were asked to be on leave with pay in Japan. The number of employees who were on leave with pay increased by 680 thousand. If the number of the increase in those who were on leave with pay, inclusive of those in the self-employed and family workers, had been dismissed rather than hoarded, the unemployment rate of Japan in CY2020 could have been 3.9 percent instead of the official 2.8 percent.

Both self-employed and employees declined 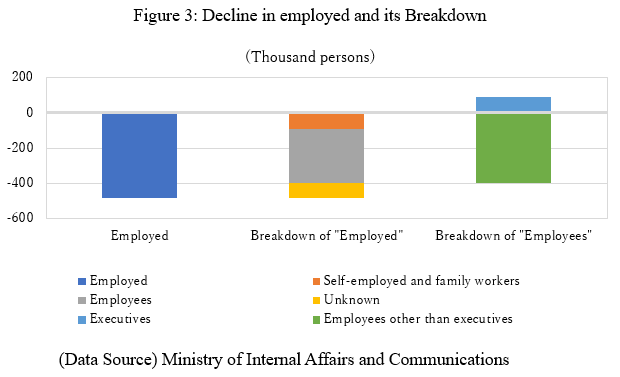 Employees consist of executives and employees other than executives. Executives seems to have increased by 90 thousand, leaving employees to decline significantly by 40 thousand (Figure 3).

Female regular workers increased the most 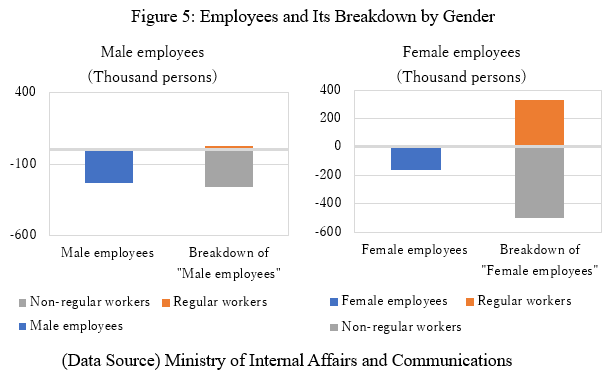 Where did the increase in female regular workers take place? The breakdown of changes in the number of female employees by industries shows that increase in female workers was significant (increase by more than 30 thousand) in the industries such as manufacturing, information and communications, wholesale and retail trade, finance and insurance, real estate and leasing, education and learning support, medical and social welfare, and government services (Figure 6). 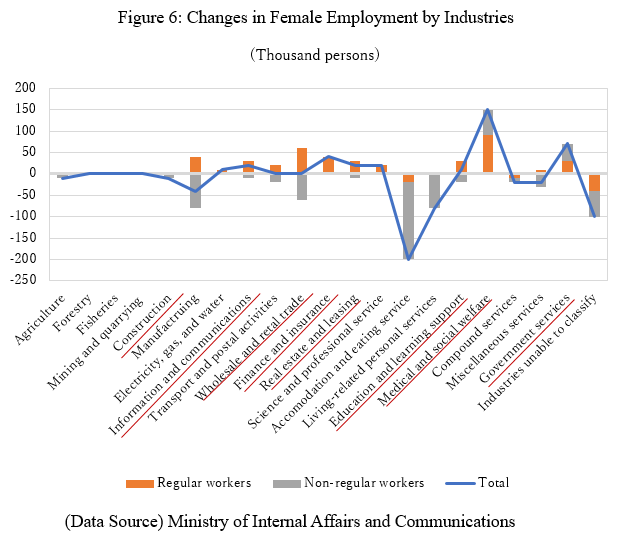 Is it a permanent change, or only temporary?

What we have seen shows that there may be a significant change taking place in the Japanese employment under COVID-19. That is especially the case with female employment: female regular workers are increasing steadily even under the unfavorable business conditions brought about by the pandemic.

The increase in female regular workers may be reflecting a trend towards better employment situation for females. Many of the industries which are increasing female regular workers coincide with industries which are apparently expecting better prospects in the near future: it can be confirmed by the result of the recent business confidence survey in the Tankan or the performance of stock prices by industrial groups. In order to secure employment for future development, these industries may be looking at female workers as a pool of talented workforce. In order to attract the female workers, they seem to be offering employment with lifetime commitment to them including mid-career workers.

However, the situation under COVID-19 is still uncertain, and what a waits after the pandemic is even more difficult to foresee. Whether the changes taking place in employment are structural and would be sustained for some time or are only temporary in nature and soon be reversed still needs to be seen.