Concentration to Tokyo and Agglomeration

Figure 1 shows the updated evidence of the convergence in Japanese prefectures. It takes the logarithms of real gross prefectural product (expenditure-side) per employed in 1975 on the horizontal axis, and average real growth rate of gross prefectural product (expenditure-side) per employed between 1975 and 2014 on the vertical axis. It shows a negative correlation between the two, confirming the convergence hypothesis. 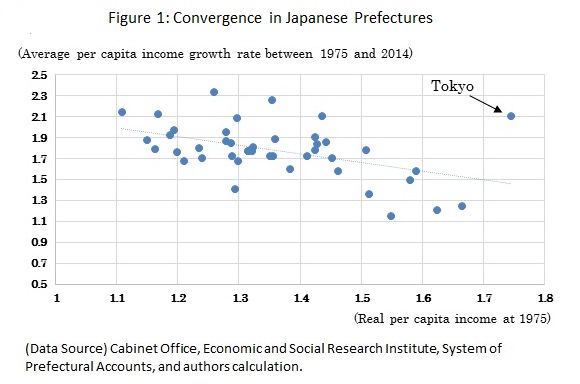 Why is Tokyo an outlier?

However, we can also see that there is a outlier in the north-east of the figure. The outlier is, of course, Tokyo which has a higher per capita growth rate as well as having a high per capita income to start with.

How can we understand the performance of Tokyo?

Another way to understand it is from agglomeration point-of-view. Clustering to big cities has its negative aspects: e.g. increase in congestion, worsening of pollution, higher rise in land price and rents. Nevertheless, big cities grow because of its positive aspects: e.g. stronger promotion of new ideas and new inventions, easier absorption of asymmetric shocks, better matching of transactions between economic agents, faster reduction of transaction costs, and wider variety of available goods and services.

Innovation aspect of agglomeration can be seen in Figure 2. It takes the number of employed on the horizontal axis, and real gross prefectural products (expenditure-side) per employed on the vertical axis. 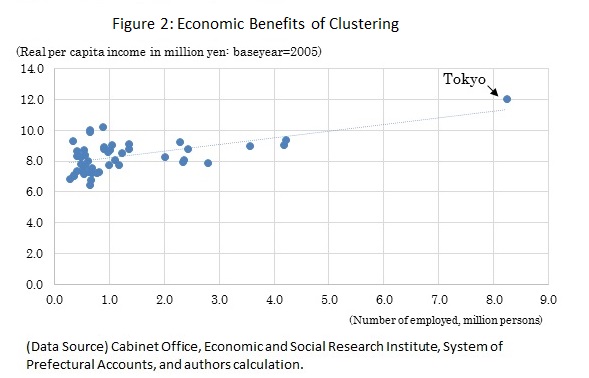 It shows a positive correlation: more clustering of workers leads to higher labor productivity. It is consistent with the view that clustering invites more investment into the area as well as stimulating innovation, thus providing positive impact on the economy. Concentration to Tokyo should be supported in this respect.

To allow, or not to allow concentration?

Undeniably, there are arguments against further concentration of population and economic activities to Tokyo. Policy measures have been introduced to put a stop to the concentration and disperse population and economic activities to other areas of Japan. One recent example is a plan to restrict the number of students enrolled in private universities located within the 23 wards of Tokyo.

It is also a fact that urban economics tells us that urbanization tends to overshoot the optimal size (overurbanization). In such a case restricting clustering shall be justified.

However, the innovation aspect of agglomeration is important if we think about the aging and shrinking of the population that is expected to take place in Japan in the long-term. If we cannot put a stop to the demographic trend, which is almost certain, we need to think of ways to offset its negative impact on potential growth rate, among others.

Raising productivity, particularly stimulating innovation, is obviously an important option available to us. The supply-side of innovation, however, does not allow optimism in this respect because, as a part of the impact of aging and shrinking population, number of scientists and engineers are not growing. It is difficult to imagine how a fewer researchers would be able to produce more innovation.

Under such circumstances, stimulating innovation through agglomeration is an interesting way to overcome the quantity restraint. Agglomeration may partly make up for the adverse demographic changes that handicaps innovation.

We need to think about concentration to Tokyo from a wider perspective.