Shareholding structure in Japan has shown a big change since 1990s. As a result of the burst of the bubble economy, and in response to the government’s effort to reduce the cross- shareholdings by the commercial banks and companies, the share of their shareholdings in total shares issued has declined. In their place, shares held by foreign investors and trust banks (reflecting the increase in pension funds) has increased considerably (Figure 1). 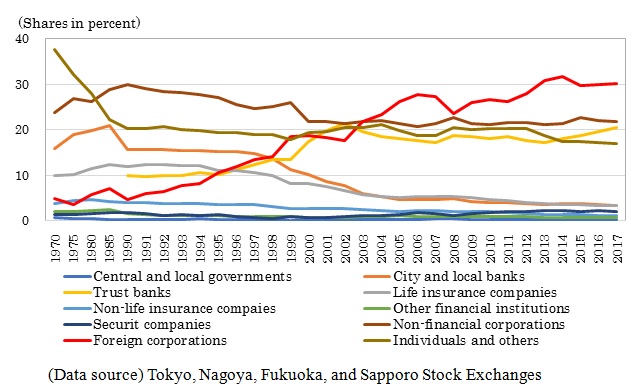 In face of the widely-spread cross-shareholding, the pressure of shareholders on company executives had been very limited. That is the reason why the corporate governance in Japan traditionally depended largely on main-banks until 1980s. However, since 1990s, large Japanese companies reduced their dependence on bank lending, removing the basis for main-banks to provide governance. It has led to a situation where no significant party is providing pressure to the company executives: a “harrowing out” of corporate governance. Thus, increase in foreign and institutional investors potentially should have large impact on company directors.

There have been initiatives to support strengthening of corporate governance as well. Introduction of the Stewardship Code by the Financial Service Agency in 2014, and the Corporate Governance Code by the Tokyo Stock Exchange in 2015 are such examples (they have also been revised in 2017 and 2018, respectively). In addition, the government introduced a series of legislations that facilitates companies to adopt a new corporate structures that strengthen corporate governance. In the following, traditional corporate structure of the Japanese companies and how it has changed, or has not, will be discussed.

Traditionally, large public Japanese companies had, as their corporate structure, a board of directors and a board of company auditors. Both consisted of more than three persons, but in the case of company auditors, half or more of them need to be outside auditors, and at least one of them should have a full-time position. The board of directors, in turn, appointed from among them representative directors and other directors who are responsible for the execution of the operations of the company.

In view of the effectiveness of the corporate governance, such structure had some weakness.

First, board of directors and board of company auditors were separate bodies so that audits of the execution of the duties by directors had to be made from outside of the board of directors. In terms of available information and leverage, there would be a constraint on what could be done.

These points can be considered to be weakness of the traditional corporate structure from the point of view of corporate governance. That was at the background of the change in the legislation that introduced, in 2003, corporate structure that has three committees, namely nominating, compensation, and audit committees, within the board of directors.

With this kind of a corporate structure, director have less opportunities to influence nomination and compensation towards their own interest. In addition, auditing can take place from within the board of directors providing them with more information and leverage.

The corporate structure resembles that of the United States which gives a significant role to outside directors and separates the function of execution of operation from the directors. It is a significantly different from the traditional Japanese corporate structure and would need a big leap for them if they are to adopt it. This seems to be the reason why there is only a limited number of companies that has adopted the new corporate structure (Figure 2). Out of 2102 companies listed in the first section of the Tokyo Stock Exchange in August 2018, there were only 60 such companies and the number have not increased in the recent years 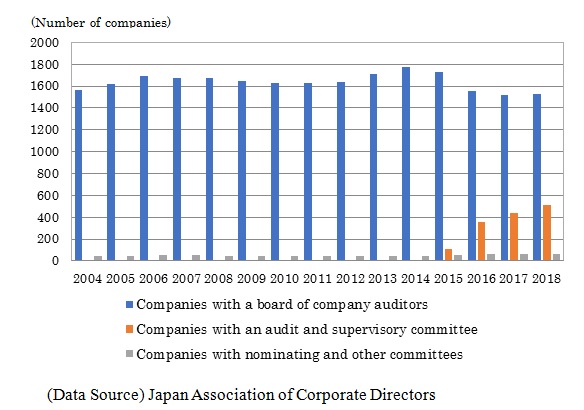 Corporate structure with a single committee

The government have also introduced an incentive to companies to adopt the single committee structure. For companies that has the traditional structure, there needs to be at least two outside auditors. In addition, the new corporate governance code introduced in 2015, companies have to explain if they do not comply with the recommendation of having more than two outside directors. It means that they have to have at least four outsiders in the company if they want to keep the traditional structure. On the other hand, if a company adopts the single committee structure, there needs to be only two outside directors that would also be the members of the auditing and supervising committee.

As a result, there is an increasing number of companies which adopted the single committee structure (Figure 2). The number has grown to about a fourth (513 companies) of the total companies that are listed in the first section of the TSE.

More recent trend is for companies to introduce nominating and/or compensation committees voluntarily, without formally adopting the three committees or a single committee corporate structure, to show their willingness to strengthen the corporate governance of their companies (Figure 3). 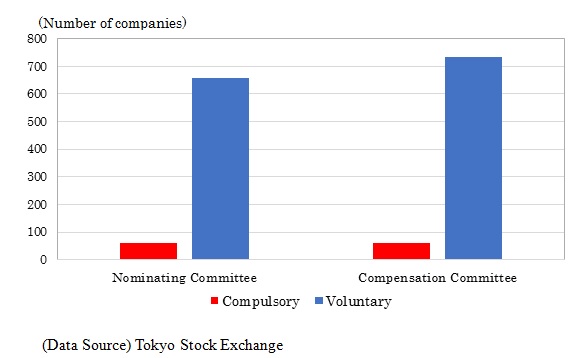 However, it should be noted that about half of the voluntary committees only has outside directors that are minority in committee members (Figure 4), and about half has inside directors as the chairman of the committees (Figure 5). It shows that there is a limitation in terms of the effectiveness of the corporate governance that it can provide. 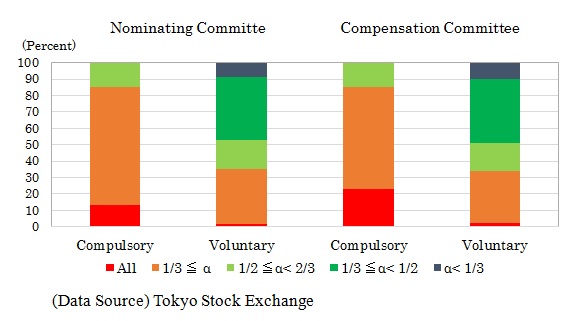 Figure 5: Chairman of the Committees 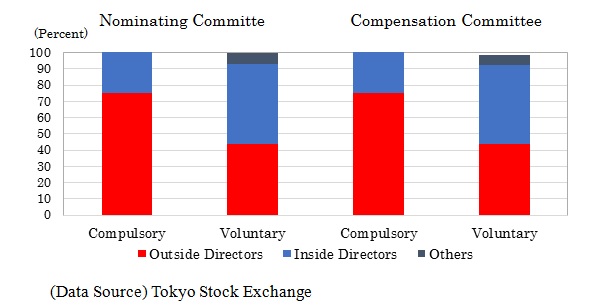 Pool of potential outside directors needed

As we have seen, there has been a progress towards strengthening corporate governance in Japan. However, it has been a slow one. It could be one of the reasons why we have recently been witnessing a series of problems in the Japanese companies which could have been prevented if there was a stronger corporate governance.

In concluding, it should be noted that stronger corporate governance requires ample pool of people who are qualified to be outside directors of companies. In this respect, the situation in Japan is far from satisfactory: Many of the outside directors in Japan have duties in more than one companies. If Japan is to strengthen corporate governance, we also need to have more pool of qualified people to support it.