Money supply is increasing very rapidly in Japan. According to the latest money stock statistics published by the Bank of Japan, M2 has increased by 9.2 percent, and M3 by 7.6 percent, over the same month previous year.

It may be seen as a natural outcome of the increase in monetary base that has been introduced by the Bank of Japan as a part of the quantitative and qualitative monetary easing (QQE). However, it is not as easy as that. As Figure 1 shows, the relationship between the monetary base and the money supply seems to have changed. Compared to the early stages of the QQE, growth rate of monetary base in monetary base is more limited: however, the growth rate of M3 is larger. The change seems have started in mid-2020, suggesting that it may be related to the spread of COVID-19, and/or the measures to address the pandemic. 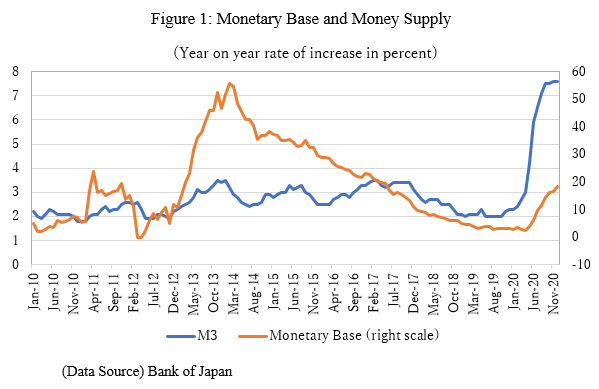 To see what is behind the steep growth of the money supply, we need to see which component of the money supply has increased in the recent months. According to the breakdown of the growth of M3, as shown in Figure 2, the growth is due to the increase in deposit money: Other components such as currency in circulation and certificates of deposits (CDs) also have a higher rate of increase than before, but the contribution to the growth of M3 is limited. As for quasi-money, it continues to show a decline. 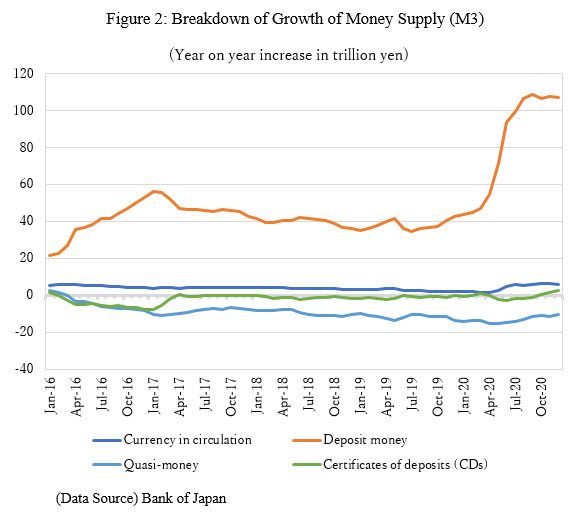 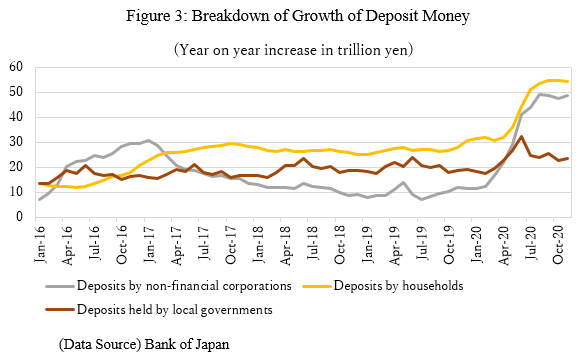 We are able to seek more information about the growth in deposits held by households and non-financial corporations. More specifically, we can find a breakdown of them by the size of total deposits.

If we look at Figure 4 for a breakdown of the growth of deposits held by households by the size of total deposits, we find that the increase in deposits can be seen for small depositors whose total deposit is less than 100 million yen. 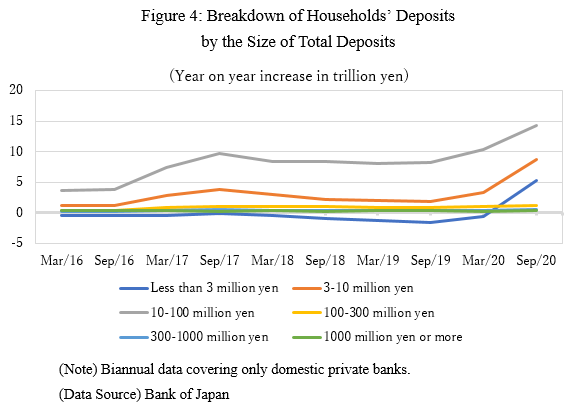 The breakdown of deposits held by non-financial corporation by size of total deposits shown in Figure 5 provides somewhat a different picture. It suggests that it was the large corporations as well as medium-sized corporations that increased deposits. In comparison, the growth of small depositors, presumably small corporations, have seen only a limited increase in their deposits. 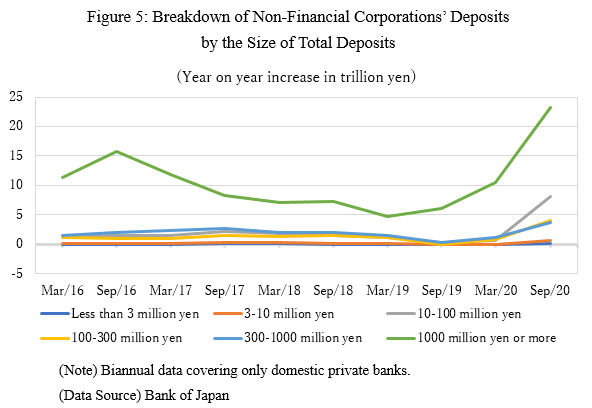 Why has deposit money increased so much? One possibility is that bank lending has increased so that households and non-financial corporations were able to increase deposits. It is the usual channel that is expected to operate when there is a monetary easing whose aim is to increase money supply and stimulate real economic activities.

According to Figure 6, however, bank lending does seem to have increased for large and small corporations since mid-2020. It should reflect the government’s and the Bank of Japan’s measures to encourage bank lending to overcome the negative influences of COVID-19. 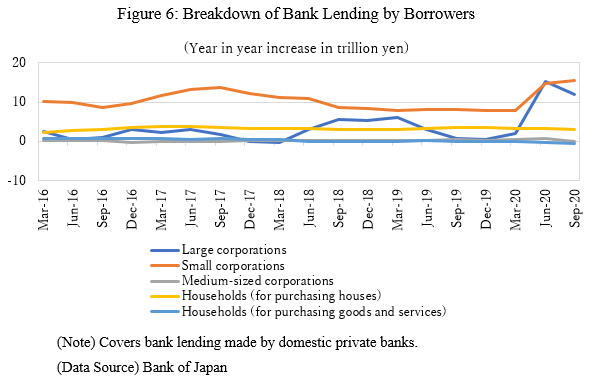 One reason for the gap could be explained by the difficulties that small corporations are facing. They may be making use of the borrowings to pay the rents and others items which are necessarily to keep the business going. If that is the case, the deposit should be transferred from the payer’s account to the account of the payee who could be a larger corporation.

Increase in fiscal transfers to households

There was certainly a decrease in spending by households because of the constraint on spending: spending opportunities were constrained, both from demand-side and supply- side, by the declaration of state of emergency and other reactions to overcome COVID-19: households had to stay home and the producers of goods and services had to shut-down business or shorten business hours. 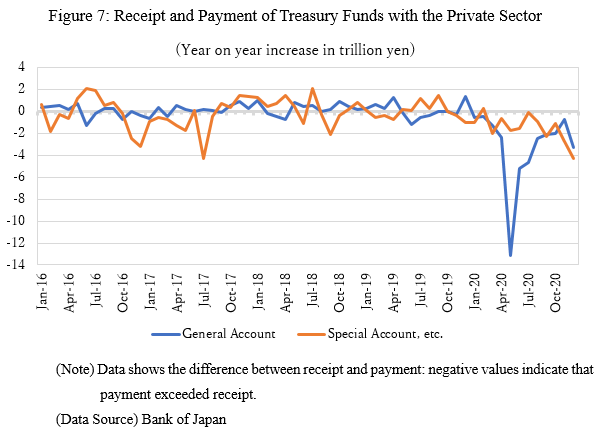 What we have found shows that the significance growth in money supply we see recently has much to do with the fiscal policy than with monetary policy: It is a result of a helicopter money kind of measures that has been taken.

Even that is the case, increase in money supply could stimulate economic activity, if it could be spent. The difficulty of the current situation, however, is that spending is difficult in a situation under COVID-19. We will not be able to expect so much of an economic activity until we are able to overcome COVID-19 by introduction of vaccinees and remedies.