Macroeconomic performance after April is poorer than expected

However, the macroeconomic performance turned out to be poorer. As Fig.1 shows, industrial production, which recorded a peak this January, gradually lost steam and its level in August is still 8 percent below the peak in January. While the forecast of the firms expects production to increase in September by 6 percent, past records show that these forecasts tend to be too optimistic. 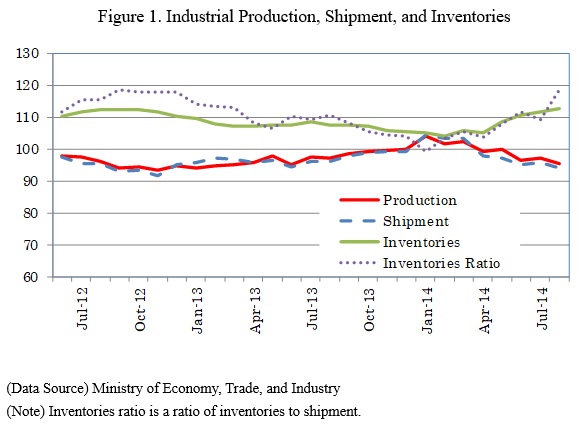 The optimistic forecast that was denied by the actual outcome can also be confirmed by the Tankan survey published by the Bank of Japan on October 1st. Diffusion Index on Business Conditions shows that the forecast made in June about what it will be in September turned out to be too optimistic when it actually reached September: it is the case in almost all categories of industries, including the most closely-watched large manufacturing enterprises (DI of 13 against expectation of 15).

The cost of the optimistic forecasts is seen in building up of inventories. As Fig.1 also shows, since recording a trough this February, inventories are on an upward trend. The current level of inventories (and its ratio to shipment) has risen to a level that is almost equivalent to that in the latter half of 2012, when the economy was last in recession. Unless there is a spectacular recovery in shipment in the immediate future, industrial production is destined to enter an adjustment phase in an effort to bring down the level of inventories to a more normal level.

Bad weather being a factor

Why was the optimistic forecast made by the firms turned out to be denied?

The negative impact of the bad weather can be witnessed in the decline in Business Condition DI in the Business Watchers Survey. After a big drop in April, the DI continued to improve until its drop in August. The drop in August was more significant in the western part of Japan (Chugoku, Shikoku, Kyushu, and Okinawa area) compared to others.

Decline in real wage income is more of a concern

If the reason of the poor performance is due to bad weather, we can assume that it will gradually fade out as the weather returns to normal. However, there is another possible reason for the poor performance that may prove to be long-living. That is the fall in real wage income that has become apparent after the consumer tax rate hike. 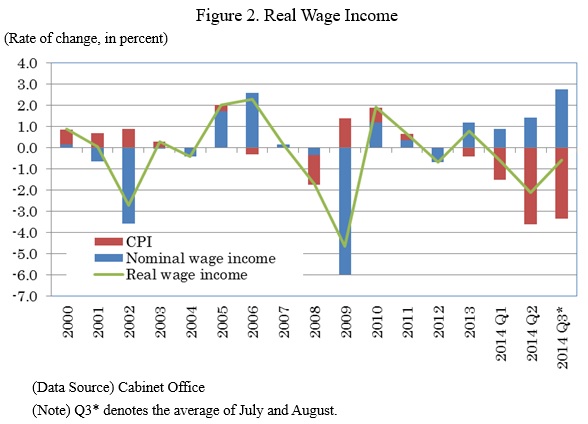 Meanwhile, the rate of change of CPI has turned positive and risen to more than 3 percent after April, including the impact of consumption tax rate hike. Since nominal wage income has increased only by a lower rate, wage income in real terms has shown a decline since the first quarter of 2014.

Negative impact of the depreciation of the yen

The reason why CPI increased at a higher rate than nominal wage income lies in the fact that large part of the increase in CPI has been due to the depreciation of the yen rather than the stronger aggregate demand relative to aggregate supply (or the narrowing of the negative GDP gap). If the latter was the main reason, it could be expected that it would also put pressure to wage income so that real wage income would show a positive growth. However, it the former has made a significant contribution, it would have a negative impact on nominal wage income as deterioration of terms of trade tend to have.

If the decline in real wage income was the main factor behind the poor macroeconomic performance, it could be expected to continue for some more months to come.

First, depreciation of yen that has taken place in the recent weeks could provide additional downward pressure on real wage income.

Second, if the improvement in corporate profit that is brought about by the depreciation of the yen lead to increase in employment and /or wage, it could offset the negative terms of trade effect. However, there is a possibility that improvement in profits only leads to increase in retained income. Even if wages do increase, it may take place not immediately but only in the form of increase in base wage or bonuses that takes place next year.

Third, if the positive impact of the depreciation of the yen is absent, there are signs that corporate profit this year, although high in term of its level, would be less than that in FY2013. This would reduce the possibility of growth in nominal wage income.

If these worries do actual realize, the poor performance may be with us for a longer period (it may be the case that, when we look back at some point of time in the future, we were already in a recessionary phase).