CPI is on the rise

Consumer price index (CPI) in Japan has shown a positive rate of increase on year-on-year basis since October 2016 (Figure 1). While still very low, especially when compared to the two percent inflation target set by the Bank of Japan, the steady rise in aggregate prices is gradually building up expectations that the Government might declare that Japan has finally overcome deflation (hereafter, de-deflation).

We start with defining what “de-deflation” means. And, in order to define de-deflation, we need to confirm what “deflation” means. Deflation is a sustained decline in aggregate prices. A temporary decline in aggregate prices, because of e.g. oil price fall, is not a deflation. Neither is a sustained decline in the price of a specific goods or service, e.g. of personal computers.

Indicators of a sustained increase in aggregate prices

How can we know that an increase in aggregate prices is a sustained one? There are a number of ways to confirm it.

First is looking at the GDP deflator.

A way to confirm whether the prices are increasing on a sustained basis due to domestic pressures is to see the developments in GDP deflator. Since GDP deflator is an indicator of how value added per unit of production is doing, it can be considered as an indicator of “home-made inflation.”

Second is looking at the output gap, or the GDP gap.

Figure 2 shows that GDP gap has become positive since the second quarter of 2017. It should provide, after some time-lag, positive pressures to GDP deflator to rise on a sustained basis.

Figure 2 shows that ULC has been increasing since 2014, but losing momentum in the recent quarters. The claim that wage increase is not sufficient in order to achieve price increase may be confirmed from this aspect.

In fact, the four indicators that we have seen, i.e. CPI, GDP deflator, GDP gap, and ULC, are what the Government pays attention to when judging whether the economy is in a deflation or not. As we have already seen, the evidence so far is still limited to justify the judgement that the Japanese economy has overcome deflation.

Why is inflation target set at two percent?

We have seen that evidences are still very limited to judge that deflation is over. But suppose the time has come that it could be justify, could it take place separately from the achievement of the two percent inflation target? Could there be a time-lag between the two?

Inflation target of two percent is considered to be appropriate from, at least, following two reasons.

First, it takes into account the upward bias that Laspeyres-type CPI index has. Even if the CPI shows a positive increase, the “true” inflation rate could still be negative. Usually, stable true price is considered to correspond to a CPI inflation rate of around a half to one percent.

(In addition to the above, economics of disinflation argues that some positive inflation rate is necessary in order to achieve real adjustments in face of nominal rigidity. I don’t think this type of argument is behind the two percent inflation target, so I will not touch upon this argument here.)

Developments in aggregate prices as seen from the inflation targeting-side

Let us assess the current situation from the inflation targeting-side as well. The situation can be judged to be very similar to what we have seen from de-deflation-side.

Although the headline CPI has been showing positive increase in the recent months, headline CPI is subject to many temporary factors. Therefore, we need to grasp the underlying trend of CPI changes. There is a number of alternative CPI indices that have been developed to serve that purpose.

First is the CPI excluding fresh food, or “BOJ’s core CPI.” While it removes short-term fluctuation factor due to weather, there still remains many volatile factors, most notably the fluctuations of oil prices. It is still not appropriate for us to judge the trend of aggregate prices.

Second is the CPI excluding fresh food and energy, or “BOJ’s core core CPI.” In addition to weather factors, it also removes external factors such as oil prices. It is a more appropriate indicator for us to judge the underlying trend.

Third is the CPI excluding food (other than alcoholic beverages) and energy, or “Stat’s core core CPI”. It further removes from the BOJ’s core core CPI other agricultural products that are subject to external factors. While it may seem to be more appropriate in terms of judging the underlying trend, there is a possibility of removing too much: the weight of this index is 6713 out of 10000, while CPI excluding fresh food and CPI excluding fresh food and energy still have weights of 9586 and 8882, respectively.

Fourth is the chain CPI index. Since CPI is an index calculated on the basis of Laspeyres formula, it is subject to upward bias. As a result, there is a risk of overestimating the inflationary pressure as well as a risk of being overturned when the base-year revision of the CPI index takes place. Therefore, it is important to look at the chain index version of the CPI, which is considered to have only a relatively limited bias.

According to Figure 3, there are difference between the headline CPI and other CPI indices. Whether headline CPI is higher than the others depends on the period. However, at least in the most recent months, it shows that headline CPI is higher than the others except for BOJ’s core CPI. In particular, BOJ’s and Stat’s core core CPIs are both lower, close to zero. It shows that considerable effort is still needed before the two percent target to be achieved. 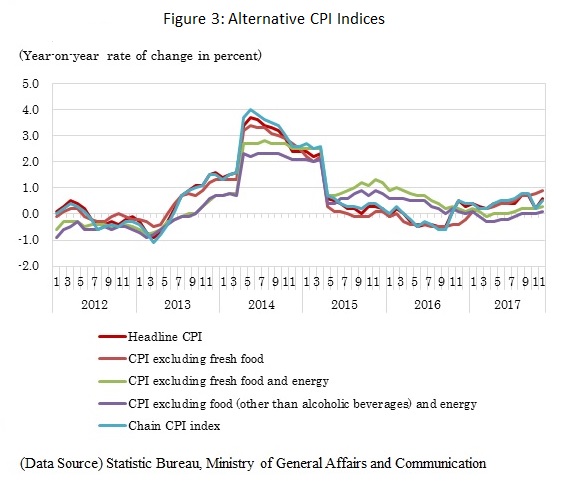 Coordination between the Government and the Bank of Japan required

The discussion above leads us to the conclusion that the government, who is trying to judge whether deflation is over, and the Bank of Japan, who is trying to see whether two percent inflation target will be achieved, is basically aiming for the same state of aggregate prices but from different angles. Therefore, it is natural to think that there won’t be a time-lag between the achievements of the two objectives.

Moreover, there shouldn’t be a time-lag either. Because separate decisions with a time-lag between the two only invite confusion: confusion that the views of the Government and the Bank of Japan are different in their view about the state of aggregate prices.

If such confusion is to be avoided, the government and the Bank of Japan needs to coordinate in their judgement of de-deflation and achievement of two percent inflation target.