Central banks have moved to deal with the signs of inflation

In contrast, Bank of Japan only made a minor change to its monetary policy in December; extending the implementation of part of the Special Program to Support Financing in Response to COVID-19 by six months while completing the additional purchase of CP and corporate bonds at the end of March 2022 as scheduled. The basic monetary policy stance, including the yield curve control, was maintained.

Monetary policies that showed convergence in face of the challenges posed by the COVID-19 towards the direction of zero interest rate and quantitative easing have now started to diverge. The reason for the divergence is in the different situation that different countries are in with regards their inflationary prospects. More specifically, while many countries are facing a heightened risk of inflation, Japan is still fighting deflation.

Deflation is yet to be overcome

The recent situation in Japan with regards consumer prices (excluding the impact of consumption tax changes) can be seen in Figure 1. 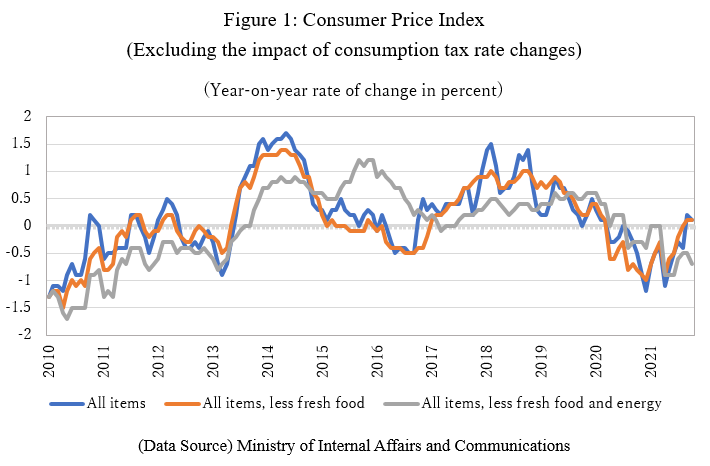 As it shows, even the year-on-year rate of change of CPI (excluding fresh food) is only 0.1 percent in October 2021. If we remove the impact of energy, CPI (excluding fresh food and energy) is still -0.7 percent. While there has been some progress made in mid-2010s, inflation rate turned negative in 2020 and has not basically recovered since then. It shows that Japan still has not overcome deflation.

Producer prices have increased because of increase in import prices

It does not mean that Japan was not affected by the increase in prices of oil and other primary goods. The impact is apparent in the producer price index that is shown in Figure 2. 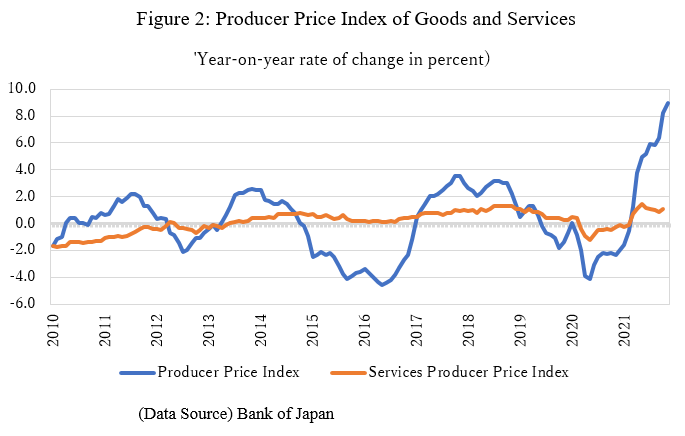 After the trough in May 2020, producer price index rapidly started to increase. In November 2021, the year-on-year rate of change was 9.0 percent, the highest increase since December 1980.

The rise in producer price index is a result of a rise in import prices. As Figure 3 shows, import price index has been showing an increase since reaching a trough in May 2020. 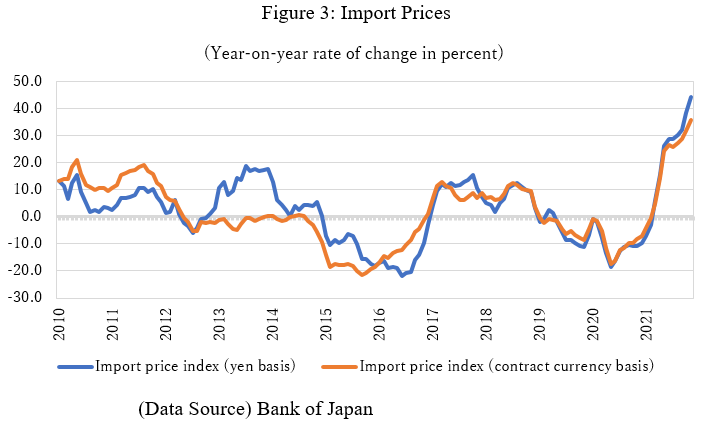 As a result, import prices in contract currency basis in November 2021 is 35.7 percent higher than the price at the same month previous year. In addition, depreciation of the yen in the recent months has added more than 8 percentage points to the rate of change: year-on-year rate of increase of import price in yen basis has reached 44.3 percent in November 2021.

Falling consumer price in face of an increase in import prices means that the terms of trade for the firms are worsening. It is reflected in the result of the Bank of Japan’s Tankan (Short-Term Economic Survey of Enterprises in Japan). Figure 4 shows that, since the third quarter of 2020, D.I for changes in input prices is rising faster than the D.I. for changes in output prices. It reflects the difficulty that firms find in passing the increase in input prices on to output prices. It implies that their profits are been squeezed. 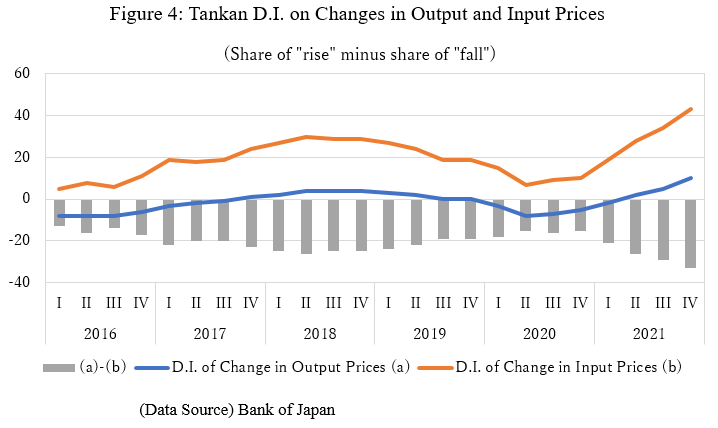 The reason for the sustained fall in consumer prices is the weak aggregate demand relative to the aggregate production capacity. As Figure 5 shows, the gap between real GDP and potential GDP, or GDP gap, is still significantly negative. It means that there is still a strong downward pressure on prices. 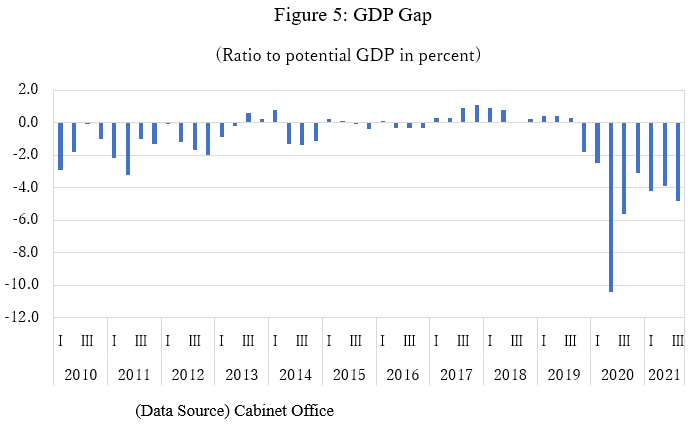 Delay in recovery means a greater burden to bear

However, these developments would be a great burden on the economy in countries like Japan where it is lagging behind others in terms of the pace of recovery. Squeeze of the profits will make the situation worse for the corporate sector which should perform as the main engine to pull the economy out from the current situation.

In this kind of a situation, any change in monetary policy towards normalization cannot be expected to take place in the near future. If further stimulus is required, there is a high possibility that further action by the fiscal policy will be called for.

Economic policies in Japan is expected to face further challenges in 2022.

(I have made a similar argument in relation to the meaning of GDP deflator in May 2021. Please see An Implication of an Unsynchronized Global Recovery under COVID-19)