Deregulation of the Energy Sector : Its Achievements and the Remaining Agenda

Of the three arrows of Abenomics, the third arrow has often been accused of been slow in showing progress. However, one apparent exception would be the deregulation of the energy sector. Following the full liberalization of electricity retail market in April 2016, full liberalization of the city gas retail market has become effective in April 2017. In the two retail markets, consumers can now freely choose their energy provider which offers different rates for their products.

Relative high cost of energy has long been a problem in Japan. In order to address the problem, deregulation of the energy sectors started in the mid-1990s.

Until then, both the electricity and city gas was provided by companies which enjoyed regional monopoly. National market of electricity was divided into ten regions where there was only a single supplier in each of the regions (e.g. TEPCO for the Kanto region). The national market of city gas was divided into much smaller regions, each also dominated by a monopoly supplier. Among them, four large suppliers stood out (e.g. Tokyo Gas for the Kanto region).

Regional monopoly was given to the suppliers because the energy industry was considered to have the features of natural monopoly. In order to secure stable supply of energy at reasonable rates to the customers, the government allowed regional monopoly in exchange for government regulation on rate setting: the energy suppliers had to submit requests to, and get the approval of, the government before being able to change their rates. The government required that the rates be calculated on the basis of full cost principle (i.e. estimated efficient cost plus appropriate profit).

Deregulation of the energy sector has been gradually introduced since mid-1990s in both regional monopoly and rate setting area. It took place in both of the electricity and city gas industries.

In 1995, the electricity wholesale generation was liberalized to allow non-original electricity companies to generate electricity and sell them to electricity companies. Also, non-original electricity companies with its own generation and distribution system were allowed to sell electricity in the retail market. With regards rate setting, in order to provide incentive to be efficient, rates became subject to horizontal comparison of costs across the companies in the industry (i.e. yardstick competition). As an exception to government regulation on rate changes, automatic fuel cost adjustment system was introduced to allow full pass-through of changes in fuel cost to rates. City gas industry underwent a similar deregulation in 1995 when non-original city gas companies were allowed to supply gas to customers who purchased large volume of gas (those purchasing more than 2 million cubic meters per year). Yardstick competition and fuel cost adjustment system were also introduced to the industry.

In 1999, the electricity retail market was partially liberalized when non-original electricity companies were allowed to generate and sell electricity to super high-voltage customers (those receiving electricity at more than 20,000V and have contracts for more than 2000kW) at rates freely set among the parties concerned. Since these new market entrants required access to transmission and distribution system owned by the original electricity companies, rules for wheeling service (which allows access to and to make use of the system) were formulated. In the regulated area, rate setting was partially relaxed by allowing rate cuts (but not rate increases) to come into effect without government approval. The city gas retail market was further liberalized (expanded to cover customers purchasing more than 1 million cubic meters a year), rules for the wheeling service were also formulated, and procedure for rate reduction was relaxed.

Electricity retail market underwent further liberalization in 2004 and 2005 when non-original electricity companies were allowed to supply to high voltage customers with contracts of more than 500kW and 50kW, respectively, at prices freely set by the parties concerned. City gas market followed suit when retail deregulation was further expanded to cover customers covering more than 0.5 million cubic meters a year in 2004. In addition, threshold of the liberalization of the retail city gas market was further reduced to 0.1 million cubic meters a year in 2007.

Impact of the full liberalization of the retail energy market

The full liberalization of the retail energy market that took place in 2016, for electricity, and 2017, for city gas, was the final step in the deregulation process. While the impact of the liberalization is still to be seen, particularly with regards the city gas retail market which only started this April and some main competitors are still yet to enter the market (e.g. TEPCO is expected to enter the business in July), some partial information in the electric retail market is available. 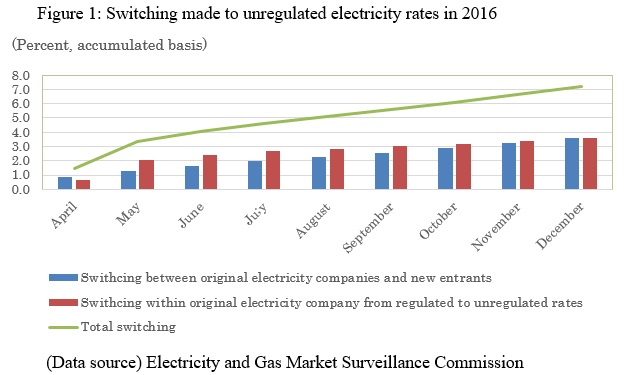 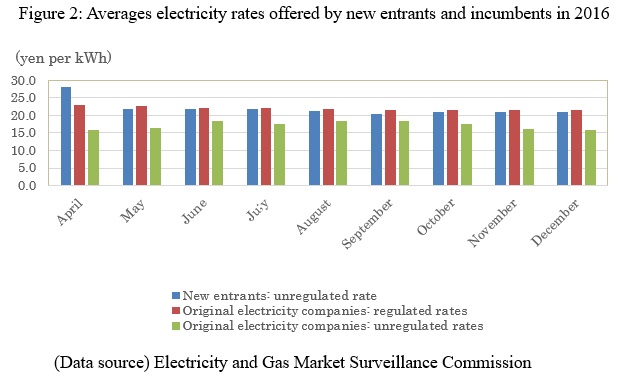 The limited information above shows that the impact is only slowly evolving. We seem to require more time before being able to make more firm assessment of the full liberalization.

While the retail energy market is fully liberalized, there is still a large portion of the energy sector that is still subject to regulation. That is the transmission and distribution system of the electricity and city gas industry (e.g. the electricity cables and gas tubes) owned by the original electricity companies. Since they are considered to be essential facilities (or bottleneck facilities) of the industry, they are given regional monopoly. However, in view of the need for the new entrants to be able to access the transmission and distribution system at fair rates, incumbents are obliged to accept the request of the new entrant to access the system, and the access charges need to be approved by the government. Full cost principle is applied to the access charges when the government examines the requests.

Separation of the transmission and distribution system from the rest to become independent companies is expected to take place in 2020, in the electricity industry, and in 2022, in the city gas industry. It would help in securing fair access to the system by new entrants and original companies alike, and in improving the transparency of the cost of the system. However, it would not eliminate the more difficult problem that full cost principle has: It provides only a limited incentive to the owners of the essential facilities to be efficient. Further innovation needs to be made in that respect.

The mission to achieve an efficient energy sector is yet to be accomplished.