The Japan Center for Economic Research has recently developed the JCER Financial Stress Index as an indicator of the rise in financial "systemic risk" and has started to publish the latest figures. This index is a useful indicator for detecting a recurrence of financial crisis, such as the financial instability in the late 1990s and the 2008 Lehman Shock. The index has soared recently, reflecting the turmoil in financial markets due to the pandemic of the novel coronavirus, and equivalent to the eve of the 2008 global financial crisis.
Financial "systemic risk" refers to the risk that the financial system as a whole will malfunction due to some trigger event, such as the current corona crisis or the failure of a financial institution, which will have a serious adverse effect on the real economy. The JCER Financial Stress Index, based on the “Composite Indicator of Systemic Stress” developed by European Central Bank (ECB), is constructed by compositing fifteen individual financial market indicators, including stock price and its volatility, bond yields, and exchange rate changes (refer to Table A1 below). Quantitatively understanding which markets are responsible for the increased financial stress enables us to provide guidance to policy implementation by fiscal and monetary authorities.

Recent developments of the JCER Financial Stress Index
Financial stress has risen during the financial system instability of 1997-98 and the Global Financial Crisis (GFC) of 2007-08. As for recent years, the stress level rose in 2016, when major events including the slowdown of emerging economies such as China, the introduction of the BOJ’s negative interest rate policy, and the withdrawal of the United Kingdom from the EU (Brexit) overlapped (Figure below).
It has risen recently, reflecting the spike of volatility in the financial markets caused by the Corona Crisis, with the latest financial stress index of 0.291 as of April 10, 2020. This is equivalent to the level of the “Eve of the GFC" which corresponds to the period from the Paribas shock in August 2007 and the bailout of Bear Stearns in March 2008 to the Lehman shock.

The Japan Center for Economic Research set a general rule to update the index about once a week. When significant fluctuations in the financial markets occur, we are to update and publish the index temporarily using daily data. 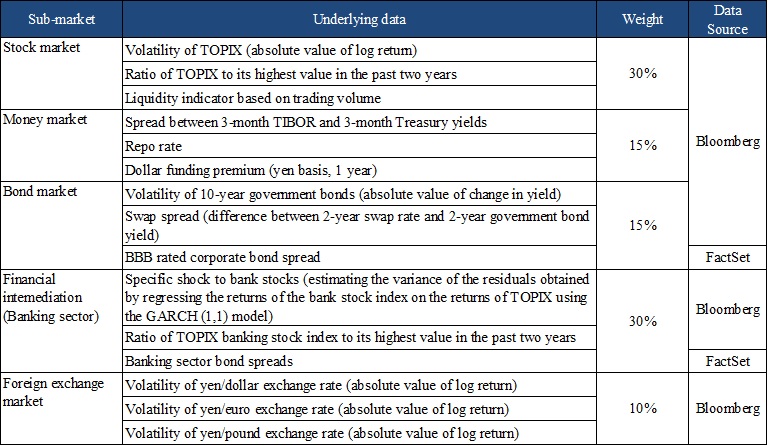 － Slowing U.S. inflation has led to market expectations that the FED will gear down the pace of interest rate hikes
－ TOPIX is at its highest level in about 10 months, and financial stress remains a low level

－ While central banks in the US and Europe continue to raise interest rate aggressively, BOJ maintains massive easing
－ Japanese government and BOJ intervened to buy the yen for the first time in about 24 years, financial stress keeps a low level

－ The Fed maintains its stance of controlling inflation at the expense of the economy
－ While the yen weakens again, financial stress remains low level

－ The BOJ has decided to continue massive easing program
－ The yen strengthened against the dollar due to caution about the US economy, financial stress remains a low level