The United States is known for its economic policy principles based on a laissez-faire approach, trusting that free market leads to best outcome of the people, and is often described as having a “small government”. In contrast, Sweden is famous for being a welfare state, implementing wide range of social policies to improve the well-being of the people, and is considered to be a leader of a “big government”. Then, how about Japan? Is she more like the US or like Sweden? Does Japan have a “small government” or a “big government”?

An obvious starting point to answer this question is to look at the size of the government in terms of government expenditure. 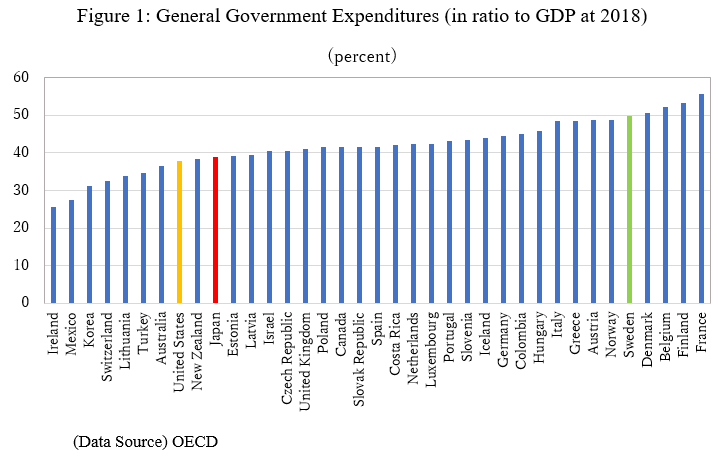 Government’s size may not be an appropriate indicator

However, can we really say that Japan has a “small government”?

Figure 1 compares a wide range of countries which differ in living-standards and in population. If the demand for government service differs among the countries with these differences, general government expenditures may be different only because of these factors and not because of the differences in economic policy principles as we implicitly assume to be the case.

In order to take these factors into account, Figure 2 shows the correlation between per capita GDP and per capita general government expenditures. 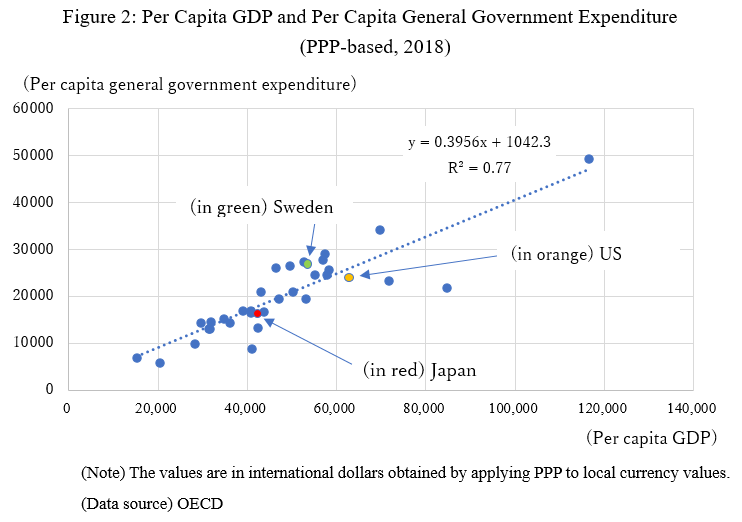 It shows that there is a positive correlation between the two, implying that as economies develop and living-standards rise, people seem to demand for more intensive government services. Moreover, if there is a kind of a fixed cost in establishing a government and a variable cost that reflects the difference in per capita GDP, it can be said that the ratio of general government expenditures to GDP (whic corresponds to the slope of the line connecting the origin and a point of the country) would gradually fall as per capita income increases. If that is the case, decline in the ratio does not necessary reflect the difference in economic policy principles (i.e. laissez-faire vs. welfare state).

Of course, if you look at the figure more closely, US and Japan lie below the regression line while Sweden lies above. Also, Sweden has a higher per capita GDP than Japan, but has a higher ratio of general government expenditure to GDP as we saw in Figure 1. It suggests that Sweden spends more than Japan even after controlling for per capita GDP. They can be seen as evidence that Sweden has a “big government”.

Nevertheless, there do seem to be a need to complement the above observation with other information. Is there any other information that would tell us the difference of countries in terms of economic policy principles? In the following, three alternative sources of information will be suggested: breakdown of government expenditure by functions, indicator of product market regulation, and degree of income redistribution by taxes and transfers.

Breakdown of government spending by functions

Figure 3 shows the percentage shares of general government expenditure spent for those functions in the three countries, US, Sweden, and Japan. 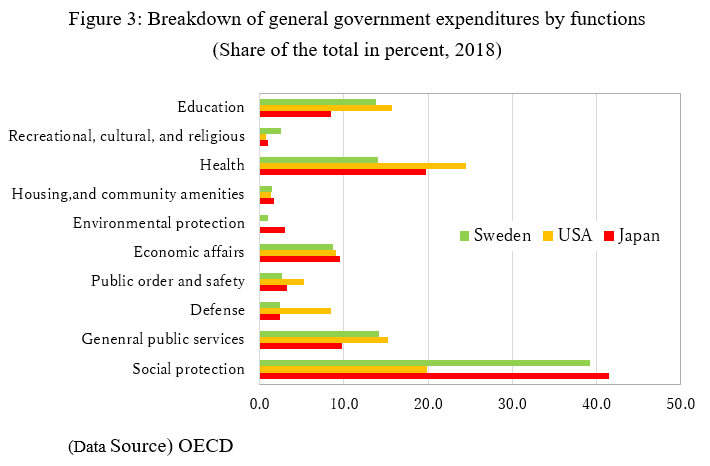 As for Japan, it is noteworthy to mention that the share of government expenditure spent for social protection is more than Sweden. On the other hand, what is striking is the fact that Japan spends the least for education among the tree countries. It seems to support the claim that Japan is a country that spends a significant amount for the aged but not so for the young. It shows that Japan is not a full-spec welfare state as Sweden.

Second is comparing the degree of intervention to the economic activities by the government. To see that, Figure 4 shows the product market regulation (PMR) overall indicator provided by the OECD. According to the indicator, US has the most regulated market among the three countries. In contrast, Sweden has the least regulation on economic activities. It is just the opposite of the image we have about the US and Sweden. As for Japan, she falls right in between the two countries. 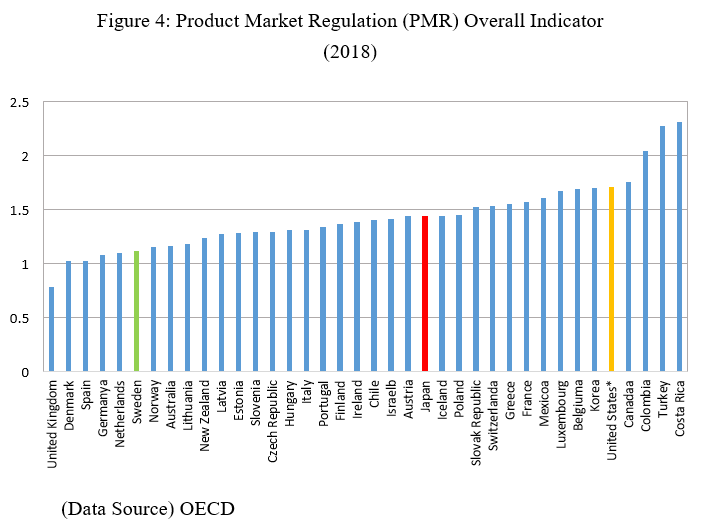 The reason for US having a high PMR overall indicator can be explained by the barriers to domestic and foreign entry. With regards the former, there seems to be a significant administrative burden on the start-ups in terms of licenses and permits. With regards the barrier against foreign entry, treatment of foreign suppliers seems to be the problem. It should be noted that the problems regarding start-ups in US have also been mentioned in the World Bank’s Ease of Doing ranking: In 2019, US was the 6th among the 190 countries in the overall ranking, but the ranking in terms of “starting business” was the 55th.

It shows that there is an involvement in business by the government and is creating some problems in the functioning of the free market in US. The idea of US having a laissez-faire regime may need to be modified.

However, just looking at the difference may be misleading because countries with limited market income inequality do not have the incentive to redistribute much. It means that we need to judge the magnitude of the redistribution done by the government, taking into account the inequality that existed before redistribution.

In view of this, Figure 5 shows the relationship between the Gini-coefficients of market income and those for disposable income in the OECD countries. If there is no redistribution made, the points should be on the 45 degrees line. Since the point in the figure are all more or less below the line, it shows that income redistribution has been made in all of the OECD countries. 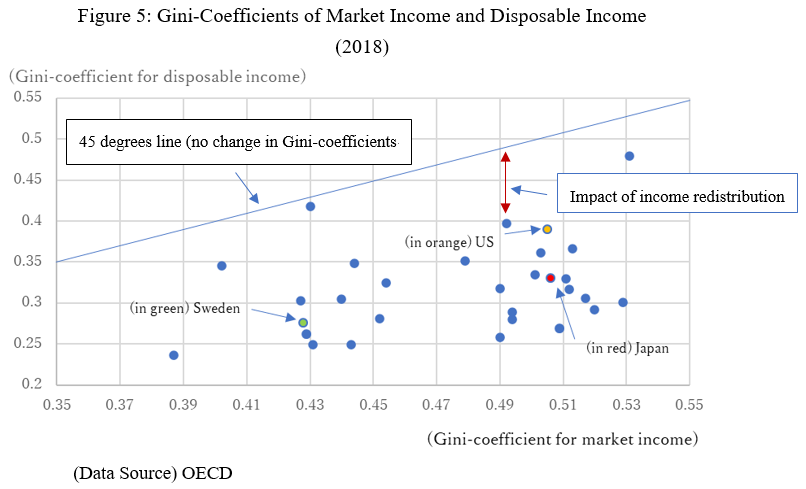 In the case of US, market income inequality was something similar to Japan’s. However, redistribution made by taxes and transfers were limited so that disposable income inequality ended up being much higher than that of Japan.

Above observation leads us to conclude that redistribution function is the greatest in Sweden and smallest in US, and somewhat in between lies Japan. It is consistent with the view that Sweden, as a welfare state, is more concerned with equality issues compared to US and Japan.

By making use of three measures, the countries’ characteristics become clearer. US has, in many cases, a “small government” feature but sometimes she is found not to. Sweden’s case was the opposite, having a “large government feature” but sometimes not. As for Japan, we find that, in some aspect, Japan has a lot in common with the US. In that sense, Japan is a “small government”. But in other aspects, Japan is more like Sweden and has a “big government” feature.

The discussion shows that we need to specify from which aspect we want to make the assessment and to look into the details from that particular aspect. Relying on a single indicator and simplifying the situation may only lead to a confusion.