2020 Tokyo Olympic and Paralympic Games (hereafter 2020 Tokyo Olympics) is drawing near. Expectations are gradually mounting, and preparations are steadily on their way. The construction of the new national stadium is taking shape, and redevelopment projects in Tokyo are making progress. When the time comes and athletes start to compete in the games during the one and a half months period, necessary outlays will be spent to make that happen.

(Note) The discussion that follows is based on my contribution to the 2017 TCS Economic Report published by the Trilateral Cooperation Secretariat (TCS), an international organization which has been established to promote peace and common prosperity among China, Japan, and South Korea. The 2017 TCS Economic Report takes up Olympics as the special theme and appointed economists from the three countries to contribute to the Report. For details please see the Report on the TCS’s website.

Direct and indirect costs of the 2020 Tokyo Olympics

The expenditures related to the 2020 Tokyo Olympics are as shown in Figure 1: 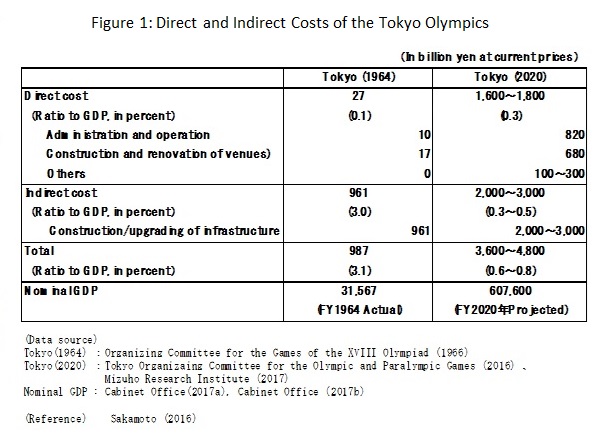 Administration and operation of the Games will require around 820 billion yen. Construction and renovation of the venues is expected to cost around 680 billion yen. To prepare for the unexpected, further 100~300 billion yen is set aside (Tokyo Organizing Committee for the Olympic and Paralympic Games, 2016). These costs constitute the direct costs of the Olympics.

In addition, investments to construct and upgrade infrastructure is expected to take place. It includes renewals and repairs of the Metropolitan Expressway, the construction of new and extension of existing railway lines, and expansion of Narita and Haneda Airports. These indirect costs are expected to total 2~3 trillion yen (Mizuho, 2017).

Of course, it should be noted that these costs are current estimates. Past experiences tell us that actual costs tend to be significantly higher than prior estimates.

Furthermore, additional investments may also be made by the private sector. For instance, there are estimates that investments for hotel construction and renovation could be around 0.8 trillion yen, and those for urban renewal to be around 5~6 trillion yen (Bank of Japan 2017). Inbound foreign tourist, which are already showing rapid growth increase, could further increase in terms of the number and the spending per person.

The total expenditure induced by the 2020 Tokyo Olympics, while it may seem to be large, is still lower in terms of its ratio to GDP than that in 1964 Tokyo Olympics, as Figure 1 shows.

The grand total of the costs for 1964 Tokyo Olympics was 987 billion yen. In terms of ratio to GDP, it was 3.1 percent, significantly larger than the 0.6~0.8 percent estimated for 2020 Tokyo Olympics.

Nevertheless, the total cost for 1964 Tokyo Olympics was higher than the current estimate for 2020 Tokyo Olympics because of the large indirect cost spent on infrastructures. The ratio of indirect cost to GDP was significantly higher in 1964 than that expected for 2020.

1964 Tokyo Olympics also witnessed additional investment by the private sector. It was around this time that number of world-class hotels started their business in Tokyo. If these were further taken into account, private investment induced by the Olympics should also have been large.

n fact, Figure 2 shows that fixed capital formation surged, not only in public sector but also in private sector since late 1950 (hosting of Olympics in Tokyo was decided by the International Olympic Committee in 1959). It should be noted that there is not much difference in private investment between Tokyo and the rest of Japan: It is probably due to the fact that Japan at this time was in the High-Growth period so that incentive for private investment was strong in regions other than Tokyo as well. 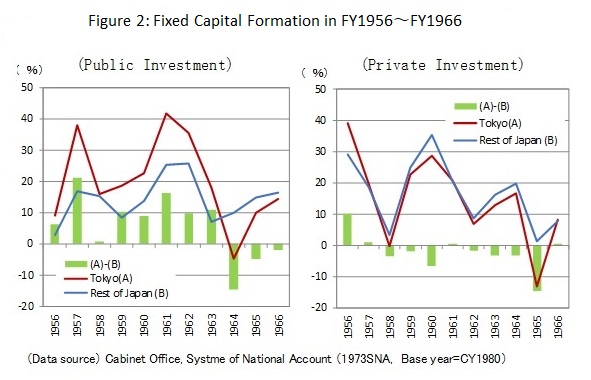 We have seen that estimated expenditures related to the Tokyo Olympics is smaller in the case of 2020 compared to that of 1964. If the multipliers are the same, it suggests that the total economic impact of the Olympics-related expenditures would be smaller for 2020 compared to 1964. However, the multipliers may not be the same. That is because economic policy settings are quite different between the two periods.

1964 Olympics took place during the High-Growth period (mid 1950s~early 1970s). More specifically, it was during the first half of the period when private investment was the main driver of growth. The Annual Report on Economic Situation by the government at that time characterized the situation as that where “high investment called for more investment.” It may seem that Olympics-related expenditure further added fuel to the high growth at that time.

When economic activity picked up during the period, imports surged. However, the pressure to depreciate the exchange rate due to the increase in import payments had to be offset by the authorities in order to maintain the fixed exchange rate of 360 yen to a US dollar. It was made possible by selling foreign exchange to the market. The result of the intervention was a near exhaustion of the foreign reserves. To avoid the depletion of the foreign reserves, the authorities had to rely on monetary policy tightening to cool down the economy and to slow down imports. This situation came up frequently during the first-half of the High-Growth period. This is the constraint on growth that was called the “ceiling posed by balance of payments” at the time.

Since this was the situation, it is difficult to assume that additional expenditures due to the Olympics had an effect of adding further stimulus to the economy which was already growing by strong investment. It seems more probable that, under the constraint coming from the low foreign reserves, extra expenditure just crowded-out other expenditures.

In comparison, economic policies in 2020 should be more accommodative.

Of course, we are now in a flexible exchange-rate regime. Under the regime, additional stimulus coming from Olympics-related expenditure should provide an upward pressure on interest rates, and pressure on the exchange rate to appreciate. Appreciation should negatively affect net exports and offset the additional stimulus. Such a Mundell-Fleming effect would negate any positive economic impact coming from the Olympics-related expenditures.

However, the current situation is accompanied by monetary easing. More specifically, the Bank of Japan is implementing Quantitative and Qualitative Monetary Easing with Yield Curve Control (QQE with YCC), currently aiming for a zero percent ten-year yield. This monetary policy framework is promised to be in place until CPI inflation rate reaches 2 percent (the “Overshooting Commitment”). Judging from the development in aggregate prices so far, it is most probable that the policy framework will still be in place in 2020.

If that is the case, any upward pressure on interest rates will be kept in check by the QQE-YCC so that the resulting appreciation of the exchange rate and decline in net exports will be avoided. It implies that, under such a policy mix, Olympics-related expenditures will be able to show their positive multiplier effects.

What should be the legacy of the 2020 Tokyo Olympics

The above discussion leads us to believe that we can expect a reasonable positive economic impact from the expenditures related to the 2020 Tokyo Olympics.

However, a caveat is warranted. I should mention that we have confined our discussion to the economic impact of the expenditures that will be made before and during the Olympic Games.

The expenditures will be made only until the Olympics. When the Olympics closes there is a risk that economic activity drops. We have often heard that countries that hosted Olympics have fallen into recession after the Games. 1964 Tokyo Olympics was no exception: the peak of the boom was in October 1964, the month when the Olympics was held, and entered the “Showa 40 Recession,” also known as the “structural recession,” thereafter. The drop in public and private investment can be confirmed by Figure 2. (I discussed the significance of the recession in one of the previous columns. Please see http://www.jcer.or.jp/column/saito/index594.html).

In order to avoid such a recession, Japan needs to create an economy which is resilient enough to survive the drop of Olympics-related expenditures. We often hear discussions about the importance of “legacy” of the Olympic Games. It often tends to focus on how we can avoid the venues that has been prepared for the Olympics from being idle after the Games. From macroeconomic point-of-view, what seems to be more important is how we can create a strong basis for the aggregate demand that can be sustained even after the Tokyo Olympics in 2020.

Cabinet Office. Chu-Choki No Keizai Zaisei Ni Kansuru Shisan (Medium- and Long-Term Projections of the Economy and Public Finance),” (2017a) (in Japanese).