Trade-off between human and economic losses

Number of confirmed infection cases of COVID-19 is increasing again in Japan.

The number saw its minimum of 20 in May 25, which was the day when the state of emergency was withdrawn. Since then, the number increased to reach the recent maximum of 1595, in August 7; more than double the number of 708 reached at the previous peak in April 10, around the time state of emergency was declared. It is often mentioned that the number of the seriously infected and the fatalities are low, but even they are also showing signs of an increase. There is no room for complacency at this point.

That is why, there are discussions as to whether the policy responses by the central and local governments are appropriate, whether state of emergency needs to be declared again, and whether the ongoing “Go To Travel Campaign” (government subsidy program for travelers) should be cancelled.

The issue here is how we should strike a balance between the impact on health and lives of the people and the impact on economic activity. This month’s column tries to provide a framework to discuss the issue.

A framework to analyze counter-COVID-19 measures

The measures that are available at present to counter COVID-19 is basically measures to confine mobility of people at a different degree. Therefore, let us call measures that attempt to counter COVID-19 “mobility confinement measures”. The measures include soft measures such as asking citizens to wear masks, to avoid “three Cs” (closed spaces, crowded places, and close contact), and to request “voluntary restraint in going out and doing business” as well as hard measures such as “lockdown of cities and towns”.

The reason why mobility confinement measures are introduced is because of their ability to prevent health being seriously damaged and to save lives. If we call these impacts the “effects of reducing human losses”, we can say that mobility confinement measures have positive effects of reducing human losses. The relationship between the two is shown as a marginal benefit curve in Figure 1. 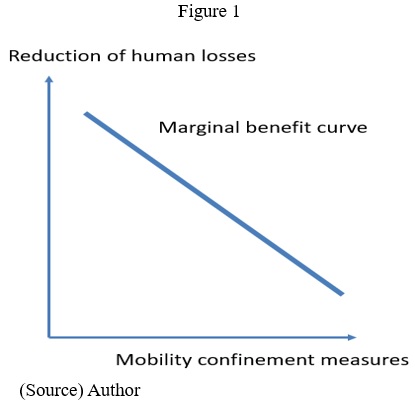 In figure 1, it is assumed that mobility confinement measures always have positive effects of reducing human losses, but the marginal effects gradually fall as the measures shifts from softer to harder ones.

The assumption depends heavily on the citizens’ reaction to mobility confinement measures and, in particular, the effectiveness of the soft measures. If citizens do not observe the soft requests by the government, the marginal benefit of those measures may not be so large. In the case of Japan, however, soft measures seem to have large effects: after the declaration of state of emergency, which is a soft measure introduced without imposing any punishment when breached, the increase in the confirmed cases quickly fell, as mentioned earlier. Therefore, Figure 1 can be regarded as reflecting the reality of countries like Japan.

On the other hand, when mobility confinement measures are introduced, it will have negative effects on the economy by, for example, reducing sales of business and incomes of individuals. If we call these negative effects the “effects of increasing economic losses”, the relationship between the two can be shown as the marginal cost curve in Figure 2. 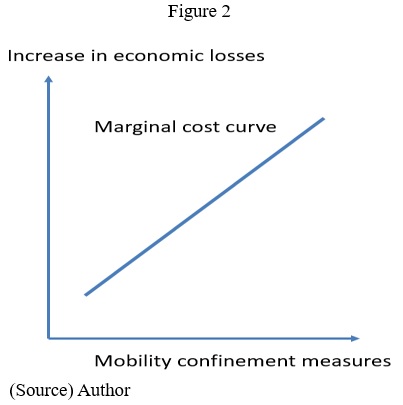 In figure 2, it is assumed that mobility confinement measures will always have negative effects of increasing economic losses, and the marginal effect will gradually increase as measures shift from softer to harder ones.

The assumption reflects the fact that softer the measures, there is more room for firms to keep open their businesses so that the negative impact on the economy is limited compared to the case where businesses are forced to close down.

How can we compare human and economic losses?

Since we have the two curves, we may think that we can combine the two to see the benefit and the cost of different mobility confinement measures and find out what the optimal policy for the government should be.

However, we need to make a big jump in order to do so. In order to combine the two curves, we have to convert either the “effects of reducing human losses” or the “effects of increasing economic losses” to the other so that we can compare which is larger or smaller. But how can we compare human losses and economic losses on a same dimension? This seems to be an unsolvable question. But it needs to be recognized that, when we are arguing about the trade-off between saving human lives and economic cost, this is what we are implicitly doing.

In figure 3, we have assumed that, somehow, we are able to convert one to the other so that the two curves can be drawn on one figure. 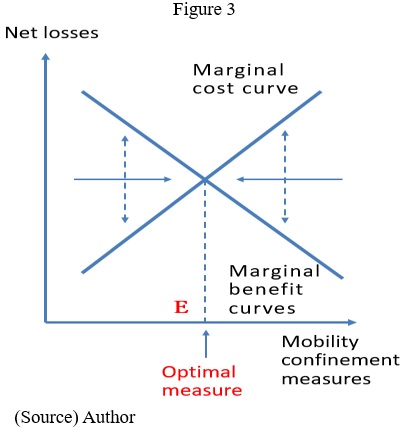 If the two curves can be combined as Figure 3, then the optimal mobility confinement measure that the government should introduce can be obtained by finding a point of intersection of the two curves, named E. That is because, if a measure is chosen somewhere to the left of E, net gain of taking harder measure is positive. If, to the contrary, a measure is chosen somewhere to the right of E, net loss can be reduced by taking a softer measure.

Analyzing the implications of the declaration of state of emergency

The above framework can be used to understand the situation Japan have gone through to date.

First, a state of emergency was declared in April. This action was taken as a result of the urgent need to give the highest priority to the reduction of human losses in view of the rapid increase in infection which might endanger the medical system by patients exceeding its capacity. This can be understood as choosing a point such as A in Figure 4 (1). 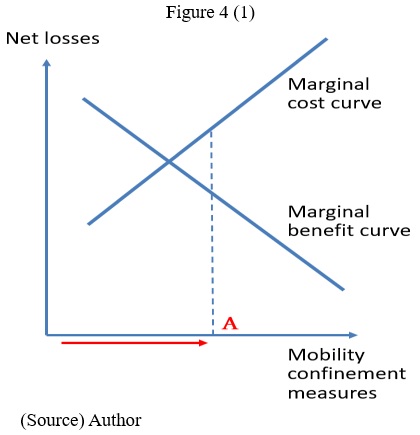 Figure 4 (1) shows that point A was not an optimal measure at that time. It was an emergency measure that did not consider much about the economic cost that it may imply. That is why strong argument for providing assistance to the economy quickly emerged.

The government’s response to these arguments was the introduction of two supplementary budgets that came into effect in April and June, respectively. They included transfer and subsidy programs that intended to strengthen the resilience of the society facing economic difficulties created by the state of emergency. In Figure 4 (2), this is shown as the downward shift in the marginal cost curve. Ideally, it should have made the state of emergency an optimal measure. 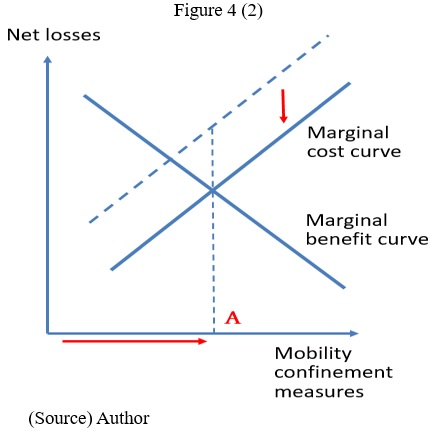 What needs to be noted here is that transfer and subsidy programs are all temporary programs. It means that, when the appropriated budgets (including the contingency funds) are exhausted, the programs have to seize, and the marginal cost curve would have to shift back to the original position. If that is to be avoided, the government needs to introduce another supplementary budget. Inevitably, it would further worsen the budget balance and increase the government debt that is already large.

Analyzing the implications of the withdrawal of state of emergency

Second, the state of emergency was withdrawn in May. The action was a result of declining trend of the number of confirmed infections, and the need to stop the deterioration of the economic situation. In Figure 5 (1), it is shown as the government choosing point B. 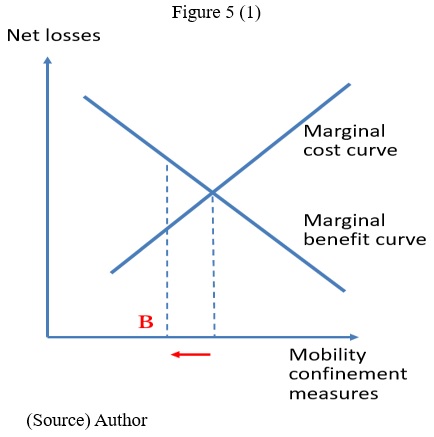 If this is the only change taking place, then, again, the situation would not be optimal. There is a large benefit in taking harder measures.

To make point B an optimal point, government called to the people to change their behavior, or to adjust to a “new normal”. “New normal” is a daily behavior of people that will reduce the possibility of being infected (in other words, reducing the effective reproduction number to less than one) absent of any vaccines or remedies. This was the only thing that that the government could do to shift the marginal benefit curve downwards, as is shown in Figure 5 (2). Ideally, it should have made the state of emergency an optimal measure. 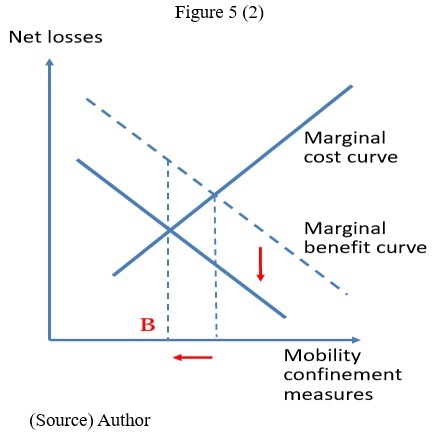 However, to sustain “new normal” kind of behavior is not easy. People can easily be fatigued in adopting new behavior and return to the old habit. That is why, in spite of the government request, number of confirmed cases is rising again. But when “new normal” is not sustained, marginal benefit curve shifts back, and the withdrawal become non-optimal. If no other changes take place, what it calls for is a shift to a harder mobility confinement measure.

Optimal choice requires sustained efforts by the government and the people

The above analysis shows that the current situation can only be optimal if the current fiscal support measures is maintained, and if the “new normal” is well established in the society. It is of utmost importance that these conditions are met so as to strike an ideal balance between human and economic losses. But meeting the two conditions require sustained efforts on the part of the government and the people.

What we are being tested is whether we can actually make such sustained efforts in order to overcome the threat caused by the COVID-19.