Equity, Growth, and the Size of the Government : Trilemma facing Japan

In last December’s column entitled “Widening of Inequality in Japan: Its Implications,” I discussed the special features of the widening of inequality in Japan and the direction of policies that they suggest. In this month’s column, I would like to develop the argument a little further.

Widening of Inequality in Japan

The main points of the discussion made in last December’s column (see Widening of Inequality in Japan : Its Implications(December 11, 2017)) can be summarized as follows.

“Inequality in Japan is widening. However, compared to the United States and major European economies, the increase in share of the top one percent income earners is limited, and inequality in the working generation has not widened significantly.

The reason behind this seems to lie in the fact that technological changes and globalization (inward globalization, in particular) in Japan have not taken place as much as in other developed economies.

If that is the case, it implies that Japan has chosen to cap the widening of inequality by sacrificing the growth opportunities that technological changes and globalization may have provided.

In face of the aging and shrinking of the population that Japan faces and its need to grow, it seems inappropriate and impossible to maintain the current set of policies. In order to enhance the growth potential, technological change and globalization have to be pursued and accelerated. However, it raises the concern that inequality may widen in exchange.

In order to overcome such a trade-off, opportunities for accumulating human capital regardless of age through enhancing education and training need to provided, and institutional arrangements to match labor demand and supply need to be improved.”

I would like to develop the above argument and shed new light on it from the point of view of a trilemma between equity, growth, and the size of the government.

Trilemma between equity, growth, and the size of the government

When I say a trilemma between equity, growth, and the size of the government, I have in mind the following relationship that emerges from the point of view of policy options (Figure 1): 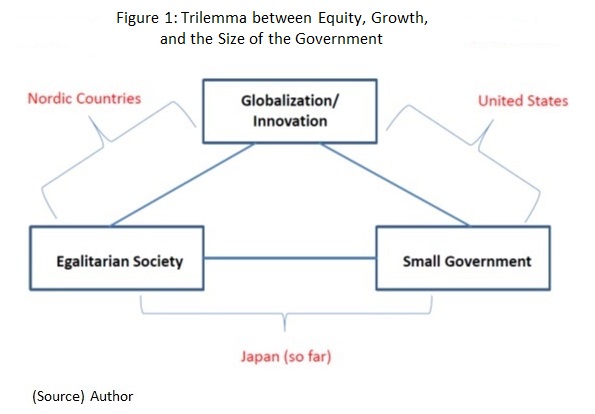 It shows that, when a national economy has three policy objectives, “egalitarian society,” “globalization/innovation,” and “small government,” it is impossible to achieve all three, but has to choose two among the three and sacrifice the remaining one.

The idea of expressing the problem in terms of a trilemma comes from the “impossible trinity theorem” in international finance, and from the more recent discussion of a “political trilemma of the world economy” by Dani Rodrik (2011). Please note that if the national economy is not a democratic nation, it may be able to achieve all three, at least for a short period of time. I am assuming that we are talking about a democratic nation.

My discussion in December’s column can be understood as a situation where Japan is pursuing an egalitarian society and a small government, thereby sacrificing globalization and innovation. The fact that Japan has been pursuing a small government can be confirmed by the small contribution made by redistribution polices in reducing Gini-coefficient, an important indicator of inequality, among the OECD countries (Figure 2). 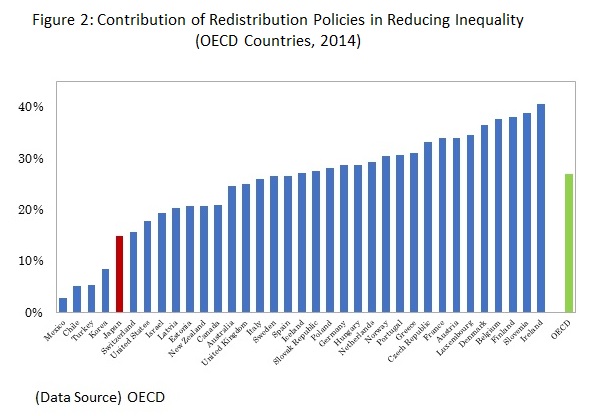 In contrast, the United States seems to have chosen globalization/innovation and a small government, leaving equity to deteriorate (i.e. widening of inequality).

The Nordic countries, on the other hand, seem to have chosen “egalitarian society” and “globalization/innovation” and give up “small government.” The Welfare State is what has been realized, as we all know.

Let us confirm the situation of the Nordic countries from the relevant aspects.

First, globalization of the Nordic countries can be seen in their relationship with the European Union (EU). Denmark, Finland and Sweden are members of the EU, and Finland is a member of the Euro Zone as well.

While Iceland and Norway are not members of the EU, they participate in European Economic Area (EEA) as members of European Free Trade Association (EFTA), and form a part of the single market. The two countries also participate in the Schengen acquis, removing border control for free movement of people between the EU countries.

Second, inequality in Nordic countries have not widened as much as in the other countries. Compared to the Gini-coefficients in other OECD countries, those of the Nordic countries are in the lowest group (Figure 3). 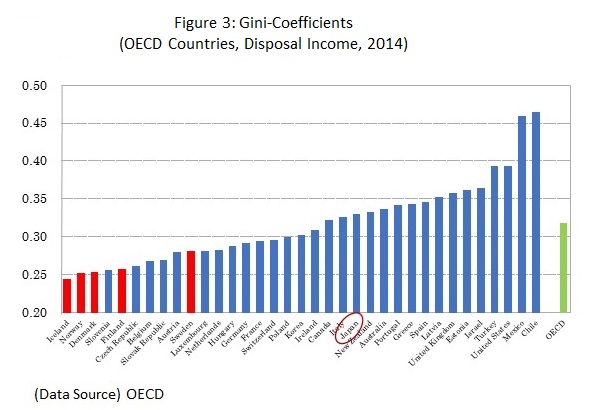 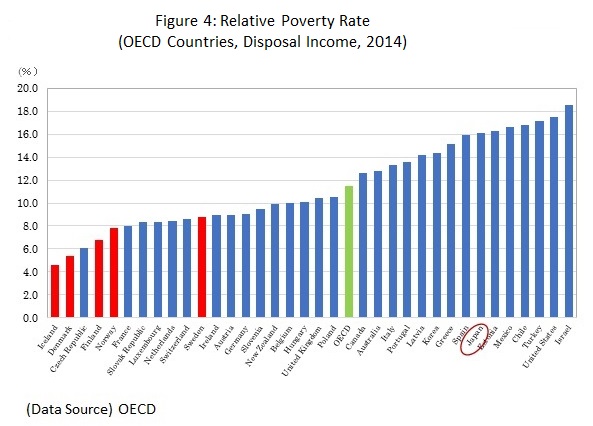 Third, the size of the government has expanded in return. Tax and social security contribution relative to GDP in the Nordic counties are among the highest in the OECD countries. 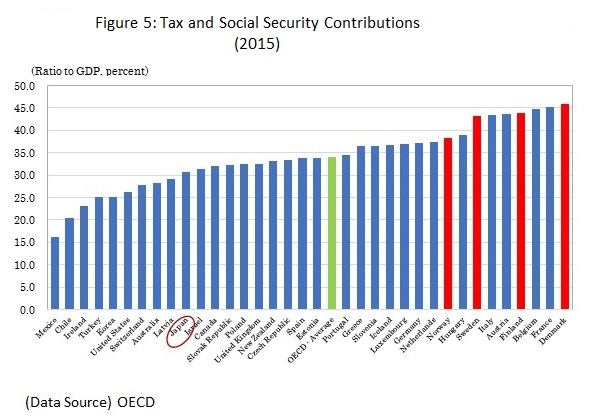 The situation of the Nordic countries provides Japan with important suggestions as to which direction policies should head for. If Japan chooses to pursue globalization/innovation as well as to achieve an egalitarian society, Japan needs to make a shift from a small government towards a larger government.