GDP numbers for the 2014Q1 was revealed in May 15. As Fig.1 shows, the seasonally adjusted real rate of growth over the previous quarter was 1.5 percent (5.9 percent in annualized terms). In addition to the high growth rate, due to the forward shift of demand in anticipation of the rise in consumption tax rate in April, what attracted the attention of economists was the fact that net exports made a negative contribution to real GDP growth rate.

Since the current recovery started in November 2012 (the official date of trough of the most recent business cycle was announced in May 30), net exports have made a negative contribution in three out of five quarters (and the three happens to be the most recent three). It attracted attention because it is in stark contrast with the recent performance of the Japanese economy whose main feature was export-driven growth. It also attracted attention because it seemed as though the depreciation of the yen that had taken place since late 2012 had no positive impact at all. 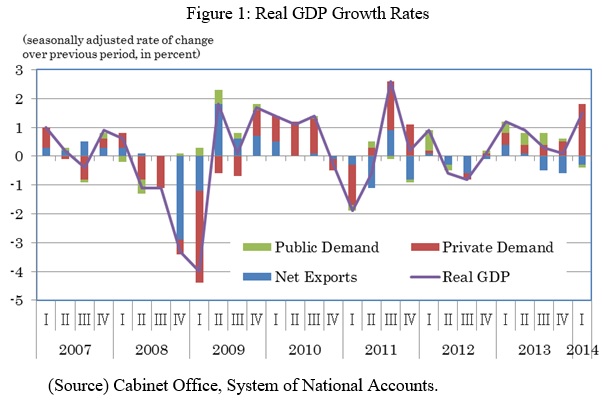 Net contribution of net exports was, in part, a result of the increase in LNG and other fuel imports that have become necessary since the shutdown of nuclear power plants. However, it was also a result of the poor performance of exports, particularly in export volume of goods as witnessed by the customs data.

Why didn’t exports respond to the depreciation of the exchange rate? This is the topic which is going to be picked up in this month’s column. 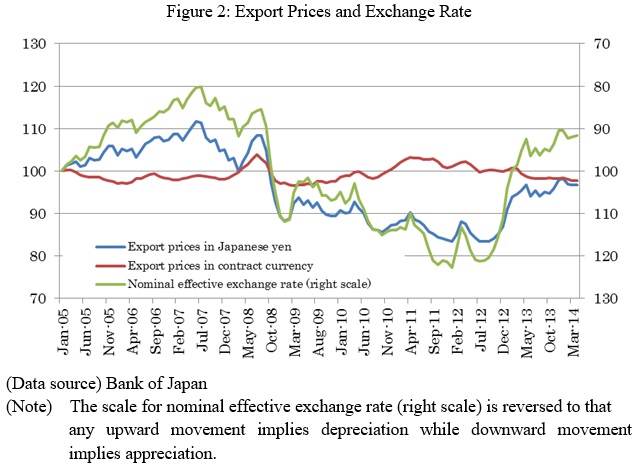 Benefits of depreciation enjoyed through price-effects

From a different point of view, keeping foreign-currency prices constant is an optimal behavior of the firms if they are to maximize export values. Recent estimates of price elasticity of export volumes shows that they are currently below one. For example, an estimate in the Annual Report on the Japanese Economy and Public Finance for FY2013 shows that it is only 0.79 even in the long-term. If this is true, it implies that, when faced with 1 percent depreciation, it is not wiser to cut foreign-currency denominated prices by 1 percent only to gain 0.79 percent rise in export volumes, resulting in (0.79-1.00=) 0.21 percent decline in foreign-currency terms or (0.79-0.00=) 0.79 percent increase in yen-terms. It would be wiser for them to maintain the foreign-currency denominated export prices constant (and suffer 0 percent fall in export volumes) and to enjoy increase in export values in yen-terms by 1 percent, if they are to maximize export values.

By passing, it may be worth mentioning that low price elasticity of export volume could be a result of firms’ recent shift of production sites abroad. Foreign direct investment to shift production site abroad could substitute for direct exports of domestic production. However, the new production site abroad could induce exports of capital and intermediate goods of domestic production. To some degree, the former could be offset by the latter. In addition, such exports could take place between the parent firm and its subsidiary. It is in effect a within-firm transaction which would not be subject to a strong influence coming from exchange rate fluctuations. A low price elasticity of export volumes could have showed up as a result.

Foreign direct investment is often considered to be a factor reducing the impact of exchange rate fluctuations. However, it is because it would result in a smaller export volume. It is important to acknowledge that the responsiveness of exchange rate fluctuation could also be mitigated by the fall in price elasticity of export volumes, as discussed above.

The question posed at the outset was “Why didn’t exports respond to the depreciation of the exchange rate?”