Fiscal implications of the COVID-19 crisis

The outbreak of COVID-19 and reactions by both individuals and the governments have brought a global economic crisis that is equivalent only to the Great Depression of the 1930s. That being the case, governments have introduced fiscal measures to address the crisis. According to the IMF, “more than two-thirds of governments across the world have scaled up their fiscal support since April” (IMF, World Economic Outlook Update, June 2020).

The magnitude of these supplementary budgets was quite significant.

The additional government expenditure authorized by the first supplementary budget totaled 25.7 trillion yen: it included measures to provide fixed amount of transfers to every individual in the population (12.9 trillion yen), to provide liquidity as well as subsidies to small and medium-sized enterprises (3.8 trillion yen and 2.3 million yen, respectively), and to support tourism and other service industries by initiating “Go To Campaign” (1.7 trillion yen).

In addition to the extra spending by the government that adds up to 57.6 trillion yen as mentioned above, the government is mobilizing government-owned financial institutions to provide those in need with no-interest and no-collateral financing. The government estimates that, inclusive of increase in fiscal investment and loan program and induced spending by the private sector, total economic impact will be around 234 trillion yen, or more than 40 percent of GDP.

While these spending will, no doubt, support the urgent needs of the individuals and of the SMEs, it cannot be provided without cost. The cost, in this case, is the heavy burden of fiscal deficit and government debts that will be accumulated. The newly issued government bonds in FY2020, which is the sum of those that was originally planned in the initial budget and those that results from the two supplementary budgets, amounts to 90.2 trillion yen: it is more than double the government bonds issued in the previous fiscal year (Figure 1). 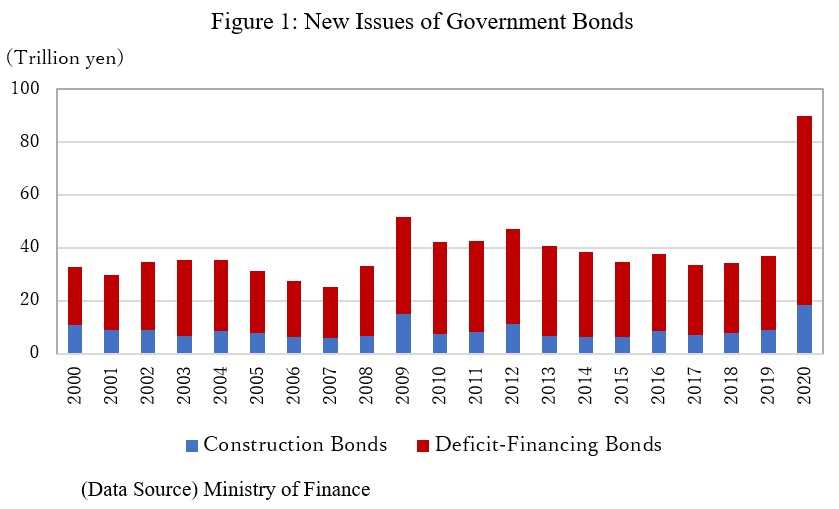 As a result, the outstanding stock of government bonds will reach 964 trillion yen by the end of FY2020 (Figure 2). It means that it will be more than doubled in the last twenty years. 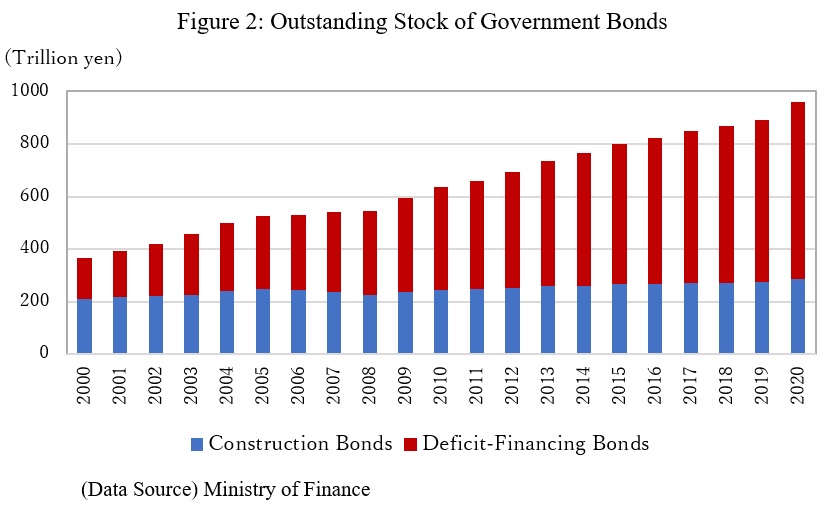 Purchase by the Bank of Japan 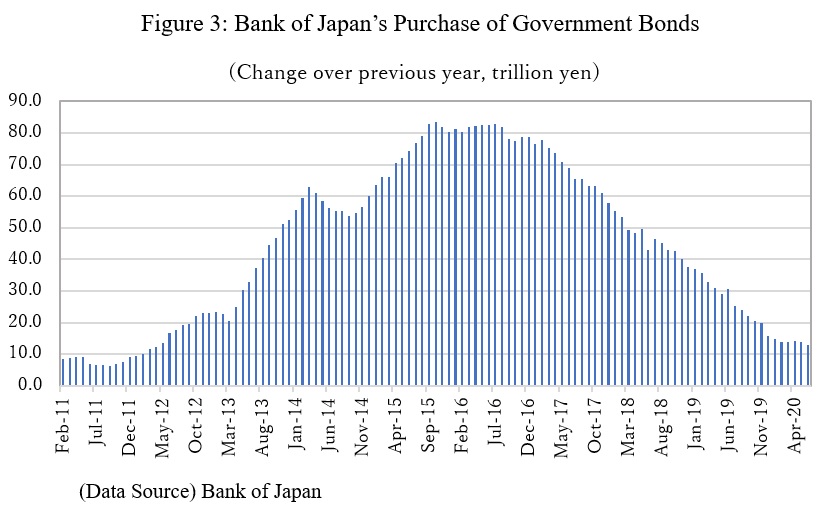 In the longer-term, the government needs to renew its program for fiscal consolidation.

The current framework of achieving a primary surplus by FY2025 while reducing the government debt to GDP ratio at the same time was facing difficulty even before COVID-19 crisis: the medium to long term economic and fiscal simulation that the government publishes twice a year has been showing that the target will not be achieved unless additional policy is introduced: for example, the simulation that was published in January this year showed that the primary surplus will be achieved only in FY2027 under an optimistic growth scenario. Now with a steep increase in primary deficit and a large drop in GDP, followed probably by a slow recovery, should make it even more difficult.

“The Basic Policy on Economic and Fiscal Management and Reform”, a major policy document of the government that comes out every year around June or July is expected to be published by the Cabinet Office soon. It was in this document published in 2018 that the current fiscal consolidation program was authorized. Whether this year’s document will include a new fiscal consolidation program or not should be important for the sustainability of the fiscal situation.

The latest version of the medium to long term economic and fiscal simulation exercise is also expected to be made public by August, in time for the budget formulation process for FY2021 to start. How it shows the prospect of the future fiscal outcome should also have important implications for future policy development.