Japan has been very restrictive in accepting foreign workers.

At end of October 2017, there were 1,278,670 foreign workers (excluding special permanent residents). There has been double digit increases since 2015, and for 2017, it was a significant increase of 18.0 percent over the same period previous year (Figure 1). 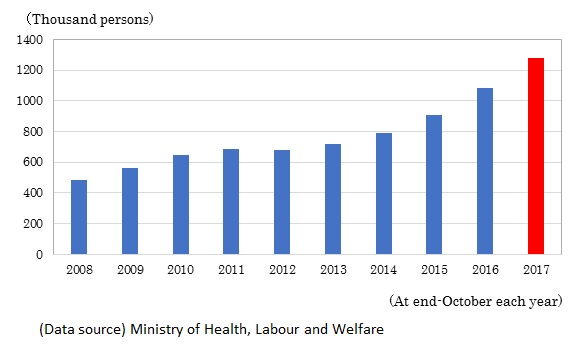 However, the ratio of foreign workers to total labor force in only 1.9 percent. It is significantly lower than that in the United States, major European Countries, and some countries in Asia (Figure 2). 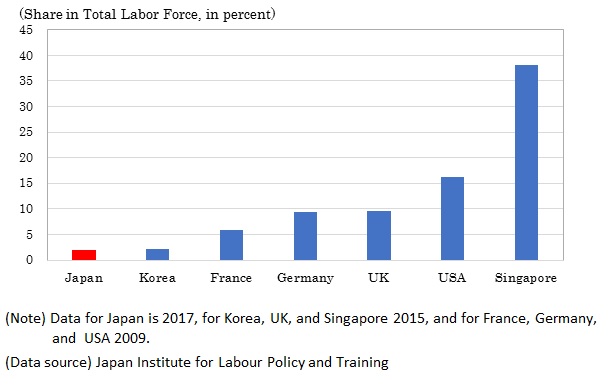 Japan is especially restrictive in accepting unskilled workers. It formally accepts only skilled workers. Status of residence that allows the permitted to work is confined to professional or technical fields. Once allowed to work under this status, those who have high skill are encouraged to stay longer under the point-based preferential immigration treatment. While it has increased by a significant 18.6 percent from the same period previous year, the number is still only 238,412. (Figure 3).

Figure 3: Breakdown of Foreign Workers by Status of Residence
(October 2018) 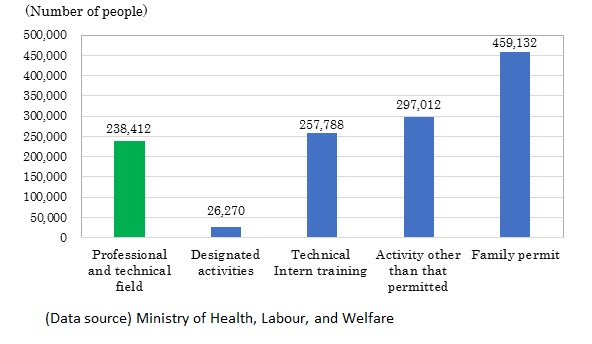 It does not mean, however, that there are no unskilled workers. For example, there is no restriction on their work, either skilled or unskilled, if foreigners have family permit; status of residents as permanent residents, long-term residents, and spouses and children of Japanese nationals and permanents residents. If permission to engage in an activity other than what has been permitted is obtained, foreigners can also work as unskilled workers within certain limits (in the case of students, up to 28 hours a week). Those who have status of residence for designated activities, including those who came to Japan to become nurses and long-term care workers under economic partnership agreements (EPA) with the Philippines, Indonesia, and Vietnam, can work in respective areas. Finally, those who are trainees under the technical intern training program can also work in their specific areas. The number of foreign workers under these status of residence amounts to more than 80 percent of the total (Figure 3). There is, however, no status of residence that permits them to work in unskilled area in any formal way.

The policy towards foreign workers gradually changed as the labor market conditions became very tight in the recent years. There are increasing signs of labor shortages in some specific industries. It led the government to make moves to alleviate the situation by allowing more unskilled foreign workers in a limited way: construction workers are accepted for a limited period of time ending in 2020; period of stay for trainees under the technical intern training program were extended from three years to five; and long-term care was included as a type of job eligible for technical intern program (all becoming effective in 2017).

To make that possible, in November 2, the cabinet finalized the draft legislation that will be proposed to the Diet. It hopes to see the legislation approved by the Diet during the current session, so that it can come into effect in April 2019. It will allow, if passed unamended, to create two new status of residence.

In either case, the areas in which the workers can work will be specified by the government. It is expected that the areas will be those that face serious labor shortage, but they haven’t been announced so far. 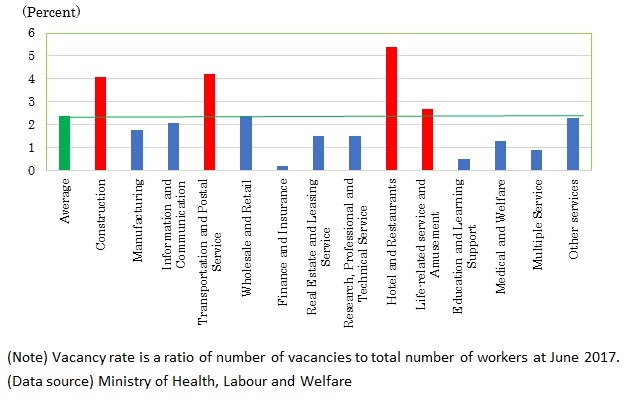 In terms of occupations, sales, service, safety and maintenance, production, driving and machine operation, construction and mining, and transportation, cleaning, wrapping etc. are those who have above-average vacancy rates (Figure 5). 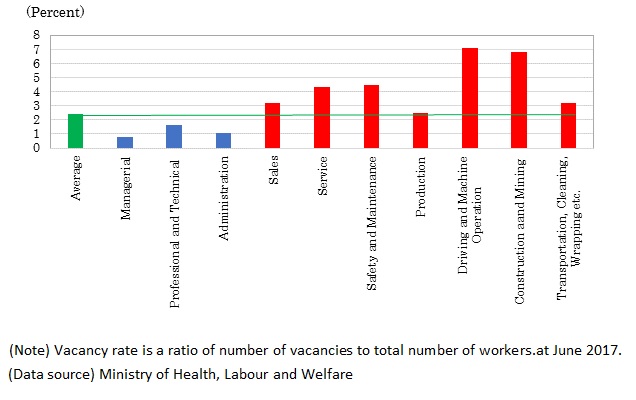 However, for it to be a meaningful policy change towards foreign workers, the following needs to be considered.

First, the changes should not be introduced as a short-term measure implemented to deal with the labor shortage: If it is, the policy may be overturned when labor market situation deteriorates. Instead, it should be introduced from a long-term view: Japan is facing a decline in population that would lead to vanishing local communities, deteriorating living conditions, and unsustainable social security system in the long-term. Foreign workers are required to offset the negative impact declining population brings. (For a discussion of the meaning of accepting foreign workers as a measure to address the negative impact coming from the decline in population, please see https://www.jcer.or.jp/column/saito/index809.html

Second, if we are to think of the change from a long-term point-of-view, it means that we may need to think of allowing workers to bring their family from much earlier stage. It is important because we need them to stay longer in Japan, and also because that would make working in Japan more attractive.

In this context, it is important to take note of the fact that there is a strong competition for foreign workers. On one hand, some countries in Asia are trying aggressively to attract foreign workers. On the other hand, developing countries are steadily growing so that workers are needed to support its own economies. Many of them are also witnessing their own population to age and decline. As a consequence, capacity for the developing countries to allow their people to go abroad and work is quickly falling.

Third, we must look at the impact of accepting foreign workers in a more dynamic way. Even though there is an understanding of the situation form an economic point-of-view, many tend to be concerned with the cost of accepting them in the local community, such as those for housing, education, and social security. However, foreign workers will be paying taxes and social security premiums. Moreover, they will contribute in increasing consumption and investment in the community and also in promoting innovation by providing new ideas.

We can have more brighter prospect for the future if more foreign workers are accepted than just watching local communities to collapse and vanish in face of the declining population.