Yen has been depreciating since March 2022 when the exchange rate was initially around 115 yen per US dollar (Figure 1). It reached 130 yen in April, and 140 yen in September. The intervention took place in 22 September when yen approached 146 yen, and in 21/24 October when it came close to 152 yen (date of intervention in October is yet to be confirmed by the authorities). 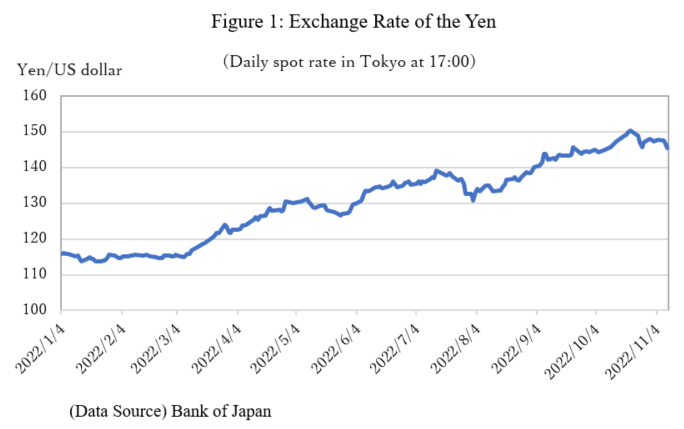 According to the data published by the Ministry of Finance, the amount of foreign exchange market intervention was 2.8382 trillion yen in 22 September, and was a total of 6.3499 trillion yen in 21/24 October (Figure 2). It was less than the most recent episode of intervention in 2011, but significantly more than the previous intervention that was made to support the yen in 1998. 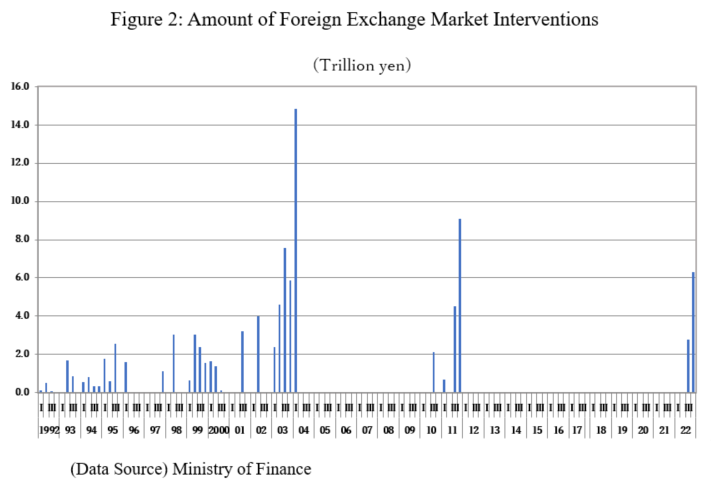 Intervention shifts money from the private sector to the government

The intervention in September and October involved selling US dollar and buying yen. In order to sell US dollar, the authorities have to draw down their foreign reserves. Since the change in foreign reserves also reflects the change in valuation of the reserve assets and interest paid, it is difficult to identify the direct impact of the intervention, especially in terms of the way it affected the composition of the foreign reserve. However, judging from the direction and the magnitude of the changes, it can be assumed that it was financed by selling securities, most probably US treasuries (Figure3). 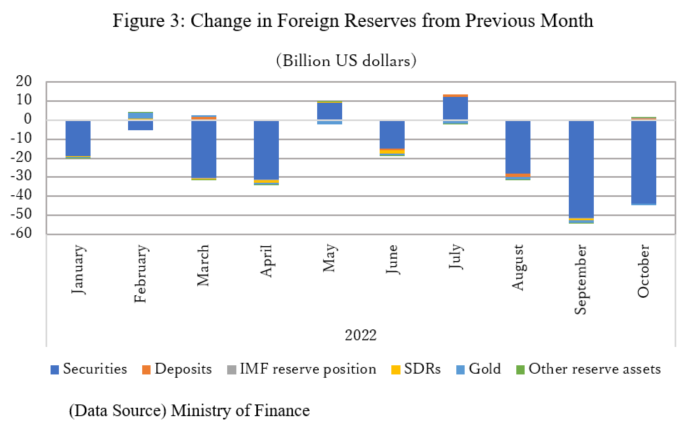 When US dollar is sold as a part of the intervention, Japanese yen is received by the government in return. The data on receipts and payments of the foreign exchange fund with the private sector shows that the foreign exchange fund recorded a net receipt of 3.0211 trillion yen in September, and 6.4902 trillion yen in October (Figure 4). This shift in the holder of money should affect the monetary conditions of the economy. 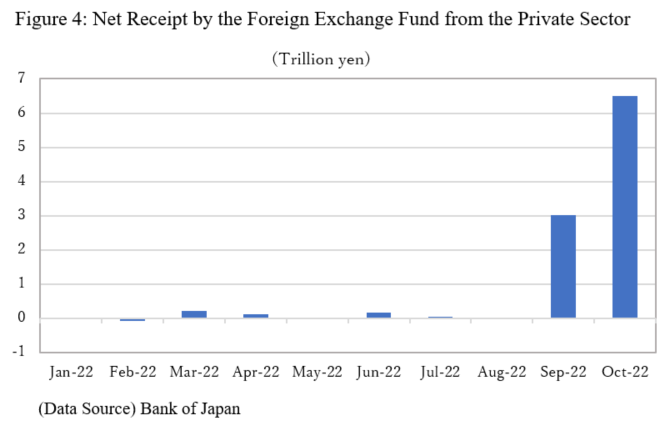 Monetary base has been left to decline

Since the net receipt by the foreign exchange fund from the private sector implies that there was a shift in deposits from the private sector to the government, it should affect the outstanding balance of the current account at the Bank of Japan held by the financial institutions, which is a part of the monetary base. In fact, monetary base has been declining since May 2022 and the magnitude of the decline was significant in September and October 2022 (Figure 5). 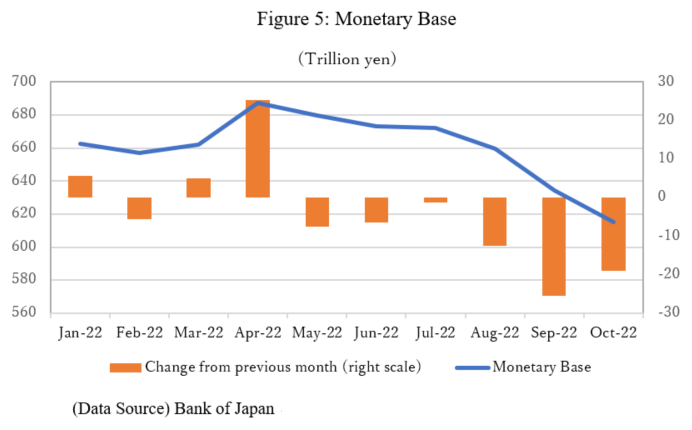 Foreign exchange market intervention has not been sterilized

In a way it is strange because, if the objective of the Bank of Japan is to maintain monetary easing, it should sterilize the reduction of the current account balance by purchasing assets so that the monetary base would be kept the same as before. If it is not sterilized, it should lead to some tightening of the monetary condition and an increase in interest rates.

In fact, that is what we witness. The 10-year yield, for instance, which should be kept around zero percent with a margin of +/- 0.25, has reached and has roughly stayed at the upper ceiling since late March when the depreciation of the exchange rate started to take place (Figure 6). 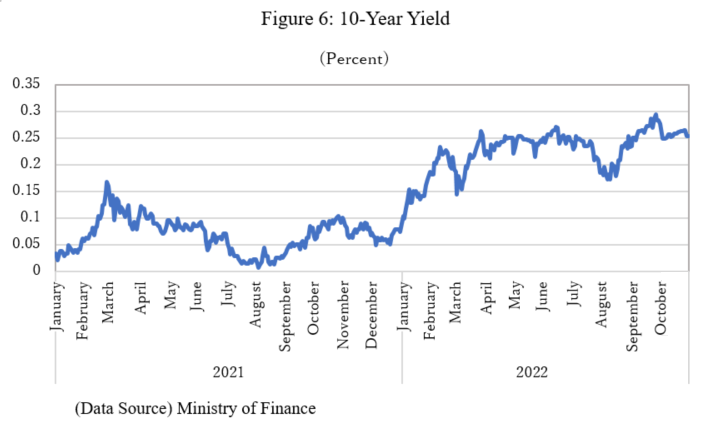 What it suggests is that, when the Ministry of Finance intervened in the foreign exchange market, the Bank of Japan supported the action by refraining from sterilizing it: by allowing the interest rates to rise, it should discourage capital outflow and remove pressure from the exchange rate to depreciate. Moreover, it could even be said that the Bank of Japan already had been addressing the depreciation of the yen from the early stage by allowing the interest rate to rise to its upper ceiling since late March.

These actions reflect the difficult decision that has to be made by the government and the central bank in order to address the depreciation of the exchange rate which worsen the macroeconomic situation when it is already suffering from a weak recovery and a rising primary goods prices. However, trying to maintain monetary easing while preventing the exchange rate to depreciate is a challenge to the impossible trinity of international finance (describing the difficulty of achieving free capital flow, independent monetary policy, and stable exchange rate all at the same time). It is not an easy task to accomplish.