Guideline for University Graduates Recruitment: How long will it stay?

The guideline for recruitment of university graduates to be observed by the companies, or the shukatsu rule (to be quoted as “guideline,” hereafter) was initiated in early 1950s. It has been modified for a number of times but the most recent guideline, which was introduced in 2014 by the Keidanren and the universities, sets the timing of a number of important activities for the recruitment process: providing information about recruitment is to start from the last month (March) of the 3rd year at the university; selection process from June of the 4th year; and formerly offering jobs from October of the 4th year. The idea was to promote orderly recruitment process while ensuring a sound environment for students to study.

Keidanren’s announcement of scrapping the guideline

What to do with the guideline suddenly became a widely debated topic among the business, academia, and government when, in September 2018, the chairman of the Keidanren (Japan Business Federation) announced that it will no longer uphold such a guideline for students who will be graduating in March 2021 and thereafter. That led to an anxiety among the students who suddenly became unsure how the recruitment process is going to be for them.

One of the reasons for the Keidanren’s announcement is that there were many companies that did not observe the guideline. Surveys that were undertaken by the government in 2019 show that timeline was not observed. 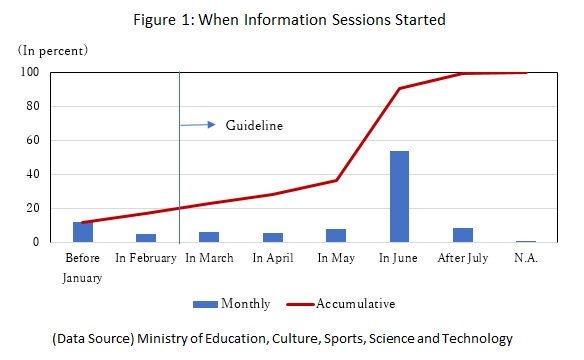 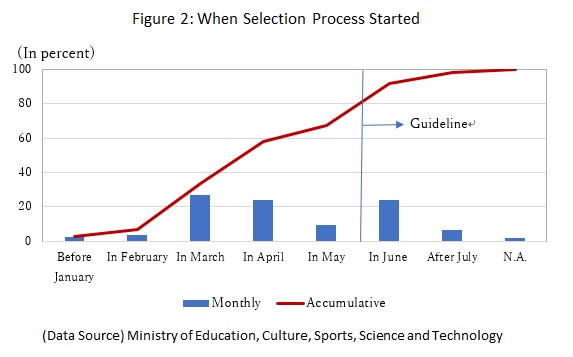 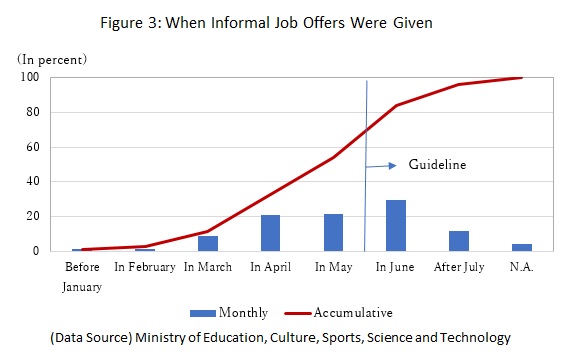 In this kind of a situation, there are concerns among the Keidanren companies that, if they observed the guideline, they may be too late in getting talented students who have already been offered jobs by the outsiders. This seems to be at the background of the announcement made by the chairman of the Keidanren to terminate the guideline.

A new guideline has been introduced by the government

Why is a guideline necessary?

Why do we need a guideline for the recruitment process of new university graduates? What will happen if there is none?

You can easily imagine that there will be a stiff competition among the firms to get talented student as early as possible. The recruitment process can be over (informal job offers made) as early as February of the 3rd year of the university, which was the case in mid-1960s when there was no guideline. Recruiting process that takes place that early will disturb the students’ study at the university and it could also be a long process for some of the students. That is why setting the starting dates for information sessions (e.g. March), and for interviews (e.g. June) are important from the students’ and the universities’ point of view.

How about the setting of staring date for formal offering of jobs to the students (e.g. October)?

This should be important for the firms’ point of view. At present, many firms offer job formally on October 1st, when the firms also have a kind of a ceremony for the students to attend. Students have to attend ceremony in order to conclude the recruitment process. If the student had received a number of informal jobs offers, he/she will have to make up his/her mind and keep the one to join and surrender the others. It means that, from the firms’ point of view, as of October 1st, they can be sure that the students who came to the ceremony will actually join their firms for sure. If the desired number of students are secured at this point of time, it means that the recruitment process for the firms also concludes. If the desired number is not fulfilled, it means that they have to engage in additional recruitment.

Securing a certain number of students is important for firms because they have to fill the vacancies that are created by the mandatory retirement of their employees. Since the Japanese employment system has been based on lifetime employment system, of which mandatory retirement system is an essential part, firms can fairly accurately forecast the vacancies that, in turns, allows you to calculate the required number of new employees to hire. Under such a system, it becomes vital for the firms to secure hiring of a desired number of graduates through the recruitment process.

The Japanese employment system is admittedly gradually changing. In addition to the increasing share of non-regular workers, there are now more mid-career hiring of workers who have certain skills and expertise. It is further expected that job-based employment, instead of the current membership-based employment, would also increase. The changes imply that there will be more competition to employ students with sufficient knowledge and skills and to secure diversity of the workforce. Guidelines would be difficult to observe if there are any outsiders; it will be a disadvantage for those firms to observe the guideline. Under that kind of a situation, guidelines can exist only on paper.

When there is free competition for talented student, it is important to formally employ the students as quickly as possible. That is because, if it is going to take time, other firms can make an approach to the students and hire them. There will be no assurance that the students will join the firm in a distant future.

However, hiring of the student immediately is difficult if the student is still in middle of studying at the university. In such a situation, unless the firm is successful in maintaining close contact with the student and also successful in showing that the firm is attractive enough for the student to join after graduation (probably by means of internship and part-time employment), many firms will approach students right after graduation and make decision whether to hire them within a short-period of time. That means that new graduates will no longer join the firm at the same time (e.g. April) but will be hired whenever the students are able to join.

The question of how long we can maintain the guideline is deeply connected to the issue of how long the Japanese employment system can be sustained as it is.