Japanese immigration policy is known for its restrictiveness. The acceptance of foreign workers, especially of the unskilled, is very limited and the share of foreign workers in total labor force is still only 2.5 percent in 2015.

Japan’s policy towards emigration has not been restrictive. One may even say that it was rather aggressive. As Figure 1 shows, there were many Japanese who moved out from Japan during the period before, and immediately following, the World War II. As a result, there are now many Japanese descendants in North and South America. 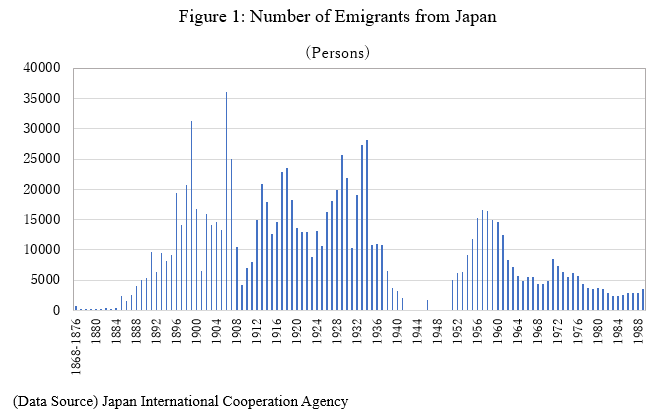 However, immigration to Japan has been very restrictive. It not only means that getting a Japanese nationality, a permission of permanent residence, or being accepted as a refugee is difficult, but also means that getting a working visa is very difficult. While some restrictions have been relaxed to foreign workers, especially when it is a professional or a skilled worker, there still exists a significant asymmetry between outward and inward international migration policy.

Regime after the World War II

During the period immediately after the war, all of the policies, including immigration policy, were determined by the General Headquarters of the Allied Powers (GHQ). In May1947, the Alien Registration Imperial Ordinance (which happened to be the last ordinance issued by the Emperor before the enforcement of the new Constitution) redefined Japanese citizenship by which Koreans and Chinese, who use to have Japanese citizenship, became foreigners. At the same time, in view of a significant number of illegal entrants into Japan, tight control of immigration was introduced.

In response to joining the Refugee Convention in October 1981, a new Immigration Control and Refugee Recognition Act was introduced in January 1982. It introduced “short-staying” and “training” as new statuses of residence. As for the status of residence based on the activity, which allows one to works in specific fields, six categories were newly defined.

1980s was a period of relatively high growth. After successfully overcoming the negative impact of the two oil crises, Japanese economy enjoyed export led growth which was driven by a depreciation of the yen. It invited a trade friction between Japan and the United States and, eventually, led to the Plaza Accord which ignited a steep appreciation of the yen that brought a downturn of the economy. However, soon it turned into an expansionary period which later became known as the “bubble economy” period. The tight labor market situation and a labor shortage seen in some occupations which were considered to be 3Ks (initials of the Japanese terms for “dirty”, “dangerous”, and “demeaning”) led to an amendment of the Immigration Control and Refugee Recognition Act which came into force in June 1990.

The amended Act recognized the rights of Koreans and Chinese who lost Japanese citizenship as a result of the World War II by introducing a new status of residence, “special permanent resident”, in November 1991. In addition, it responded to the call for accepting more foreign workers to fill the labor shortage, but it only did it in a partial way.

On the one hand, it welcomed professionals and technician to come into Japan. Total number of statuses of residence based on activity which allowed one to work in a specific field was expanded; many of which corresponded to highly-skilled professionals.

However, what should be noted is that it also opened ways to de facto accept unskilled workers by (a) introducing a new status of residence, “long-term residents” (given to individuals with Japanese ancestry), which was not subject to any restriction on work, (b) introducing new status of residence such as a student of Japanese preparatory school, and (c) allowing both students of universities and Japanese preparatory schools to work in any fields if they are granted special permission and if it is for a limited hours only (28 hours a week).

A new status of residence which allowed a person to work in an unskilled field was also introduced in 1993 when “technical intern trainees” was added to the list. While the purpose was to train the person to be able to contribute to the economic development of their home country after the training period, it de facto supplied unskilled labor to the industries facing shortage of workers: many of them worked in an unskilled field.

Figure 2 shows that all of the statuses of residence showed a significant increase since the amendment of the Act in 1990. 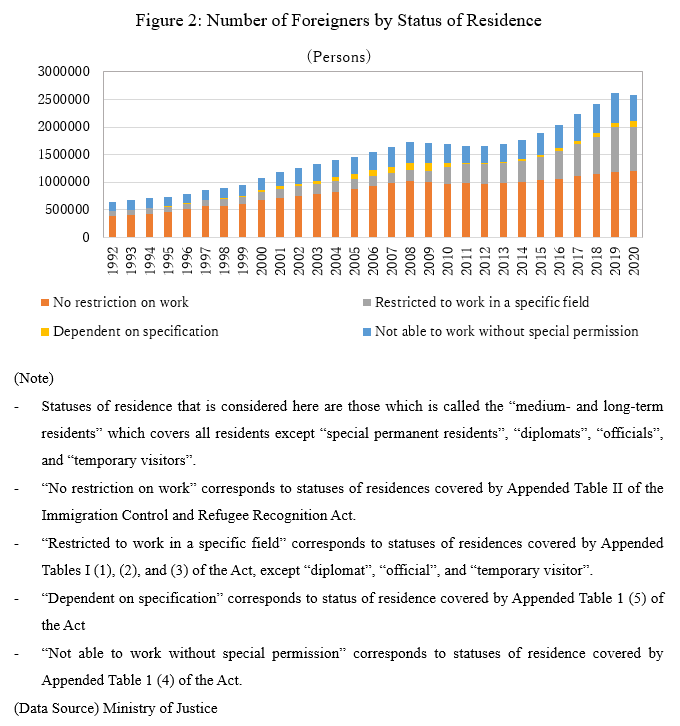 However, what should be noted is that the new arrangements led essentially to an increase in number of unskilled foreign workers working in Japan. If the status of residences is grouped by the ability to work in an unskilled field, Figure 3 shows that the majority of the increase was in those that enabled the foreigners to work in any field, including the unskilled, with or without permission. 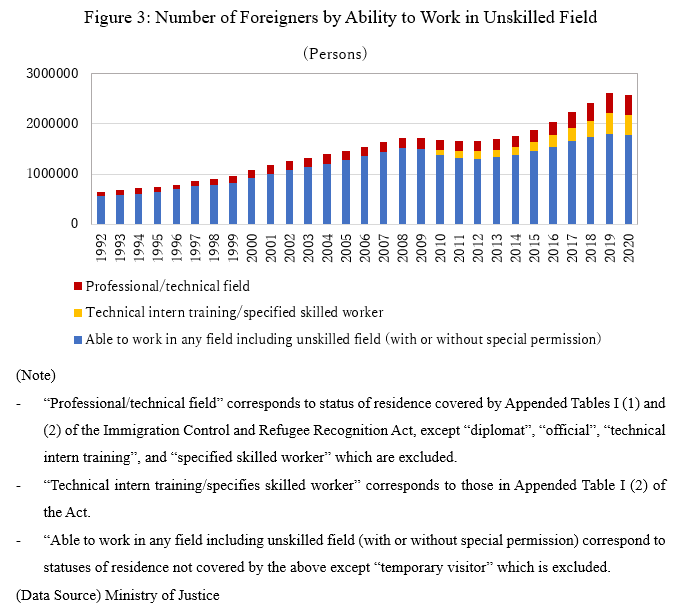 On the other hand, Figure 4 shows that foreigners having status of residence of “technical intern trainees”, “students”, “long-term residents”, which are those which have increased significantly, have relatively less educational background than the foreigners having status of “engineers and specialists in humanities/international services”, which corresponds to more skilled workers and which also have increased but is still limited in its total number. It suggests that the workers entering the country under the first three statuses of residence would be working in unskilled fields. 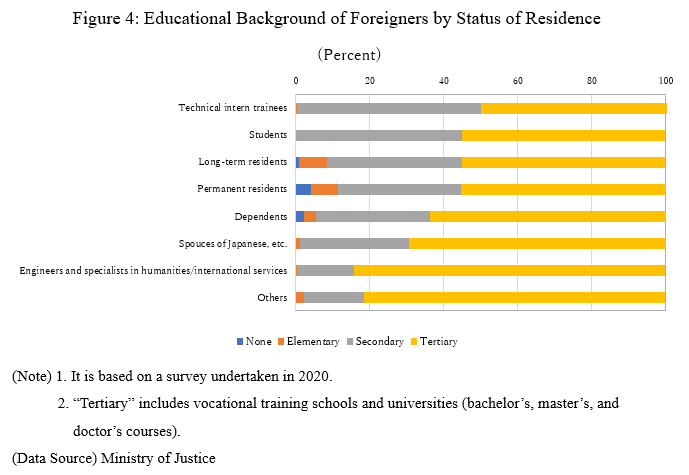 Reasons for the restrictive stance towards unskilled workers

There are number of reasons for the partial response to the needs of the industries facing labor shortage by the amendment of the Act in 1990.

First is the concern that increase in foreign workers would create problems to the Japanese economy and society. The problems included the impact they may have on the employment and wages of the native workers, cost that the society may have to bear in accommodating foreign workers, and the frictions that may emerge from the cultural and social differences. Even the employers’ federation at that time seems to have been concerned about the implications of accepting more foreign workers on the economy and the society of Japan. It is easy to imagine that it was also influenced by the Germany’s experience with the Gastarbeiter. 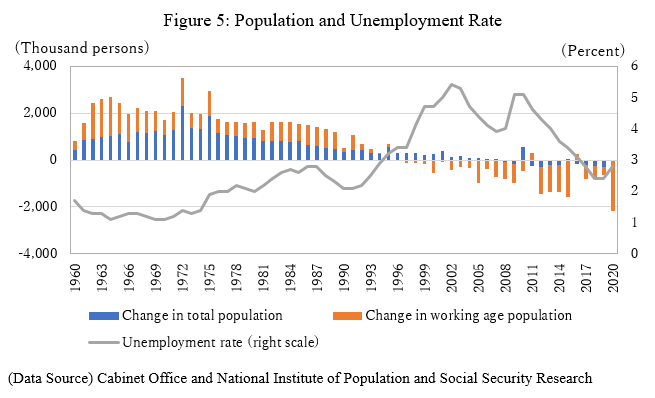 However, the Japanese working age population starts to decline in 1996 and the total population also starts to shrink in 2008 (Figure 5).

In response, acceptance of skilled workers was further promoted by expanding measures to invite more skilled workers such as the introduction of a point-based system in May 2012 and by introducing a new status of residence, “highly-skilled professionals”, in April 2015.

In addition, while the general principle of not accepting unskilled workers was maintained, the de facto acceptance of unskilled workers was expanded by expanding the fields subject to technical intern trainees to include ling-term care, extending the length of stay from three to five years in November 2017, and accepting construction workers for a limited period ahead of the 2020 Tokyo Olympics and Paralympics Games in April 2015 (until the end of FY2020).

A more drastic change took place in April 2019 when a new status of residence “specified skilled worker”, which allowed less skilled workers to work Japan, was created. It was a response to the decline in the unemployment rate that fell below 3 percent: the difference from the situation in 1990 was that, this time, not only the working age population but also total population was shrinking.

Whether these changes are going to lead to a further change that would formally allow unskilled workers to work in Japan or not is uncertain. While it seems inevitable if the negative impact of the shrinking population on the Japanese economy needs to be offset, there are still cautious views about accepting more foreign workers.

In addition, Asian economies, where many of the foreign workers in Japan comes from, have developed rapidly, and, at the same time, have started to face aging and shrinking of the population. It means that they themselves need the work force in their own countries. Whether Japan can be an attractive destination even under these circumstances depends greatly on the change that would take place in Japan.

Household Consumption: Why is it still below the pre-pandemic peak?