Household savings rate: going up, or down?

Japanese household savings rate used to be very high: at its peak in mid-1970s, it was about 23 percent of household disposable income. Explaining the high Japanese savings rate was one of the most popular topics for an economics paper.

However, since then, it has gradually fallen: if fell below 10 percent in FY2000, and it even turned negative (-0.9 percent) in FY2013. It was expected that the savings rate of the household will keep on declining (for the reasons to be mentioned below), and, from savings-and-investment-balance reasons, the current account surplus that Japan had almost continuously since late 1960s will eventually turn deficit.

Trend has reversed since FY 2013

The performance of the Japanese economy since FY2014 have rejected that kind of forecasts. The national account figures for FY2017, which was published in December 25 last year, revealed that household savings rate has been rising since FY2013 to reach 2.3 percent in FY2017 (Figure 1). 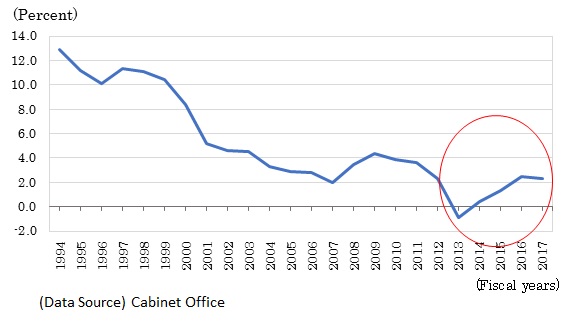 Net lending by the domestic sectors to overseas, which is almost equivalent to current account surplus in the balance of payments statistics, has risen to 4.1 percent of GDP, the largest surplus in ten years (Figure 2). 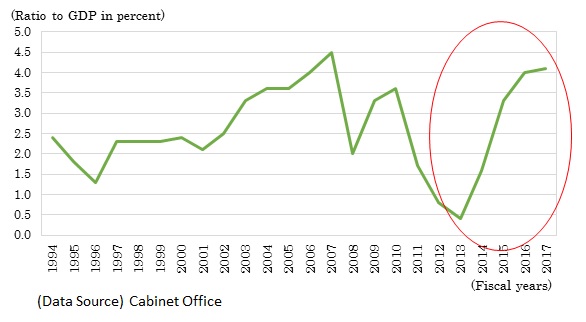 Reasons for the temporary reversal

Why did the forecasts on household savings rate turn out to be wrong?

The long-term declining trend witnessed until FY2013 was the result of the aging of the population in Japan. Life-cycle hypothesis tells us that elderlies are dis-savers so that when their share in the population rises, the savings rate for the total households would fall. If that is true, since the aging process is still proceeding, household savings rate should continue to fall even after FY2014.

Even though that is the basic trend, there seems to be some special factors at play after FY2014 which made the declining trend less obvious.

First is the temporary impact of the consumption tax rate hike that took place in April 2014. Since retail prices inclusive of consumption tax are going to rise, consumers brought forward their purchases, especially of expensive and durable goods, which otherwise should have taken place after April. The result was a surge in consumption before April (which means it took place in FY2013), and a drop of consumption after April (which means it took place in FY2014). It implies that, given the level of disposable income, savings should have fallen in FY 2013 and risen in FY2014, which coincides with the observation.

Second is the consequences of an increase in precautionary savings. Because of the slowdown of the economy in response to the consumption tax rate hike, consumers faced increasing uncertainty about the future of the economy. It is reflected in the consumer confidence index which shows a deterioration in the index in FY2014, limited it may be compared to the post-Lehman shock drop (Figure 3). 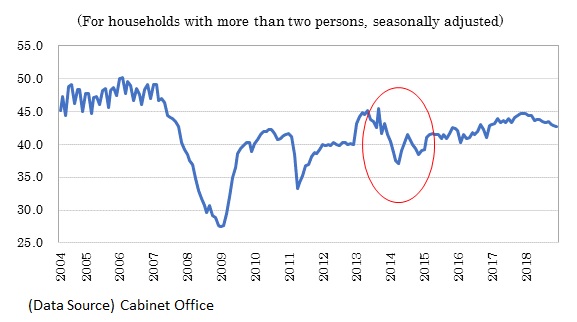 It seems to have led to a tightening of spending and building up of savings by the households. Similar reaction by the households that led to a rise in their savings rate also seemed to have taken place after the Lehman shock of 2008, albeit at a larger magnitude.

While the reality in Japan that households do not hold so much of corporate shares rejects the assumption behind the theory, Figure 3 suggests that there may be such a substitutability. In fact, correlation coefficient between the savings for period FY1994-FY2017 is 0.9052.

Since the household savings rate has been rising in the recent years, if the substitutability theory holds, it should be accompanied by a falling corporate savings. However, the fact is that corporate savings continued to rise during the period (Figure 4). 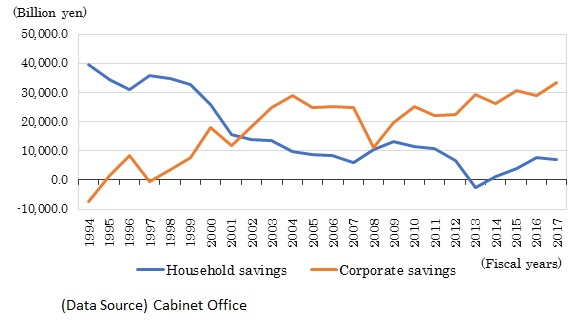 Why is it, then, that there is no declining trend for net lending by domestic sectors to overseas (i.e. current account surplus), as Figure 2 shows.

When household saving rate falls, net borrowing by the overseas sector will also fall when (a) domestic savings as a whole also falls, while (b) domestic investment remains the same.

However, domestic investment did not remain the same; rather, it fell. It explains why the net lending by the domestic sector does not show a falling trend. 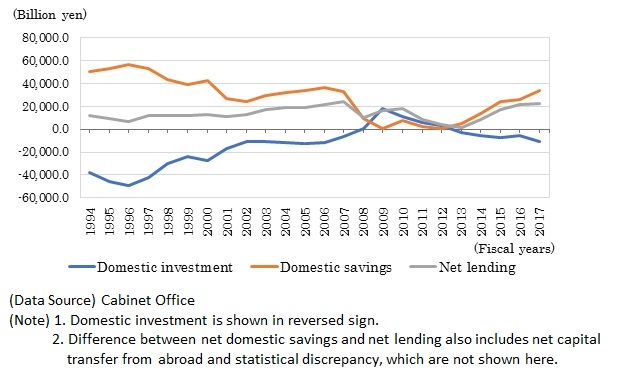 Whether household saving rate is going to fall again, and whether current account surplus is going to vanish is an issue which has important implications for policies. In particular, for a country like Japan with high government debt, it is of vital importance whether we have to depend more on foreign savings or not. The earlier current account turns into deficit, the quicker we need to achieve fiscal consolidation. The development of household savings will need a closer scrutiny.