Data on household savings rate for 2020 was published

On 24 December 2021, the Cabinet Office published the data on national accounts for 2020. It included the data on household savings rate, which was of interest for a couple of reasons.

One of the interests is in the extent by which it was affected by special cash transfer to the individuals that was made by the government in Spring 2020. There was a large increase in bank deposits which also affected money supply in the second quarter of 2020. How it affected the household savings rate is of interest, especially from the point of view of the effectiveness of such a policy.

The other is whether the household savings rate in 2020 have followed the long-term trend of a falling household savings rate or not after excluding the possible impact of the cash transfer mentioned above. It is important from the point of view of the prospects for investment and the current account in the medium-term. 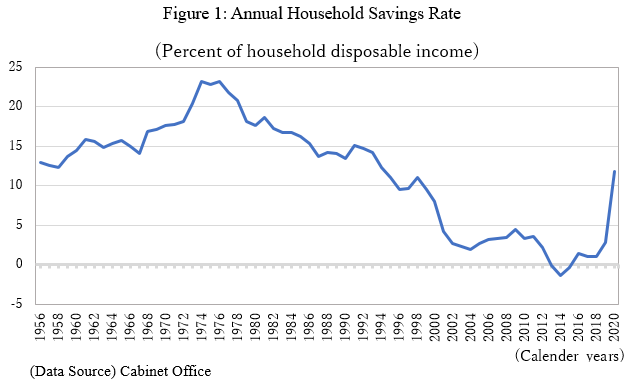 Reasons for the steep rise in 2020

The extraordinary jump of the household savings rate by 9 percentage points seems to be explainable only by the special cash transfer. The details of the data do show that households’ receipt of “current transfer, not elsewhere included” had increased by 14.8 trillion yen, which, in turn, increased “household disposable income” by 12.5 trillion yen.

However, there was another factor at play. Household consumption also declined by a magnitude of 16.5 trillion yen. As a consequence, household savings increased by 28.9 trillion yen in total.

Therefore, the extraordinary jump in the household savings rate in 2020 was a result of both an increase in cash transfer from the government and a fall in consumption by the households which resulted from the restriction on peoples mobility under the COVID-19.

These facts can also be confirmed by the quarterly data on the household sector. Figure 2 shows the seasonally adjusted data for quarterly household savings rate. 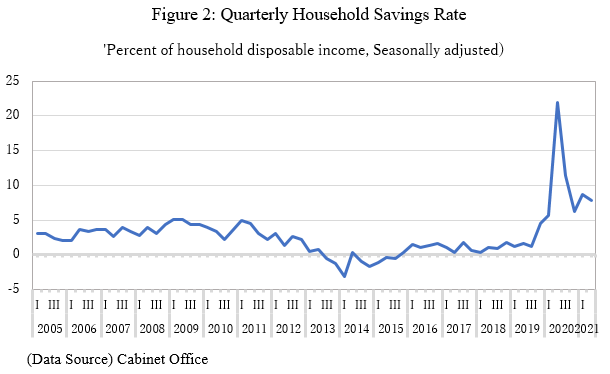 Reasons for the apparent reversal of the long-term trend

What could be the reasons are as follows.

First is the impact of one-time factors. The impact of the COVID-19 and the policy responses to the pandemic that we discussed above is an example, but there could be others.

For example, a surge in household consumption just before the consumption tax rate hike leads to a drop in the savings rate in the quarter before the tax rate hike (and a somewhat offsetting increase immediately after the hike). That seems to be behind the negative savings rate that appeared in CY2014 (Figure 1), or more specifically in the first quarter of 2014 (Figure2).

It seems to suggest that changes in labor income during business cycles are seen as transitory incomes by the households rather than as permanent incomes. It is consistent with the fact that workers tend to be rewarded by bonuses rather than by “base-ups” (permanent increase in the basic wage) in Japan.

Since Japan was in a relatively long expansionary phase under Abenomics (in fact, the second longest after the second world war), it may have contributed in raising the household savings rate above the long-term downward trend in the recent years.

Third is the implications of the worsening situation of fiscal and social security systems. The priority of fiscal consolidation rose in 1990s (Fiscal Structural Reform Act passed the Diet in 1997) and of social security reform in 2000s (major reform of the pension system took place in 2004). Because people became more aware of the increasing uncertainty surrounding the future of the contributions paid to and the benefits received from the government, households may have started to make precautionary savings.

The future of households saving rate in Japan is important for a number of reasons.

If household savings rate falls, it may constrain the financing of private investment. It could happen because there is a strong correlation between domestic savings and domestic investment in Japan: It reflects the fact that Japan is not good at inviting foreign savings to finance investment.

Even if private investment is not constrained, the decline in savings may lead to a net borrowing situation for the country as a whole, bringing about a current account deficit. If the latter occurs, it may lead to an increase in foreign investors who may have more critical eyes on the fiscal situation. It could potentially strengthen the pressure towards higher long-term interest rate.

As these possibilities suggest, there are good reasons for paying more attention to the future of the household savings rate in Japan.