How COVID-19 has Impacted on Household Consumption

Drop in household consumption in spite of special cash payment

The Cabinet Office published, on October 16, an estimate of the household disposable income and savings for April-June quarter of 2020. According to the estimate, there was a steep increase in nominal household disposable income in the quarter. In terms of the seasonally adjusted rate of increase, it rose by 9.7 percent over the previous quarter (Figure 1). It is mainly due to the receipt of special cash payment of hundred thousand yen per individual that was appropriated in the first supplementary budget for FY2020 approved by the Diet in April. 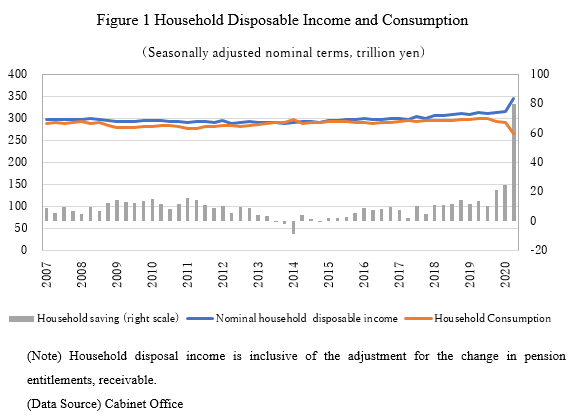 However, household consumption did not react to the increase in disposable income. In fact, it dropped by 8.5 percent, the largest drop since 1994 (the year which the current version of GDP starts). As a result, household savings shot up by 22.5 percent and the household savings rate rose to 23.1 percent from 7.8 percent in the previous quarter.

Since the special cash payment is a one-time temporary increase in income, it was not expected to have a significant impact on the household consumption to start with. But the household consumption actually fell during the period. It shows that there were both supply-side and demand-side constraint on spending due to the declaration of a state of emergency that was effective between early-April and late-May, and other reactions that was taken by the businesses and individuals to counter COVID-19.

The breakdown of nominal household consumption shows the specific feature of its drop. According to the breakdown of household consumption by types of consumption, what has significantly contributed to the drop is the drop in purchase of services (Figure 2). It dropped, in seasonally adjusted terms, by 12.5 percent from the previous quarter. This is a drop that is unseen in the past including the period immediately after the Lehman shock where durables and semi-durables made a large negative contribution but not services. 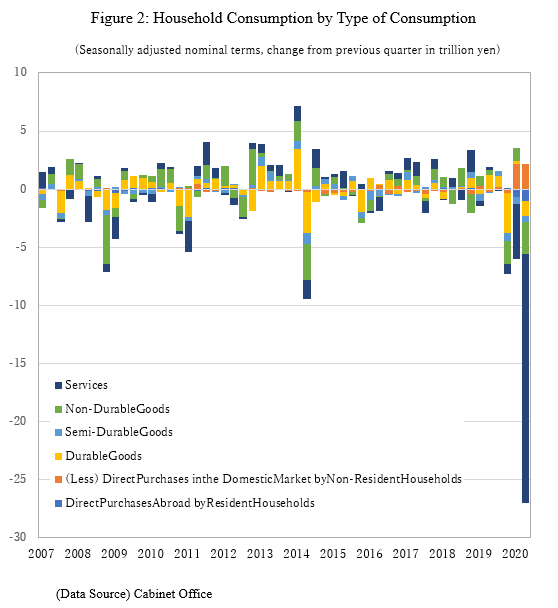 What kind of services were affected the most? In order to see the drop in more detail, we refer to the monthly data publishes as the Household Expenditure Survey (for two-or-more-person working households).

The item groups that showed a significant drop in consumption between April and June included services such as: meals outside home (e.g. eating out), medical services, public transportation, school fees, recreational services (e.g. accommodation services, package tours, and lesson fees), and social expenses (Figure 3). Consumption of these items dropped because of the people’s reaction to the COVID-19, including the impact of the declaration of state of emergency, led to shut-down of businesses that offered these services and to the behavior of households to stay indoors so that purchasing of these services were made difficult. Staying at home also meant that they could save on clothing & footwear for business and entertainment purposes: that is why these goods also showed a significant drop between April and June. 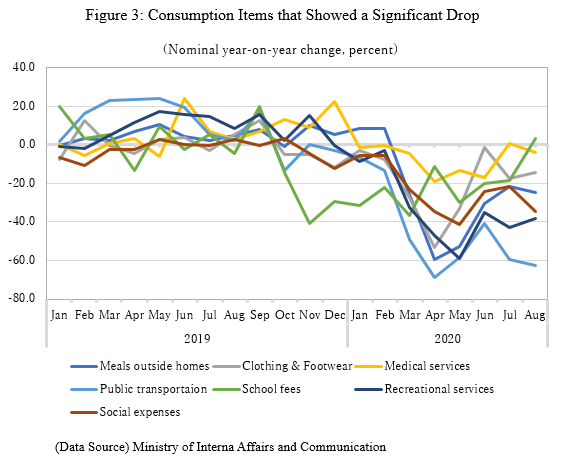 Household Expenditure Survey also reveals that spending on certain goods increased during the period (Figure4). They include goods such as: food (excluding meals outside homes), household durable goods, medical supplies and appliances, school textbooks and reference books for study, and recreational goods. They reflect the needs of the family members who had to stay at home to eat, to work, to study, and to enjoy. As a result, some of the drops in services was offset by increase in alternative goods. For instance, total spending on food didn’t show so much of a change when purchase of food for home consumption was added to the expenditure on meals outside home. 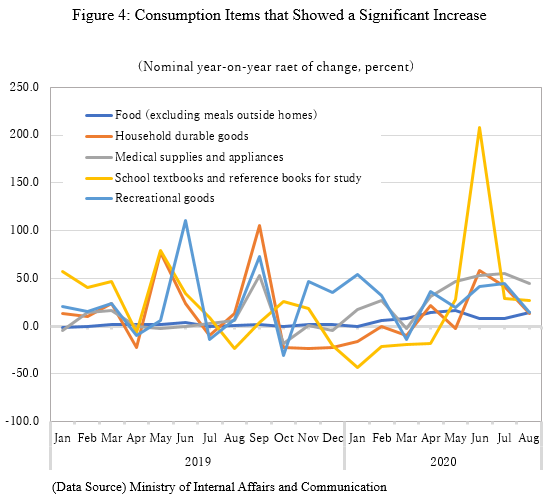 After the withdrawal and start of the “Go To Travel” campaign, consumption is showing signs of recovery albeit from a low level. However, the situation may differ from item to item: certain items would but certain items would not see a recovery. It should reflect the structural change that has started to take place while businesses and individuals sought their ways to live with COVID-19.

If the business wants to revive, they need to distinguish between areas where the demand is going to return, and areas where it is not, and identify areas which is going to see a surge in new demand because of the structural change. There is undoubtedly a lot of risk in the current situation but there seems to be business opportunities for entrepreneurs as well.