Comparing Japan with US and Sweden

Income inequality has been rising in the recent years in almost all of the developed countries. However, there are considerable differences in the level of inequality among the countries. Why are there such differences? How have they developed?

In order to answer these questions, Japan will be compared with the United States (US) and Sweden. The two countries have been chosen because, as Figure 1 shows, US is one of the countries with high inequality in terms of Gini coefficient for the market income (i.e., before tax and transfer) and Sweden one with low inequality. 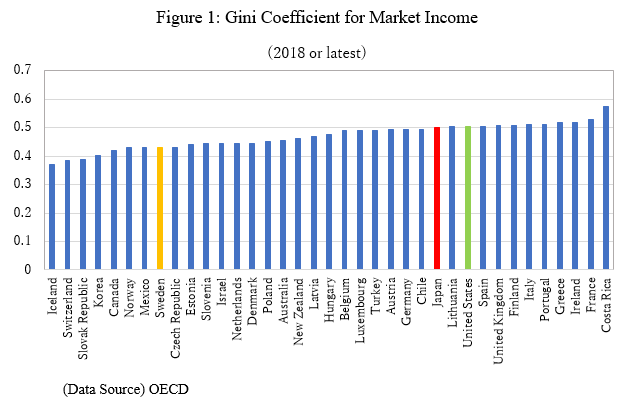 In order to look into the factors behind the differences in inequality among the three countries, the locations and the shifts of their Lorenz curves, which are at the background of Gini coefficients, will be explored. Since sufficient information is not available from the OECD database, the data used is the following discussion is taken from the World Inequality Database (WID), which is maintained by Professor Thomas Piketty and other co-directors*.

*More specifically, data on income shares of the 10 income deciles is used. It should be noted that the data used is based on pre-tax national income per adult basis, obtained by equally splitting household income to the adult household members: it is not based on equivalized income, which distributes income to all members of households (including children) on an equivalized scale. It is different, therefore, from the data provided by the OECD which is used in Figure1.

Comparing Quasi-Lorenz curves and how they have shifted

Quasi-Lorenz curves (it is called this way to show that it is not based on the full information about individuals) obtained from the WID’s information on income shares of income deciles (ten equal groups of adults with low to high income) is shown on Figure 2. They are for the years 1980 and 2017 (because they are the first and the last years of the period for which the data is available for Japan). 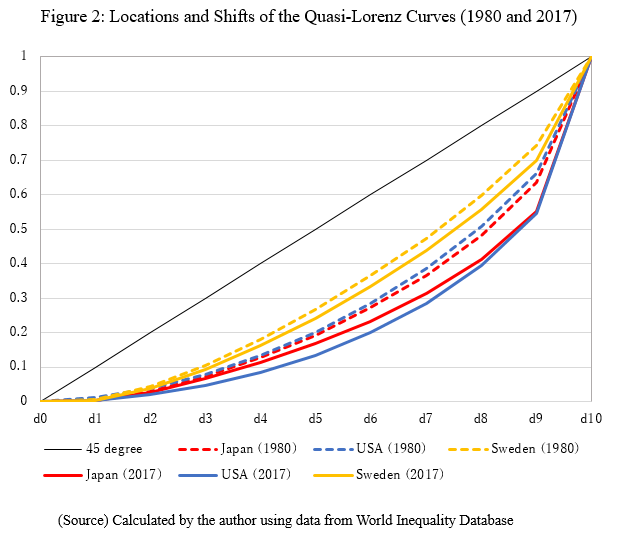 The locations of the quasi-Lorenz curves of the three countries are consistent with the ordering of inequality shown in Figure1: in 2017, the quasi-Lorenz curve for Sweden, which was the country with least inequality, is located closer to the 45 degrees line than those of the US and Japan. The curves for the latter two countries are very close, but the Japan’s is closer to the 45 degrees line than that for the US, especially in the lower income groups.

It is interesting to see that, in 1980, not only Sweden’s inequality was lower than Japan, but US’ inequality was also lower than Japan’s. (On the other hand, the relationship between Sweden and US cannot be determined decisively because the quasi-Lorenz curves of the two countries happened to intersect with each other.)

Figure 2 also shows that inequality in the three countries increased between 1980 and 2017. However, Sweden’s increase was limited so that, even in 2017, its quasi-Lorenz curve showed inequality which was much less than those in other two countries. At the same time, the rise in inequality was larger in US than in Japan so that the ordering of inequality was reversed: in 2017, US came to have a larger inequality than Japan.

The factors behind the increases in inequality can be found in Figure 3 which shows the signs and the magnitude of the changes taking place in the income share of the income deciles during the period 1980-2017. 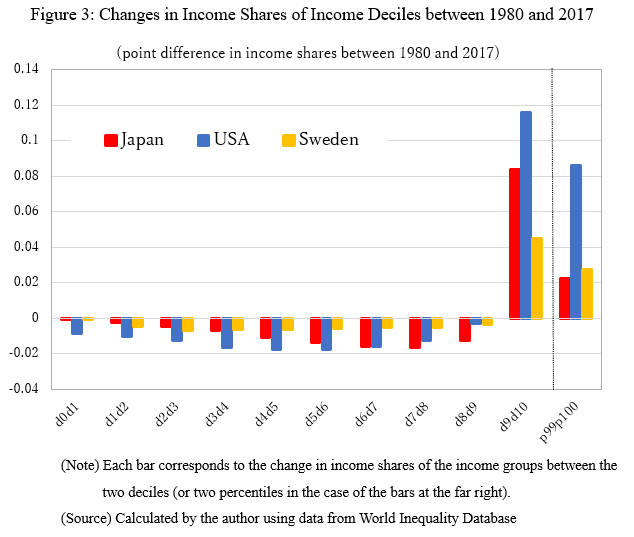 First, inequality rose in all three countries because, in these countries, income shares of the lower 9 income deciles fell and only that of the top decile increased.

Second, among the lower 9 income deciles, it was the middle-income groups that saw the largest decline. It suggests that bipolarization of income is taking place in the three countries.

Third, the decline in the lower income groups and the increase in higher income groups in the US was much more significant than those in Sweden and Japan. The steeper concentration of the income to the top income earners has led the US to see a larger increase in inequality in US than in Japan.

Understanding the differences in the trends of inequality

We have seen how income inequality has risen in the three countries. Finally, we will see when and how inequality changed over the period.

Figure 4 shows the annual changes of the quasi-Gini coefficients for the three countries during the period. It shows that, in all countries, the collapse of the bubble economy reduces inequality but, other than that, the countries are different, particularly in terms of their long-term trends. 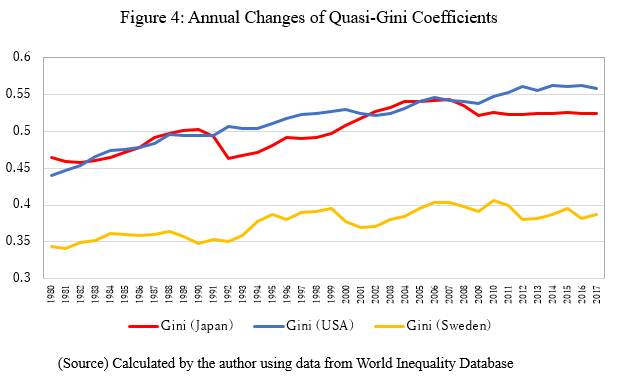 In US, except for a modest decline during the period following the collapse of the IT bubble (early 2000s) and the collapse of the housing market bubble which eventually led to the subprime mortgage problem and the great financial and economic crisis (late 2000s), inequality increased in a sustained manner.

In the case of Sweden, there was a decline in the early 1990s because of the collapse of the bubble and the financial crisis to follow, and another decline in early 2000s when the IT bubble collapsed. However, since mid-2000s, it has shown a levelling-off of inequality.

However, since early 2010s, which was the period when Abenomics was pursued, inequality has not increase (nor decreased). It was the case even when the economy was in an expansionary phase. It is against the general perception that inequality increased during the Abenomics period.

It is important to note that these differences across countries do not have anything to do with income redistribution because the Gini coefficients in Figure 4 were in market income basis (i.e., before tax and transfer).

How we can explain these differences from the economic system and the economic performance of the three countries? This remains an interesting and important subject for future research.