How has COVID-19 Affected Changes in Population

The population in Japan has been declining since its peak in 2008. According to the latest estimate, the total population of Japan in October 1, 2020, was 125.88 million, a decline from same month previous year by 0.23 percent. The decline is mainly due to the negative natural change of population (number of live births minus number of deaths) that reflects the low total fertility rate that is still round 1.4.

In the recent years, however, the fall in population has been mitigated somewhat by the positive contribution made by international migration (number of entries to Japan minus number of exits from Japan). Since 2013, net international migration has been positive and also continued to increase so that more than 40 percent of the decline in population due to the negative natural change in 2019 was offset by net inflow from abroad. It reflects the rapid increase in foreign workers coming to Japan.

International migration is shrinking in both entries and exits

The situation seems to be changing under the spread of the COVID-19. Hesitation to go abroad as well as the close down of borders by the governments have discouraged both entries to and exits from Japan as Figure 1 shows. 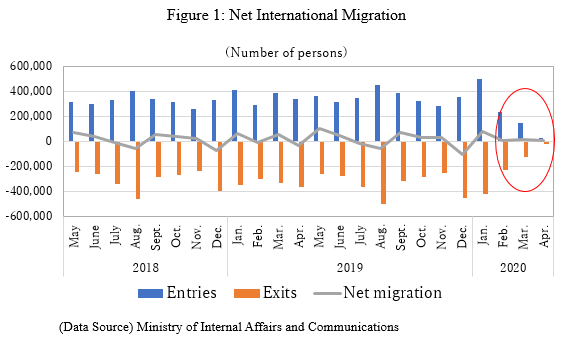 The migration we have just seen is the international migration to and from Japan. It does not reflect the regional migration which takes place within Japan and which adds up to nil for the country as a whole. If we examine migration among the prefectures, we can see that a significant change is taking place as well.

Until 2019, there was a continued inflow of population to the Tokyo metropolitan area and a continued outflow from almost all other prefectures. That was also the case for September 2019 as is shown in Figure 2. 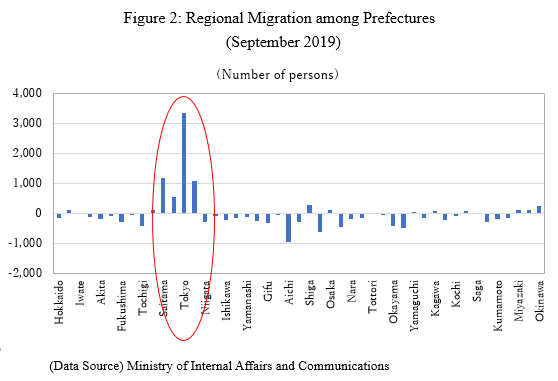 It reflects the attractiveness of the metropolitan area which provides not only opportunities to work but also to study and to enjoy. As Figure 3 shows, it was mainly the young people in their twenties that moved into Tokyo. The older age group members who themselves might have come to the area in their twenties seem to have decided to stay: As Figure 3 shows, there is only a limited number of exits until they get close to their retirement age. 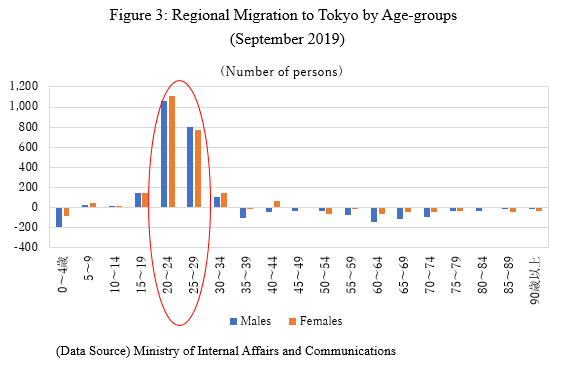 Older generation is now going out from Tokyo

The situation seemed to have changed under COVID-19. As Figure 4 on reginal migration for September 2020 shows, people are now moving out of Tokyo. Since there is an increase in inflow to other prefectures in the metropolitan area, they may be the destination of the outflow from Tokyo. Whatever the case may be, it is a significant change to see an outflow from Tokyo which have consistently been attracting population. 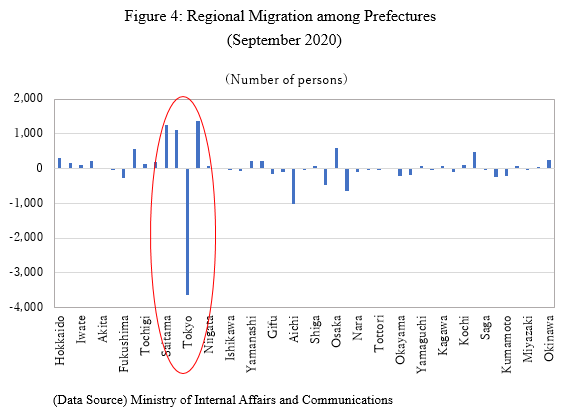 Those which decided to move out from Tokyo seemed to be the prime-aged workers as can be confirmed by Figure 5. They may have decided to move out because of the change in workstyle under COVID-19: The shift to tele-working that freed workers from commuting seems to have made them choose a larger house and a better living environment. 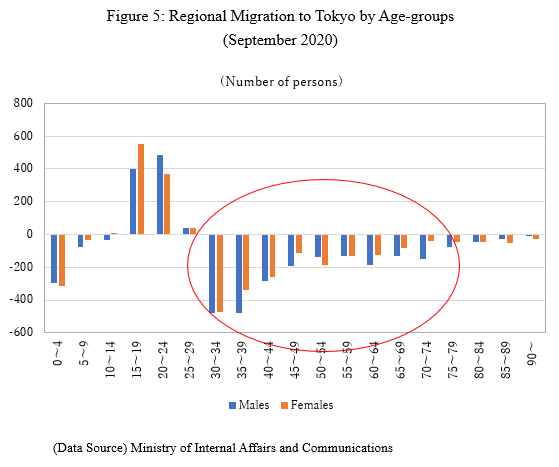 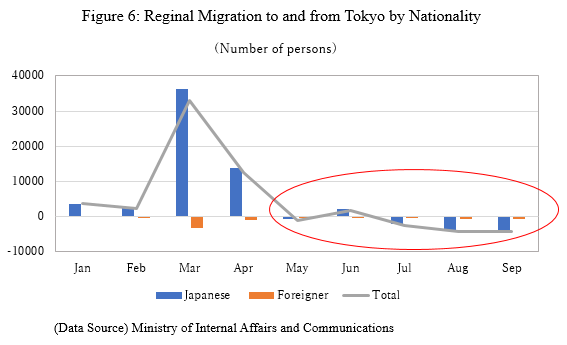 Before concluding, it is important to note that natural change in population may also be affected by COVID-19. Such a sign can be seen in the recent number of pregnancies reported to the government. According to Figure 7, the number of reported pregnancies has fallen significantly since May. 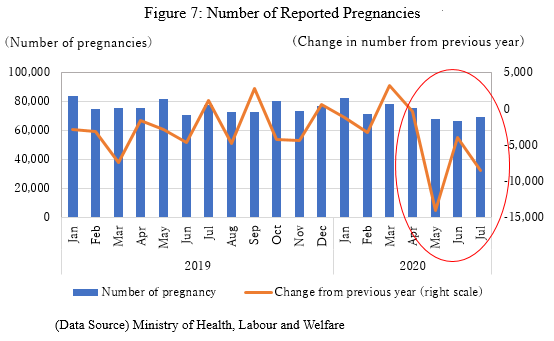 The decline in number of reported pregnancies may only be a result of late reporting because the parents decided to stay indoors under the declaration of the state of emergency. If that is the case, it would not be a leading indicator of an actual decline in number of births. However, if it is the result of the decision made by the parents to postpone having children because of the uncertainty surrounding the future of COVID-19, it would mean that birth rate will eventually fall.

We need to keep an eye on the impact of COVID-19 on birth rate as well as on regional migration.