How well is Quantitative and Qualitative Monetary Easing doing?

The Bank of Japan (BOJ) under the new Governor Kuroda and his deputies, who assumed their posts in March 20, overhauled the Japanese monetary policy in a drastic manner and shifted it into a new regime.

The quantitative and qualitative monetary easing (QQE), announced in April 4, brought a major change to the monetary policy framework by (i) introducing inflation targeting framework, which aims to achieve 2 percent increase in CPI within the range of 2 years; and by (ii) shifting the operating target for money market operation from uncollateralized overnight call rate to monetary base, which was to be doubled in two years (increase by 60~70 trillion yen per annum).

In order to achieve the new target, it was also decided that (iii) Japanese government bonds (JGB) holdings would be doubled in two years (increase by 50 trillion yen per annum) , and the average period to maturity of JGB purchase should be extended from less than three years to about seven years; and that (iv) ETF and J-REIT would be purchased so that BOJ’s holding of these assets would increase by 1 trillion yen and 30 billion yen per annum, respectively; while (v) maintaining the previous decision to purchase commercial papers and corporate bonds to reach 2.2 trillion yen and 3.2 trillion yen, respectively, by the end of 2013, and maintain the level of stocks thereafter.

They are somewhat similar to the quantitative easing policy (QEP) that was employed by the BOJ between March 2001 and March 2006. It is no surprise because QEP was a pioneer to the unconventional monetary policies that were introduced after the Lehman Brothers Shock by many central banks including the BOJ. However, QEP was different from QQE in the following respects: (i) QEP did not adopt inflationary targeting framework; (ii) QEP employed outstanding balance of the current accounts at the BOJ as the operating target; and (iii) QEP was implemented under a system where the current accounts at the BOJ received no interests, so that ample liquidity poured into the money market and pushed-down the short-term rate to zero.

Transmission Mechanism of the QQE

According to the speech made by Governor Kuroda in April, the expected impacts of the QQE are threefold.

First, asset purchases are expected to lower the interest rates including those in the longer-end (interest rate channel).

Second, purchase of JGBs by a significant amount is expected to increase bank lending, and also to increase investments in shares and other risk assets (portfolio rebalancing channel).

Third, the commitment to achieve the inflation target and to pursue aggressive monetary easing for that purpose is expected to bring an end to deflationary expectations (expectations channel).

Through these channels, the QQE was expected to stimulate activities of the firms and the households, and contribute in achieving the inflation target.

With respect of the interest rate channel, QQE had the expected impact before and immediately after the introduction of a new framework.

Since Mr. Abe became the Prime Minister, it became increasingly clear that he will appoint someone who will introduce aggressive monetary easing as the Governor of BOJ. Therefore, even before the day of the first Monetary Policy Meeting under Governor Kuroda on April 4, the market had incorporated significant monetary easing in the level of interest rate. To the surprise of many, the interest rate fell further as they found out that the decision by the Meeting exceeded markets’ expectation. As a result, Figure 1 shows that long-term interest rate fell by almost 40 basis points between the peak in early January 2013 and April 4. 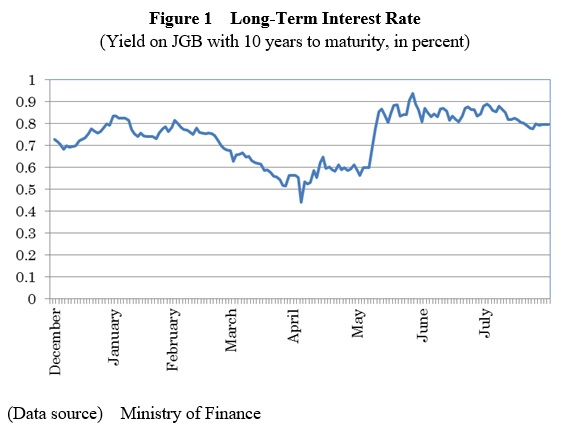 However, interest rates started to rise thereafter. Especially in May when Fed’s Chairman signaled the possibility of beginning tapering off asset purchase program from late year which ignited a rise in interest rates in the U.S. At the peak, long-term interest rate rose to above 0.9 percent. The market later calmed down as the Chairman Bernanke returned to a more cautious position, but interest rates still stand at a level similar to that in early January.

The experience confirms that interest rates are not determined solely by domestic factors but are also vulnerable to external shocks. It is therefore important that additional measures be implemented to offset the influence of external shocks in order to lock-in the gains of the new policy.

The QQE has so far been successful in encouraging a change in expectation of the agents.

The market responded by a bullish rise in share prices and lower exchange rates. While they also felt the influence of the external shock in May, they have not given up all of the gains made until then so that currently the share prices are much higher and exchange rates much weaker than in January. The break-even inflation rate calculated from inflation-indexed bonds also remains at above 1 percent even after the fall in May.

Expectations by households also seem to have improved. Consumer confidence has strengthened since early this year. More consumers are also expecting price rise in the following twelve months.

Private consumption has increased steadily even though increase in employment and wages remained modest. Since shares and mutual funds held by households are limited, it could be regarded as a result of more optimistic outlook perceived by the households rather than of wealth effects. In this respect it is important to support the optimistic outlook by policy efforts to improve employment and wage situation, growth strategy in particular, since private consumption growth would otherwise be unsustainable. 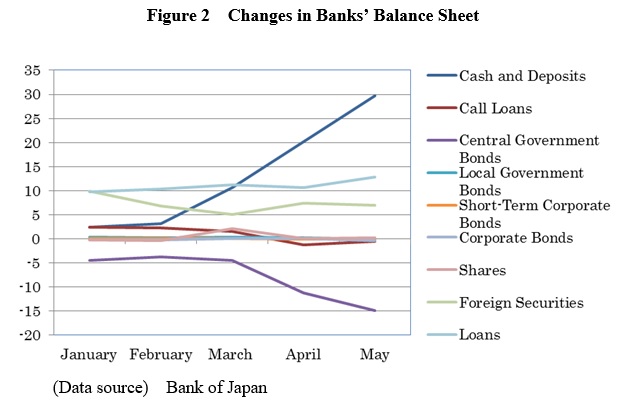 Figure 2 shows that the reduction in JGB holdings by the banks has been hastened since April. In May, JGB holdings are 15 trillion yen less than a year ago. It should have contributed in reducing the interest rate risk that the banks carried until recently, and strengthened “the bow for the three arrows” (IMF). On the other hand, the trend in bank lending does not seem to have changed since the start of the QQE. It continues to increase at a modest rate witnessed in early 2012, whose main borrowers include individuals and local governments. As a result, the main counterpart of the reduction of JGBs has been the increase in the outstanding balance of the current accounts at the BOJ. Compared to a year ago it is increasing by 30 trillion yen in May. It shows that portfolio balancing hasn’t taken place in the banks’ balance sheet.

Even if the portfolio rebalancing channel doesn’t work through banks, it can still work if the BOJ purchase assets directly from the market. However, since the amount of JGBs purchased by the BOJ and the amount of fall in JGB stocks of banks are almost equivalent, it can be assumed that JGBs has so far been purchased mostly from banks and much less from outside the banks. If that is true, it implies that there is no possibility of portfolio rebalancing taking place outside the banks as well.

In order to stimulate portfolio rebalancing effect, the BOJ may need to purchase more assets directly from the market rather than from the banks. Moreover, in purchasing more assets from the agents other than the banks, the Bank of Japan should purchase more private debts other than the JGBs. That is because agents other than banks do not hold so much of JGBs in their portfolio. It may be recalled that the amount of purchase of CPs and corporate bonds was not changed when BOJ introduced QQE ((v) in the third paragraph). A time may come when it would have to be added to the toolbox.

To Strengthen the Effectiveness of the QQE

We have examined the progress that the QQE had made, and discussed monetary policy measures that could be taken to strengthen their impacts. However, that may still not be enough to achieve the expected impact on the economy. Even if interest rates fall and assets prices rise, it may not necessarily activate real economic activity. The firms may stay cautious in investing because of the lack of domestic business opportunities in the longer-term. The households may return to more cautious spending attitude because of the uncertainty in future income opportunities as well as the lack of confidence in the sustainability of the social security system.

It implies that the QQE is only a necessary condition for activating real economy and not a sufficient one, at least in the current Japanese context. It has to be complemented by a credible growth strategy that would persuade that the Japanese economic system has changed, and provide brighter growth prospects (I have already discussed the essentials of a credible growth strategy in my column in June “Waiting eagerly for the Growth Strategy”). Confirming the complementarity of the measures brings us back to the basics of the “three arrows” strategy. Arrows can only prove to be strong if combined than left on its own.