Implications of Abenomics for Asia

Japanese economy has developed a close and interdependent relationship with Asia. Not only because Japan locates within Asia, but also because Asia is the growth center of the world, the relationship between Asia and Japan is expected to become even stronger.

This month’s column discusses the future of the relationship between Asia and Japan in the context of Abenomics: What are the implications of Abenomics on Asia. It is based, on a part of my special presentation “Abenomics in Action: its implications for Asia,” made at the Institute of International Finance (IIF) Asian Summit 2015, held in May 7, 2015, in Jakarta, Indonesia.

In terms of goods and services trade with Asia, we would expect Japan to be a big market for Asian products. It would certainly be so when Japan emerges out of deflation and regained growth momentum.

However, we also know that monetary easing in a country with flexible exchange rate regime would lead to depreciation of the exchange rate. Depreciation, in turn, would mean a negative impact, or a beggar-thy-neighbor effect, on its trade partners. Does this mean that Asian countries, in the short-run, would have to tolerate the negative impact coming from the bold monetary policy (i.e. monetary easing under Qualitative and Quantitative Easing) which consists one of the three arrows of Abenomics?

As a matter of fact, Abenomics has been proceeding in a way which minimizes such negative impact on Asia.

It is true that depreciation has taken place since the introduction of Abenomics. In nominal effective exchange rate-terms, yen has depreciated by more than 20 percent by early 2015. It has greatly helped the firms to increase their profits to a record high level. However, it has been achieved without any increase in export volumes. As Figure 1 shows, export volumes to Asia (and to the world as well) remained flat, or even declined somewhat during the period. 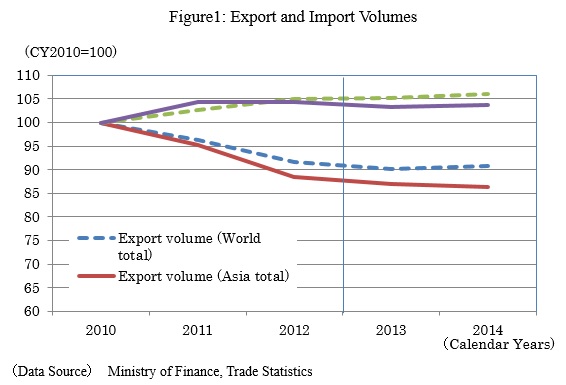 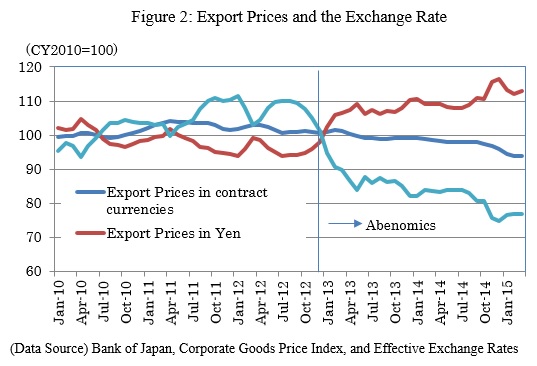 Then, how about capital transactions? In particular, what is happening to the foreign direct investment (FDI) which has grown rapidly in the past because of the rapid appreciation of the yen and the need to establish production site abroad to enjoy low production costs.

Figure 3 shows that the trend of increase in FDI from Japan to Asia is still continuing, even under depreciation. It suggests that firms are looking at the FDI to Asia from a long-term point of view. Probably because of the decline in population in Japan, the firms are investing in Asia, not only because of the low production cost, but also because of the expanding domestic markets in Asia. According to the “FY2014 Survey Report on Overseas Business Operations by Japanese Manufacturing Companies” published by the Japan Bank for International Cooperation (JBIC), India, Indonesia, and China are the three most favorite destinations for Japanese FDIs. 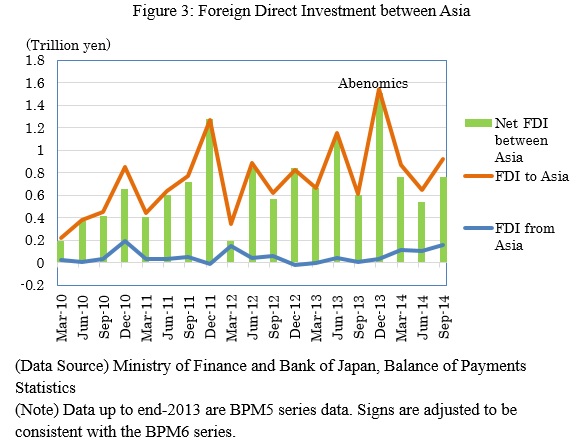 In addition, as Figure 4 shows, portfolio investment from Japan to Asia is showing signs of stronger growth in the past year. In pursuit of higher yield, Japanese investors are shifting larger share of their portfolios to Asia. Such investors include public investors such as the Government Pension Investment Fund (GPIF), and private investors such as the life insurance companies. The promising areas for investment include financial and other non-manufacturing sectors as well as infrastructure projects. 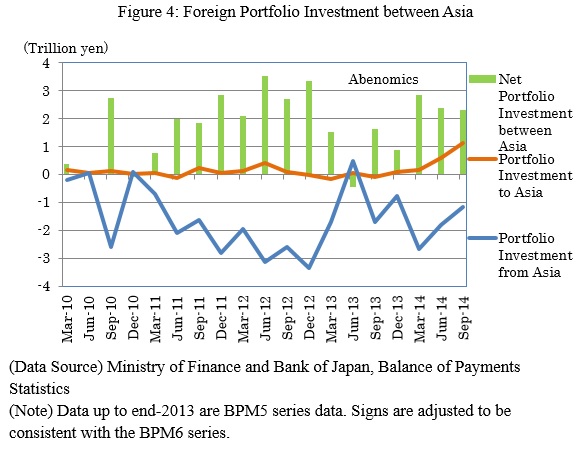 Finally, it should be added that Japan itself would be an attractive place to invest for Asian investors. It should certainly be the case when Japanese economy successfully revives. In order to support such a kind of investment, the government is implementing growth strategy measures to facilitate inward FDIs, attract qualified professionals, and reduce corporate tax rate.

Moreover, in the long-term, it seems that an increase in foreign investment from Asia to Japan is almost inevitable. That is because Japan’s household savings rate is rapidly falling, mainly as a result of the aging of the population (Figure 5). It has turned negative in FY2013 for the first time, at least, in 60 years; the period for which a relatively reliable estimate of the rate is available. 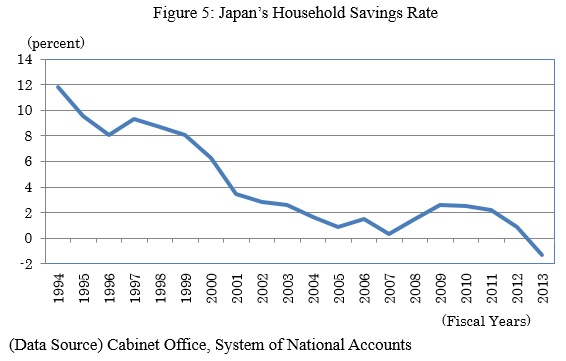 Fall in household savings rate, in turn, has led to a current account surplus that is almost vanishing (Figure 6). The financial account even turned to a net inflow in CY2013. There are private sector forecasts which expect that the general pattern of Japan’s current account balance will turn deficit by 2020. 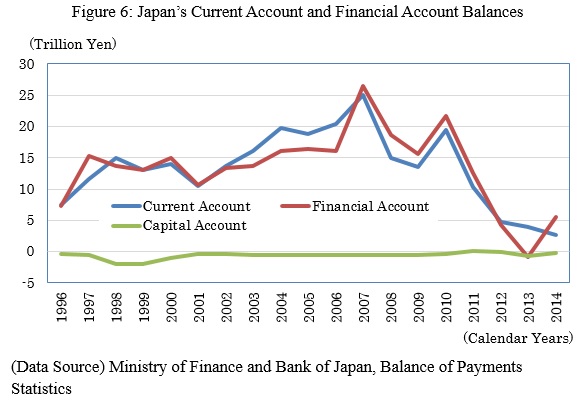 It means that Japanese economy will have to depend more on foreign savings to support the economy. It should provide a great opportunity for Asian investors.