Is Victory Over Deflation in Sight?

A look at the recent developments of the CPI shows that prices are gradually turning to an upward trend. 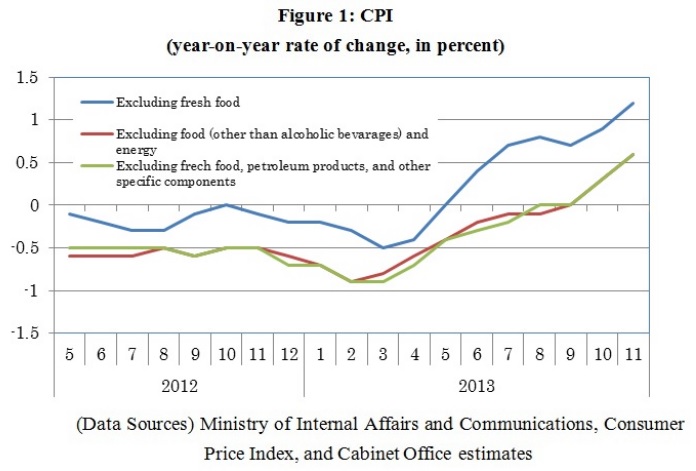 Do these observations mean that deflation, which has haunted the Japanese economy for nearly two decades, is about to be over? Will we be able to declare victory over deflation in the near future? This is going to be the topic of my first column in 2014.

Definition of the “end of deflation”

To start with, let us reconfirm the definition of deflation. Deflation is a situation where prices are constantly falling. Therefore, if the deflation has ended, prices should be either flat or constantly rising. However, it should be taken into account the fact that CPI has an upward bias. Also, it is important to make sure that there is no more danger of going back to deflation within a reasonable period of time. These considerations lead us to define end of deflation as a situation where prices are constantly rising, or where inflation is taking place. (Needless to say, we would like to rule out high rates of inflation. If we are to make this point clear, we should say the end of deflation means achieving a mild inflation.)

Three sets of indicators to judge the “end of deflation”

Whether the prices have constantly risen can be easily judged after witnessing that prices have actually risen for some length of time. However, such ex-post approach is not useful from the point of view of timely economic policies. From policies’ point of view, it is important to judge the situation in a reasonably short period of time. For this kind of ex-ante approach to be workable, it is not enough just to watch the developments in the CPI: It is necessary to examine other indicators to see whether necessary conditions have been met for the prices to rise constantly. 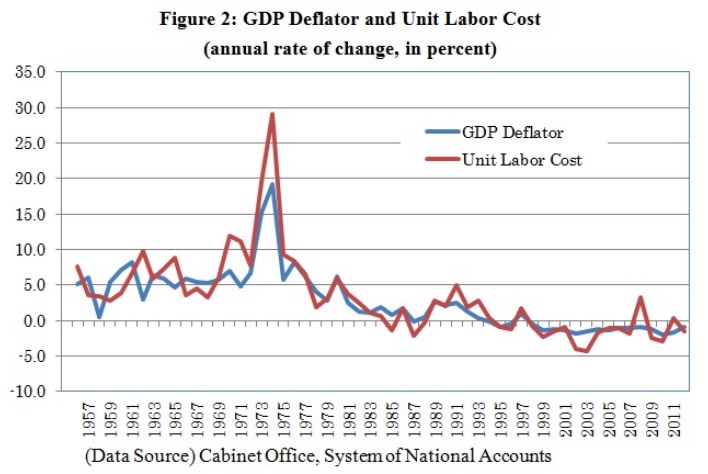 If you look at the y-o-y changes of GDP deflator in the first three quarters of 2013, although their magnitudes are gradually getting smaller, they are still negative (-1.1 percent, -0.5 percent, and -0.3 percent, respectively). A couple or more quarters will still be necessary before we can say that they have turned positive and stayed that way for an enough length of time. More concretely, it means that we still need to look at the last quarter of 2013 (preliminary numbers to be published this February) and the first quarter of 2014 (preliminary numbers to be published this May), at least, before we can say that deflation is over.

While positive changes of GDP deflator indicate that the prices are rising due to domestic reasons, it is sometimes difficult to judge whether prices are for a continuous rise only by looking at the GDP deflator. The developments in unit labor cost may be useful in this regard. Unit labor cost is the changes in nominal wages (i.e. nominal compensation of employees) adjusted for the changes in units of production of final goods and services (i.e. real GDP). If it is positive, it implies that labor costs are rising. It can be assumed that, under such situation, private consumption is encouraged, and so is domestic demand, so that an environment for a constant rise in prices is in place.

In the recent quarters they have been unstable, and it is still negative in the most recent period. It shows that, as was the case with the GDP deflator, a number of quarters are still necessary before we are able to safely say that unit labor cost is on an increasing trend.

Second set of indicators includes GDP gap. Macroeconomic demand and supply conditions can be seen by the gap between potential GDP and actual GDP, or the GDP gap (or output gap). As shown on Figure 3.

Figure 3 shows that it was positive until early 1990s when it turned negative. It shows that for the deflation to be over, GDP gap needs to be positive. Since the timing of the turnaround is somewhat before the timing of the turnaround of prices, it also suggests that GDP gap influences prices with a lag. It implies that GDP has to turn positive before deflation is over. 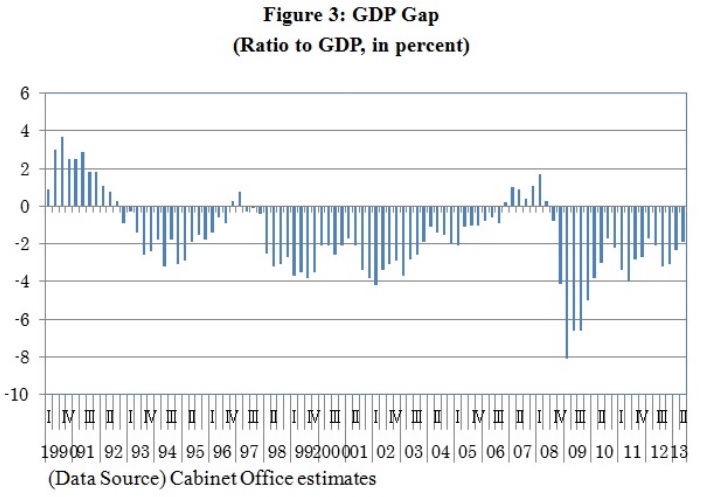 While GDP gap has narrowed from the peak of 8 percent of GDP (first quarter of 2009), the current level of 1.6 percent (at the third quarter of 2013) still requires some time to turn positive. This fact also seems to suggest that it will still take some time for the deflation to end.

Even if we assume that the GDP growth rate of more than 2 percent will be achieved in the four quarters after the third quarter of 2013, under an additional assumption of potential growth rate being about 0.5 percent, it will only be enough to fill the existing negative GDP gap to zero. If the time required for the GDP to turn positive, and also the time necessary for the GDP gap to influence prices, are taken into account, it may well take more than a year to be certain of the end of deflation.

Unfortunately, there is not a good indicator which directly shows the expected inflation rate of the economic agents. In Figure 4, the response to the question asking the future price in the Consumer Confidence Survey is depicted. It shows that the share of households that responded that the prices will rise in the coming twelve months has increased since end-2012. It seems to suggest that expected inflation rate is shifting towards the right direction. On the other hand, not much information about the timing of the end of inflation can be extracted from this figure. 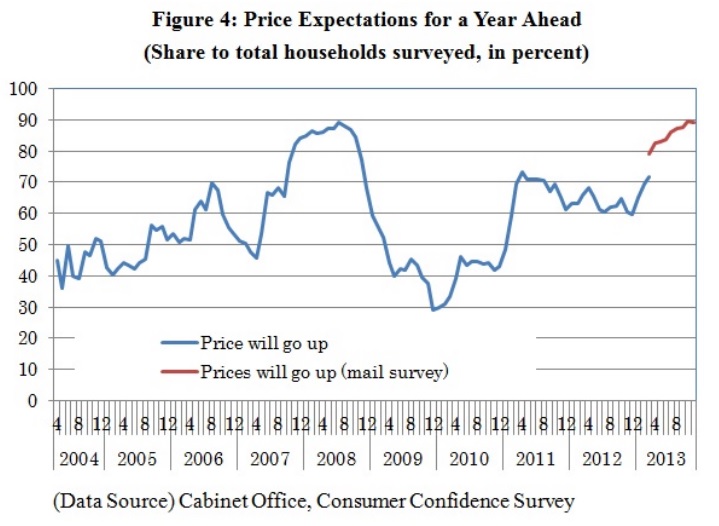 Third set of indicators includes money stock. The end of deflation and a shift to a mild inflation needs to be accommodated by an appropriate monetary condition. In particular, money stock needs to be ample enough to accommodate both real GDP growth and price increase.

Figure 5, which depicts the developments of money stock relative to real GDP, shows a relatively high growth until deflation started in mid-1990s: Since then, it has sometime become flat, or even negative. There are signs of gradual rise in growth after the Lehman Brothers shock. It suggests that monetary easing needs to be maintained, or even strengthened, in order to supply money stock sufficiently enough to bring an end to deflation. 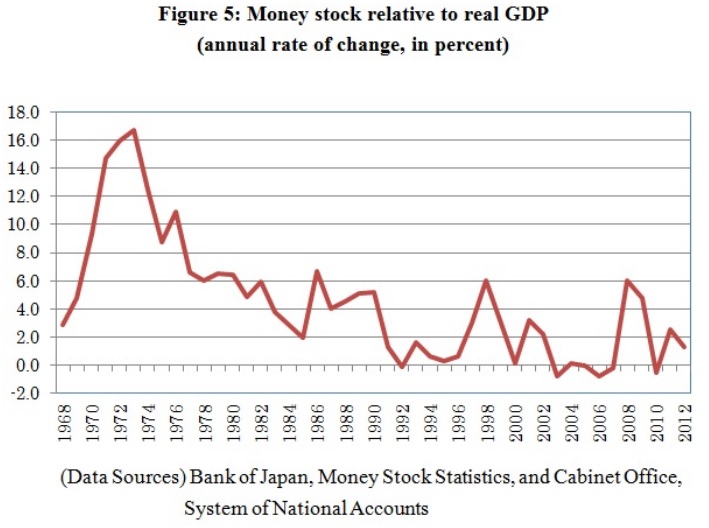 From the point of view of overcoming deflation, recent developments of the indicators show that the situation is moving towards the right direction. However, it does not mean that the end of deflation is near. While the trend of the CPI shows signs of turning positive, there is still a long way left for other auxiliary indicators to meet the requirements for an end of deflation. They suggest that a couple or more quarters, at least, are necessary before we can declare victory over deflation.