Japanese Economy as seen from a Quantity Rationing Model

Prices and wages that seem to be rigid

In spite of the introduction of an inflation target of 2 percent, and an aggressive monetary easing to achieve the target, prices in Japan have been slow to respond. At the background is the sluggish wage performance: the fall in the unemployment rate to below 3 percent which was perceived to be a full-employment rate apparently has not provided enough pressure for the wages to rise.

These observations give an impression that prices and wages are not playing their role in the Japanese markets. If they are not flexible, the markets will fail to clear, and demand and supply would not match.

Suppose that the prices and wages are actually rigid so that markets do not clear. What will happen in this kind of an economy?

Let me elaborate a little bit on the quantity rationing model. Suppose there are two markets; goods and labor markets. If prices and wages are rigid in their markets, demand and supply would never clear (unless by chance). In such a situation, transactions would satisfy only whichever is shorter (e.g. supply, if supply < demand), and whichever is longer (e.g. demand, if supply< demand) would be subject to quantity rationing. It means that the whichever is longer would find some part of it not being satisfied. If quantity rationing takes place, it is natural to think that the agent subject to rationing would alter its demand or supply in the other market.

Based on such an understanding, we are able to classify the situation in an economy into four regimes, reflecting which of the demand and supply is subject to quantity rationing (Figure 1). (The following is based on Muellbauer and Portes, 1979).

“Classical unemployment” refers to a regime where households’ labor supply is exceeding firms’ labor demand, so that households are subject to quantity rationing in the labor market (i.e. there is unemployment). At the same time, households’ goods demand is exceeding firms’ product supply so that households are also subject to quantity rationing in the goods market. Such a situation could arise when real wages are too high so that firms cannot increase employment, and as a result, firms cannot supply goods enough to satisfy households’ goods demand.

“Underconsumption” refers to a regime where firms’ labor demand is exceeding households’ labor supply so that the firms are rationed in the labor market (i.e. there is labor shortage). In addition, firms are also rationed in the goods market because their goods supply is exceeding households’ goods demand. This corresponds to a situation where real wages are so low that households are unwilling to supply labor, and, at the same time, unable to increase their demand for goods.

Understanding the Japanese economy by the model

Which of the four regimes does the Japanese economy belong to?

Because we observe labor shortage, there should be an excessive demand in the labor market and firms are rationed as a result. Therefore, Japanese economy should be either in “underconsumption” or “repressed inflation.”

It seems more realistic to think that firms are in excessive supply: they wish to find more customers, especially in households, for their goods. If this is true, the Japanese economy should be in “underconsumption” regime. 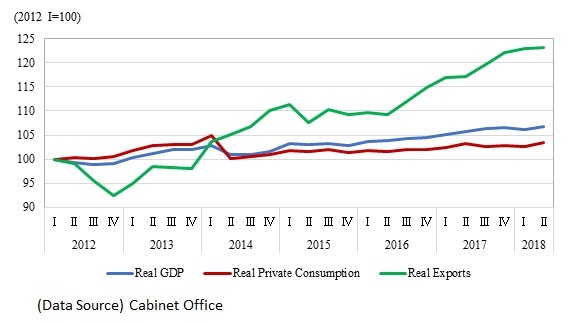 In other words, although it might seem that there is an excess demand in the goods market, it is not the situation for the households: They are facing excess supply in (consumer) goods market.

What is the policy implication of identifying the current situation of the Japanese economy as “underconsumption”?

First, it would mean that encouraging wage increase is the most important mean to overcome the current situation.

“Underconsumption,” as we have already seen, is a result of real wages being too low. Therefore, if we raise real wages, labor supply would increase while labor demand would reduce, so that labor shortage will be resolved. In addition, if real wages increase, households’ goods demand should increase, thereby resolving excess supply in the goods market as well.

In order to achieve increase in real wages, policies should give more priority to structural policies in the labor market area.

Second, it would mean that expansionary macroeconomic policies should be used in a careful manner.

Expansionary macroeconomic policies are important as tools to encourage increase in real wages. It would show their maximum effect when they are accompanied by structural policies as mentioned above. If, to the contrary, they are not accompanied by structural policies, expansionary macroeconomic policies would only end up exaggerating the excess demand for labor: they may not succeed in shifting the economy to a more desirable equilibrium despite the use of valuable resources.

Usefulness of the model

Needless to say, prices and wages are not determined exogenously as the quantity rationing model assumes. They should, in the long-run, reflect the demand and supply situation of the markets, and adjust to clear the markets.

However, if prices and wages take time to change and seem almost rigid, we should be able to make use of a quantity rationing model to analyze the economic situation in the short-run as a first order approximation.

It is in this sense that I think it useful to analyze the current situation and think about the policy recommendation using the model.

Japan’s current account balance with China: Is there a change in trend?

Why does employment lag behind business cycles in Japan?

An Implication of an Unsynchronized Global Recovery under COVID-19