Japan’s current account balance with China: Is there a change in trend?

Japanese firms, since the mid-1980s when the steep appreciation of the yen started, have invested heavily in Asia to establish global supply chains in the region. At the focal point of the chains was China: China became one of the main trading partners for Japan, together with the United States, over the period.

In order to understand the economic relationship between China and Japan, it is meaningful to make use of the Japan-China bilateral current account balance. Bilateral current account balance has been a source of trade frictions in the past: it was the case when Japan and US were involved in trade friction, and it was the case when US and China engaged in trade war. It is clear that we should not use it as a way to judge the appropriateness of the trade policies of the two countries. At the same time, however, it cannot be denied that it is an important source of information in understanding the economic relationship between the two countries.

According to Figure 1, Japan’s current account balance with China had been in deficit until early 2010s, except for the years between 2008 and 2011. 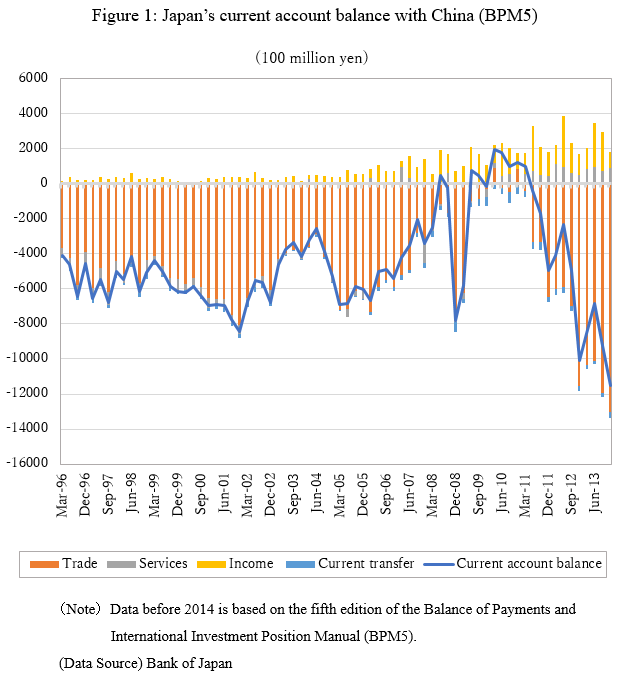 However, the situation changed in 2017. According to Figure 2, Japan’s current account balance has turned to surplus since then. 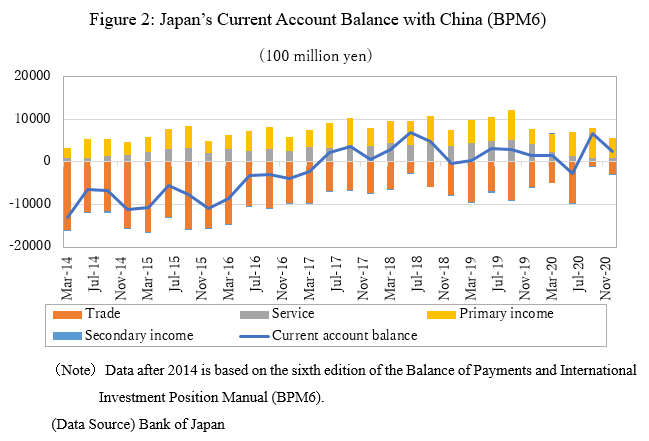 What does this change mean? Does it mean a change in trend, or is it a temporary phenomenon? If it is a change in trend, what is at the background of the change? Does it have something to do with US-China decoupling or changes in global supply chains? These are the questions that this month’s column intends to answer.

Reasons for the surplus after 2017 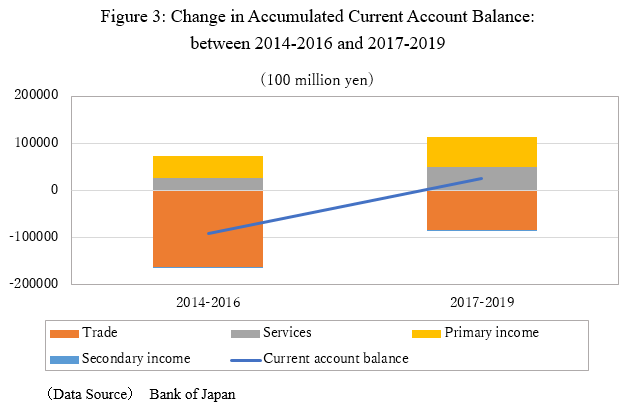 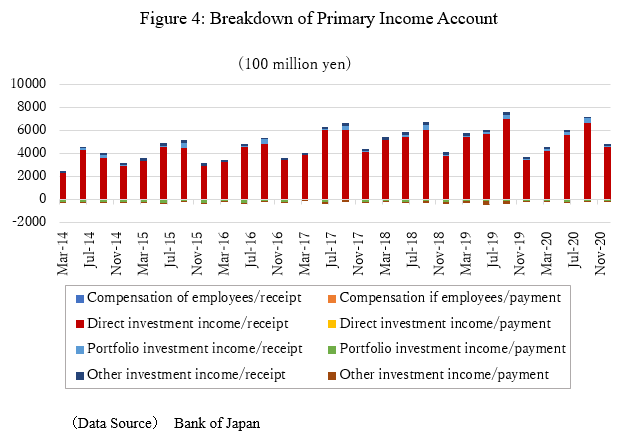 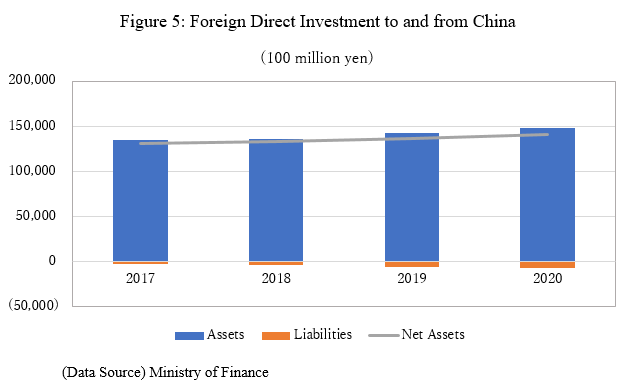 Second, surplus in services account has increased (it explains about 19 percent of the change in current account balance over the period). As Figure 6 shows, the increase in services account surplus over the period is due to the increase in surplus in the travel account. Needless to say, this increase reflected the significant growth of inbound tourists form China and their enormous purchasing power. Please note, at the same time, that the surplus in travel account shrank significantly in 2020 due to COVID-19 and the measures to counter the pandemic. 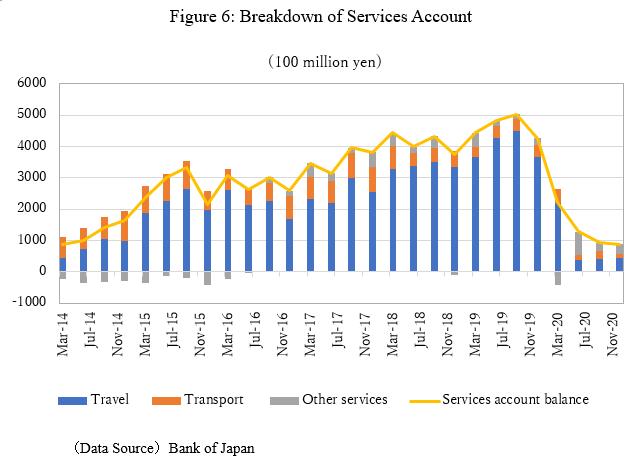 To see what the contributing factors are for the reduction in trade deficit, please refer to Figure 7 where the change in the balance is disaggregated into changes in exports and imports. It shows that the change in trade balance basically comes from increase in Japan’s exports to China: Japan’s imports from China has remained almost unchanged. 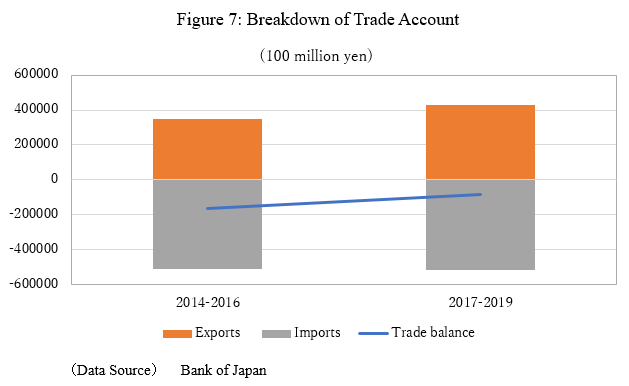 Reasons for the decline in Japan’s trade deficit with China 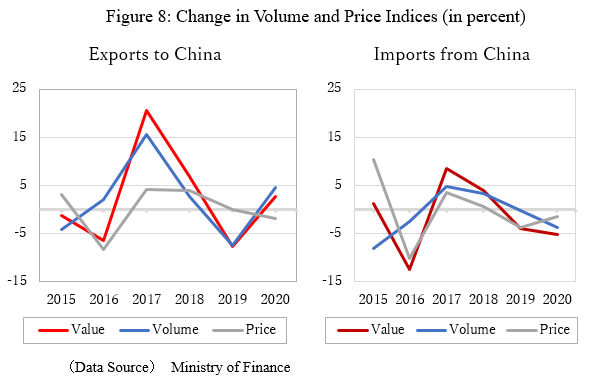 According to the figure, generally speaking, the influence of volume changes rather than price changes has been larger. It is not to deny that there has been exceptions: price changes seem to have had a large impact on exports and imports, for instance, in 2015 and 2016. In 2015, renminbi showed a depreciation against yen, and, in 2016, there was a large drop in oil prices.

As for the changes in volume of exports and imports, it should reflect the real GDP growth rates of the two countries. China has been recording relatively higher real GDP growth rates for quite a long time. During 2014-2019, the average growth rate for China was about 7 percent while for Japan it was 1 percent. Therefore, it is no surprise that the growth of exports to China was more than the growth of imports to Japan. However, considering the fact that Japan exported less to China than imports from China, and that the trade deficit has halved over the period, there seems to be more than just an income effect at work.

The global supply chains established between Japan and China should have had the following impact on Japanese trade. (a) Japan’s exports to China and to other countries are replaced by production in China and exports from China. (b) Instead of exporting final goods to China, exports of intermediate goods for production in China increased. (c) Japan’s imports of final goods produced in China increased. Japan’s trade deficit to China in the recent years included these consequences of the global supply chains established.

The question is, therefore, whether the halving of the trade deficit over the period 2014-2017 and 2017-2019 reflets the changes taking place in the global supply chains.

Changes in exports and imports by commodities 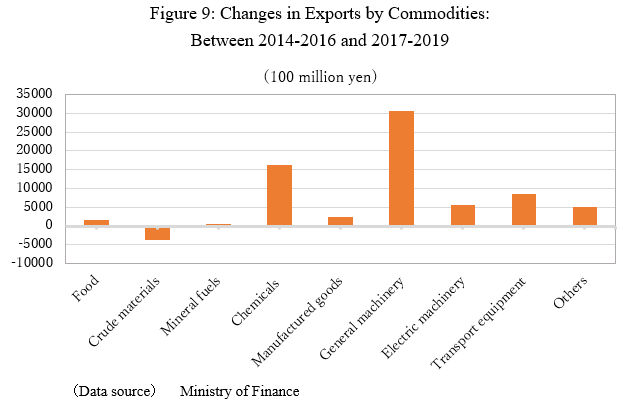 Exports of commodities like “general machinery” and “chemicals” to China are also increasing their shares in Japan’s total exports of these commodities. In the case of “general machinery”, the share of exports to China has increased from 18.1 percent in 2014-2016 to 22.4 percent in 2017-2019. Likewise, share of exports of “chemical products” to China has increased from 26.4 percent to 28.6 percent. They seem to suggest that the supply of intermediate goods from Japan to China is increasing. Global supply chains do not seem to have changed in this respect.

How about imports from China to Japan? As we confirmed earlier, total imports have not changed between 2014-2016 and 2017-2019. However, if we look at Figure 10 which shows the breakdown of imports by commodities, we find that, between 2014-2016 and 2017-2019, imports of “others” have declined significantly. The share of “others” imported from China in Japan’s total imports of the commodity has also fallen from 47.5 to 43.1 percent. Among the “others” category, labor-intensive light-industrial goods like “clothing and accessories” and “other miscellaneous articles” have dropped significantly. These suggests that, because of the rise in labor cost in China, source of the imports of labor-intensive light-industrial goods are shifting away from China. 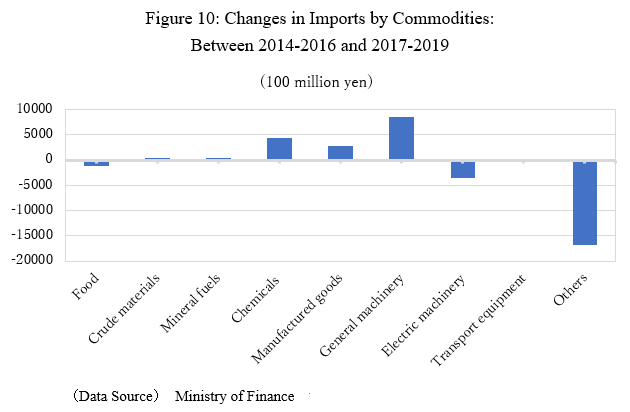 Understanding the change in Japan’s current account balance with China

If we are to summarize the above, the following could be said about the change seen in Japan’s current account balance with China.

First, it does not seem that the revision of global supply chains is behind the change in the bilateral balance. It is consistent with the result of the survey done by JETRO in November and December 2019 which shows that only 7.6 percent of the responding firms “have revised or considering revising their supply chain in response to protectionism” (Survey on the international operations of Japanese firms: FY2019). It also corresponds to the result of the survey done by JBIC in August and November 2020 which shows that 63.5 percent of all respondents (51.4 percent if only respondents which have operations in both US and China) said there have been “no discussion of US-China decoupling” (Survey on the outlook for Japanese foreign direct investment: FY2020).

Second, it does not mean, however, that there is not a change in trend of Japan’s current account balance with China. Structural factors do seem to have led to the change in trend of the bilateral balance. What the above observations suggest is that the structural factor involved is not the changes in global supply chains but the economic development of China which have expanded its domestic market and raised labor cost. These domestic changes seem to have led to Japan’s current account increase with China: increase in inbound tourists, increase in direct investment income receipt, increase in final goods exports, and decline in imports of labor-intensive light-industrial goods from China. These factors would remain if economic development of China is to sustain.

Whether these changes are going to stay in the future or whether we will see further changes due to the revision of global supply chains is yet to be seen. How COVID-19 is going to affect the development is another factor we need to pay attention to. Is it just going to accelerate the changes already on their way or is it going to have an modifying impact on the nature or the direction of the changes?