Forecasts Up as Trump Risks Yet Unrealized

The previous survey conducted in December, a month after Donald Trump's victory in the U.S. presidential election, found that the economic outlook for Asian economies had worsened. Concerns over protectionism and general uncertainty were behind this deterioration. Such "Trump risks" persisted or even increased in the March survey, but 2017 growth forecasts were revised upward for three Southeast Asian countries -- Malaysia, Singapore, and Thailand. This can be attributed to brighter prospects for exports amid gathering anticipation of Mr. Trump's pro-growth policies in the short term. For real economies, the negative effects of "Trump risks" remain unrealized.
Economists share the view that protectionism, market turmoil, and U.S. monetary policy are among the biggest risks for their economies. "Rise of protectionism" was the biggest risk for Malaysia, Singapore, and Thailand and the third biggest risk for the Philippines and India. Asked about the impact of President Trump's policies, doubts were raised over the ability of his administration to govern, as well as protectionism and migration policies including visa issues.

The outcome of this survey was also reported at Nikkei Asian Review. (April 11, 2017)
Special report on "20 Years Since the Asian Financial Crisis" 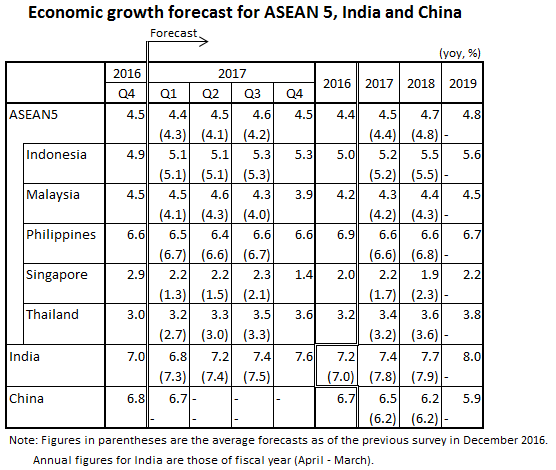