Donald Trump's election as U.S. president has cast various doubts over Asian economies, ranging from the possibility of rising protectionism to new financial market turmoil. For now the impact differs by country. Economists revised their 2017 growth forecasts downward for four Southeast Asian countries — Indonesia, Malaysia, Singapore and Thailand — a response in part to the Trump factor, while the prospects were revised upward for the Philippines. India's forecast was revised downward for 2016/17, but this is due to the temporary effects of demonetization policy.
Trump-related risks are conceived differently in each country. They are taken seriously in the four nations for which forecasts were revised downward, and less seriously in India and the Philippines.
Economists see the market as more volatile than before. Market pressure toward depreciation of Asian currencies persists. Repercussions of U.S. monetary policy constitute a big risk throughout the region.

The outcome of this survey was also reported at Nikkei Asian Review. (December 30, 2016) 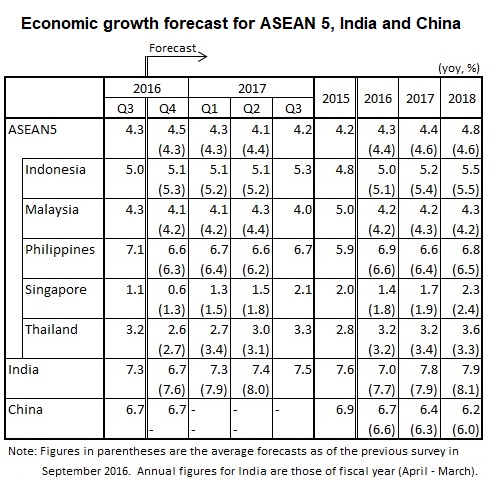