Following the previous survey in September, economists revised their 2017 and 2018 growth forecasts upward for major Southeast Asian countries, reflecting prolonged strong exports of electronic goods and spillover effects on domestic economies. The forecast for India in 2017/18 was downgraded once again to below 7% as the disruption accompanying the introduction of Goods and Service Taxes was heavier than expected, but the economy is regaining power and the growth rate could return to more than 7% in 2018/19. Asked what most draws their attention in 2018, economists chose general and local elections in Malaysia, Thailand, Indonesia, and India.

The outcome of this survey was also reported at Nikkei Asian Review. (December 26, 2017) 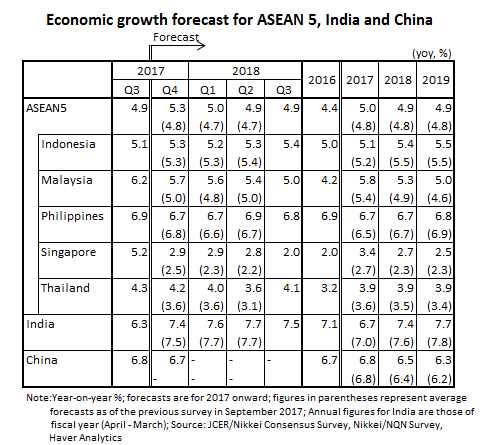