The spread of COVID-19 infection—particularly the omicron variant—seems to have slowed, and Asian countries have begun to reopen their economies. But a big rate hike by the U.S. Federal Reserve has chilled expectations for economic recovery. Inflation caused by the prolonged Ukraine war is another blow to economic growth. With inflation forecasted to accelerate and currencies expected to depreciate, each country will follow the Fed in raising policy interest rates. The economic growth rates of each country are expected to peak in the middle of 2022 and enter a deceleration from the latter half of the year, with a marked slowdown trend toward 2023.

The Japan Center for Economic Research and Nikkei conducted the twenty-sixth quarterly consensus survey on Asian economies from June 3 to June 23, asking about the economic outlook for 2022-2024. It collected 36 answers from economists and analysts in the five largest members of the Association of Southeast Asian Nations—Indonesia, Malaysia, the Philippines, Singapore, and Thailand—and in India.

Economists’ average forecast of the economic growth rate of the five ASEAN countries in 2022 is 5.0%, up 0.1 point from the previous survey in March (Table 1). Although the annual forecast for ASEAN has been revised slightly upward, on a quarterly basis projections have been lowered from the third quarter of 2022 in all five countries. The ASEAN growth rate is expected to slow down after peaking at 5.4% in the third quarter and fall to 4.8% in 2023, a downward revision of 0.1 point from the previous survey.

The outcome of this survey was also reported at Nikkei Asia. (July 4, 2022) 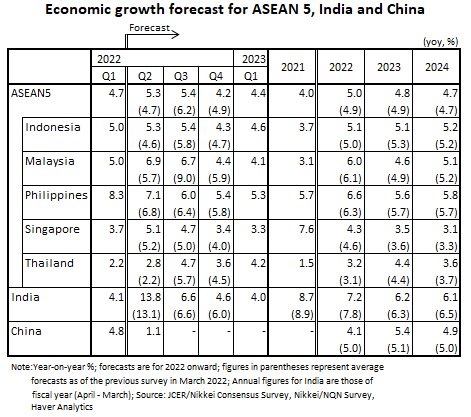 Amid Domestic Recovery, Caution Persists in 2023