As the COVID-19 pandemic winds down, Asian economies are on a recovery track supported by strong exports. Nevertheless, the growth rate forecast for 2023 has been revised downward for each country surveyed. This is because the U.S. Federal Reserve's hasty interest rate hikes will cool the U.S. economy and lead to a slowdown in exports from Asia. Currency depreciation and inflation will accelerate, forcing countries to follow the U.S. in raising interest rates. There are also growing concerns about the slowdown of the Chinese economy, and it seems that each country will face the challenge of sustaining its economy through increased domestic investment to compensate for exports.

The Japan Center for Economic Research and Nikkei conducted the twenty-seventh quarterly consensus survey on Asian economies from September 2 to 22, asking about the economic outlook for 2022-2024. It collected 35 answers from economists and analysts in the five largest members of the Association of Southeast Asian Nations—Indonesia, Malaysia, the Philippines, Singapore, and Thailand—and in India.

Economists’ average forecast of the economic growth rate of the five ASEAN countries in 2022 is 5.0%, unchanged from the previous survey in June. In the second quarter of 2022, Malaysia's exports were strong and its GDP growth accelerated faster than expected, but Singapore and Thailand fell short of expectations. The ASEAN growth rate is expected to slow down after peaking at 5.9% in the third quarter and fall to 4.3% in 2023, a downward revision of 0.5 points from the previous survey.


The outcome of this survey was also reported at Nikkei Asia. (October 3, 2022) 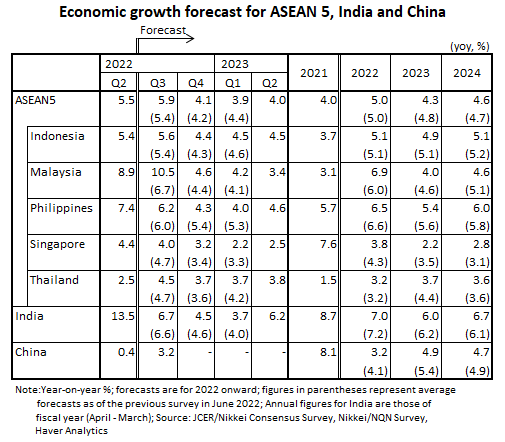