Business condition is deteriorating very quickly in Japan. It can be confirmed by Figure 1 which shows the Composite Indices of Business Conditions (CI) published monthly by the Cabinet Office (Figure 1). 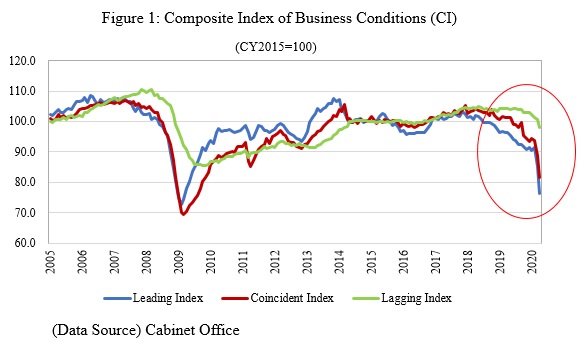 According to the Coincident Index, which combines the movement of a set of macroeconomic variables moving simultaneously with the business cycle, the business conditions have gradually eroded since mid-2018, because of the negative impact brought about by the US-China trade friction. The consumption tax rate-hike that took place in October 2019 have also added a further negative pressure on the economy.

The final blow, however, came from the impact of the COVID-19 and the policy reactions to the spread of disease: the drop of the Index in April by 7.3 points exceeds the drop that was recorded at the peak of the Lehman Shock in January 2009 (6.4 points). The steep fall in Leading Index in April leads us to expect that a further drop in the coincident Index is on the way. The recession, which awaits an official confirmation, can easily be a deeper one than that experienced in the global economic and financial crisis in 2008 and 2009. If the expansionary phase that started after November 2012 have reached its peak in October 2018 as the majority of economists thinks (JCER ESP Forecast in May 2020), it means that the expansionary phase that started with the onset of Abenomics have failed to become the longest expansionary phase after the World War II by two months.

Real GDP is expected to show a further drop

The real GDP growth rate is available only up to 2020 Q1. As Figure 2 shows, even though the quarter is before the declaration of the state of emergency in April, it still recorded a second negative growth following the drop after the consumption tax rate-hike. Q2 would probably record a third negative growth in a row with sharper drop than the previous quarters. 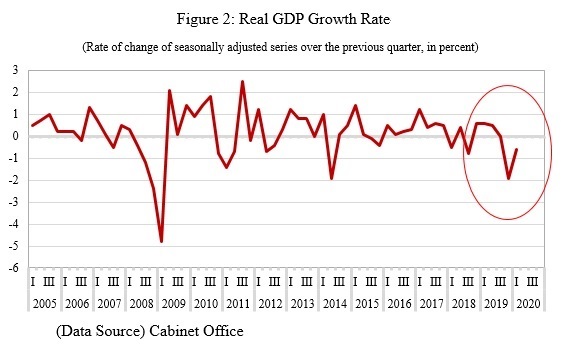 Business confidence surveys show signs of the expected sharper drop. For example, Economy Watchers Survey shows that the Diffusion Index for Current Economic Conditions started to fall in February and recorded a steep drop in April. Even though there was a modest recovery in May, the levels of the DI between March and May by far exceeds those recorded during the global economic and financial crisis in 2008 and 2009. 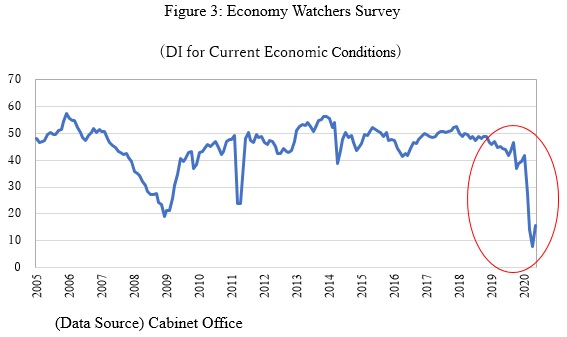 Such an economic deterioration would require firms to engage in a severe adjustment in employment. If excess employment is made redundant, unemployment rate should surge significantly. However, unemployment still remains to be low, showing only a modest rise in April. It is in stark contrast with the extraordinary surge in unemployment rate in the United States in the same month and the high level that sustained in May, as Figure 4 shows. 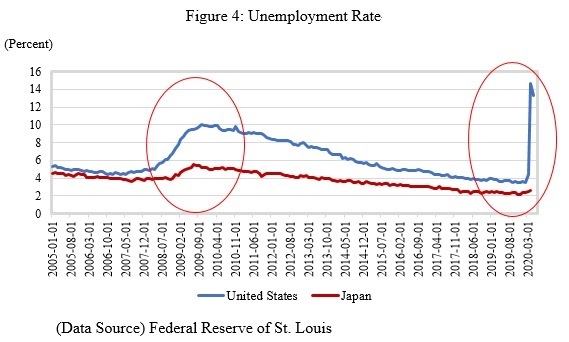 While the unemployment rate in May for Japan is still to be seen, it is most probable that unemployment in Japan will stay low even if the drop in real GDP will be larger than that in the US. We have witnessed that kind of a puzzle in the global economic and financial crisis in 2008 and 2009. Even when Japan’s drop in real GDP was larger than the drop in the US during that event, as Figure 5 shows, the unemployment rate rose only to about half of that in the US, as shown in Figure 4. 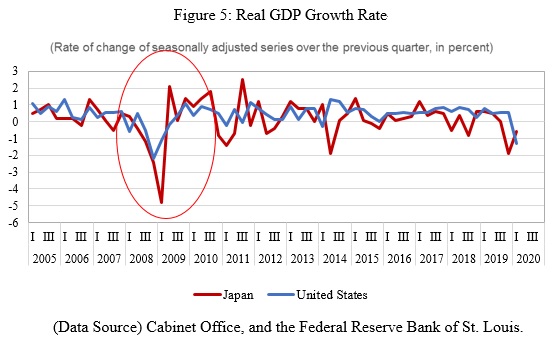 Features of the labor market adjustment under lifetime employment 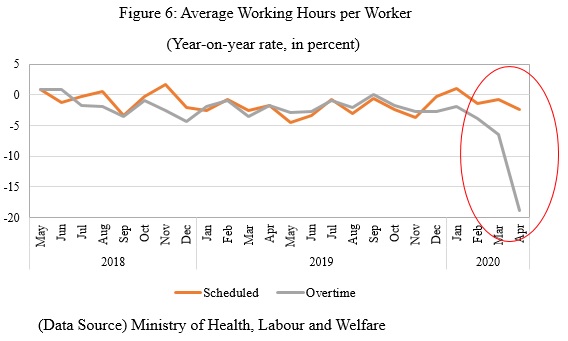 Second, firms are postponing new hiring. Since early 2020, new job-offers through Hello-Work (public employment service) has started to fall for both regular and part-time workers. As Figure 7 shows, job-offers for regular workers and part-time workers in April were both about 30 percent fewer than those in the same month previous year. 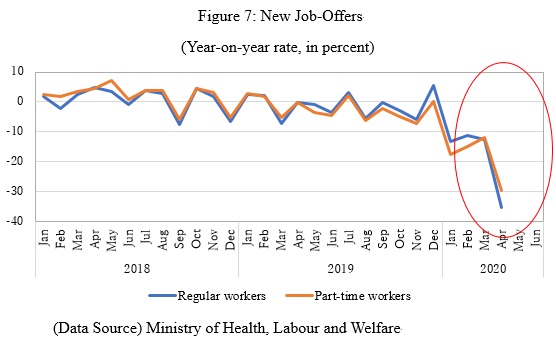 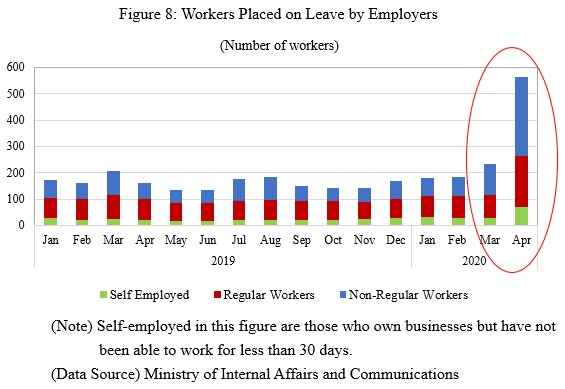 Fourth, in spite of the efforts made to retain employment, some firms have started to reduce their working force. As Figure 9 shows, the special feature of the current stage is that the reduction is currently taking place only in non-regular workers. Regular workers, on the other hand, are still kept intact owing to the lifetime employment system. 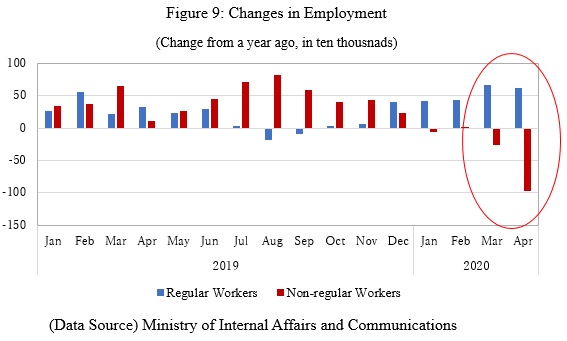 As we have seen, the adjustments taking pace in the labor market in Japan has not resulted in mass unemployment. As mentioned earlier, previous experience shows that lifetime employment system in Japan has been able to contain unemployment relative to other economies. Of course, it must not be forgotten that some workers, especially non-regular workers, had been vulnerable and had to suffer significant difficulties in those times.

The situation under COVID, however, does not allow optimistic forecasts. The depth and the length of the recession that we have entered is still unknown. It may become a crisis that the lifetime employment system is incapable to cope with. Whether the system will be able to cope with the situation or not depends on the financial ability of the firms to absorb the adjustment pressure.

After all, maintaining employment in difficult times is a big burden that has to be borne by the firms. In particular, placing workers on leave obliges the firms to pay at least 60 percent of the wages of the workers. Firms who do not have enough net assets can easily go out of business because of this huge labor cost.

Fortunately, Japanese firms have been preparing for such a business risk ever since the global economic and financial crisis in 2008 and 2009. Firms have been accumulating record-high retained earnings in the recent years: the amount has reached 549 trillion yen in Q1 this year as Figure 10 shows. 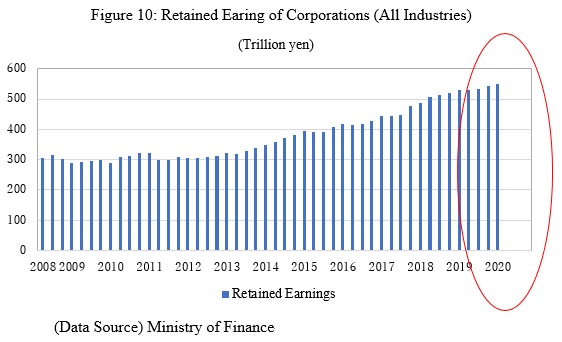 In addition, the government has moved to support firms that maintain employment by subsidizing a part of the wages paid to the workers who are on training or on leave (Employment Adjustment Subsidy). It played a big role in keeping unemployment low during the global economic and financial crisis in 2008 and 2009. The government, through the second supplementary budget for FY2020 that passed the Diet in June 12, is relaxing the condition for its eligibility and also increasing the subsidy that would be paid to the firms. Also, the government and the Bank of Japan together is facilitating interest-free and collateral-free lending by the commercial banks and government financial corporations.

We have yet to see whether these efforts are sufficient to keep unemployment low under the sever downward pressure provided by COVID-19. If not, we need to be ready to introduce further initiative to fight with the invisible enemy.