Labor Market Tightens: But won’t be a Ceiling for Growth

There are signs that the labor market is tightening. Unemployment rate is as low as 3.5 percent in seasonally adjusted terms in May 2014. The effective job offers-to-applicants ratio has also reached 1.09 in seasonally adjusted terms in the same month. We hear a lot about the difficulty that firms in the construction, retail, and restaurant business face. Some worry that firms that are unable to hire enough workers may have to give up their business.

Tightening of the labor market coincides with the estimates that show closing of GDP gap. Bank of Japan made public their estimate of GDP gap for the Q4 of 2013 showing that it has become almost zero. Cabinet Office also published its estimate for the Q1 of 2014 which is minus 0.2 percent of potential GDP. While there is a difference between the two (Bank of Japan’s estimate for the Q1 of 2014 should be around 1 1/2 percent if they revise it), it suggests that the actual GDP has reached the potential GDP in the recent quarters.

The tightening of labor market, however, does not mean that economic growth has reached it ceiling, implying that further growth has become difficult. Let us discuss why it is so.

Degree of tightness is different between regular and non-regular workers

First of all, has the labor market really tightened? As far as the effective job offers -to-applicants ratio goes, it has been more than unity since November 2013. (Last time it was above unity was in October 2007.) In aggregate terms, there is enough job offers for all job applicants to have a job. In most industries, new job offers have significantly exceeded the previous year’s level.

However, the tightness of the labor market is different between regular and non-regular workers. As the Figure shows, the effective job offers-to-applicants ratio for regular workers has being well below unity for a significant length of time. Even in May 2014, it is still 0.67. Job offers for regular workers are still rare. On the other hand, there is a strong demand for non-regular workers, part-time workers in particular. As the same figure shows, the effective job offers-to-applicants ratio for part-time workers has continuously exceeded unity since February 2012. In May 2014, it is as high as 1.39. 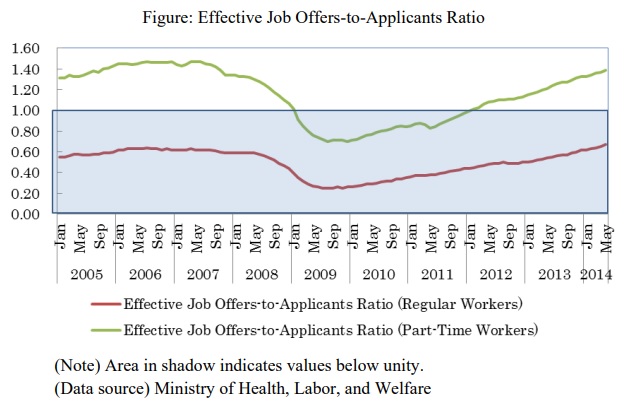 Opportunity to realize a better balance in labor conditions

One of the consequences for the tightness of the market for part-timers is that their hourly wages are rising considerably. Furthermore, in order to prevent workers from leaving, some firms have decided to offer permanent jobs to the part-timers. There are also cases where a new category of regular workers, one that their work place is limited to the vicinity of where they currently live, has been created.

Duality of the labor market, which has been one of the special features of the Japanese labor market, is gradually changing. It provides us with an invaluable opportunity to achieve a better balance of the labor conditions between regular and non-regular workers.

The next issue is whether or not we have hit the ceiling for economic growth: as we have seen, GDP gap has effectively vanished. An important place to start with is to confirm how potential GDPs are estimated. There are two approaches for estimating potential GDP; the maximum input approach and the average input approach.

If we are to understand potential GDP as suggested by the average input approach, zero GDP gap only means that labor is used in an average level of the past; one can expect labor to be mobilized above average. Consequently, even if GDP gap has become zero, it does not imply that economic growth has hit its ceiling.

Labor can be substituted by capital

Of course, it may be asked that, if the GDP gap becomes significantly positive, wouldn’t economic growth finally reach its ceiling? In order to answer this question, it is important to give a consideration to the production function used to estimate the potential growth.

If the relationship between labor and capital is fixed, and there is no substitutability between the two, soon or later economic growth will hit its ceiling. The production function that has these features is called the Leontief production function. It was behind such growth models as the Harrod-Domar growth model. The assumption is, however, unrealistic.

In contrast, the production function used in estimating potential GDP is the Cobb-Douglas production function allowing capital to substitute labor when the relative price of labor rises (elasticity of substitution is assumed to be unity). In more concrete terms, it is expected that, when wages rise because of the shortage of workers, labor-saving business investment would be stimulated. It is a natural thing to expect, and we should be seeing much of this in Japan as the tightening of the labor market continues. It implies that shortage of labor does not necessarily mean that economy will hit the ceiling.

It is undeniable that paying more wages and borrowing money from banks to finance labor-saving business investment is going to be a burden for the firms. If, for instance, there is a constraint in taking action in this respect (e.g. credit rationing), policies should be implemented so as to remove the constraint. If, on the other hand, there is no such constraint, firms should adapt to the situation where labor has become scarce. Only by adapting to the situation can we transform our economy to a more capital-intensive one.

Even leaving that aside, if we recall our earlier discussion, accepting more foreign workers could be containing wage increase and put to a halt the transformation of the economy to a capital-intensive one. As a result, Japan may have to compete more with the developing economies who have relative advantage in labor-intensive goods.