Significance of the macroeconomic slide mechanism

Aging and shrinking of the population is taking place rapidly in Japan. Among the concerns arising from this fact is the unsustainability of the Japanese social security system. Because there is going to be many benefit receivers relative to contribution payers, the system is considered to be unsustainable. This is certainly the case with health-care and long-term care systems. However, against the impression of the many, the sustainability of pension system is relatively isolated from the changes in demography (Figure). That is because, in the case of the pension system, an automatic adjustment mechanism to match the demographic changes is in place. In this month’s column, the significance and the limitation of this mechanism, which is called the “macroeconomic slide” mechanism, is discussed. 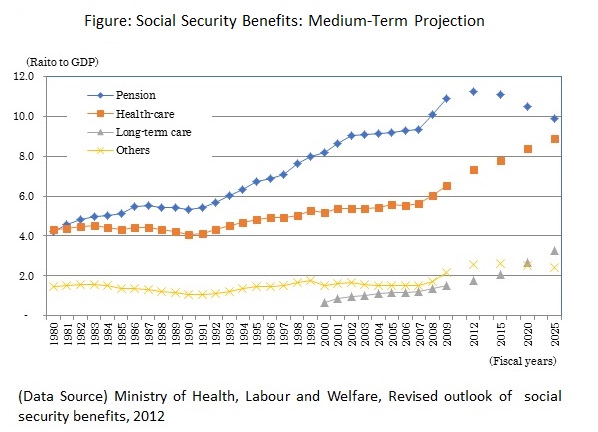 The adjustment mechanism of the pension benefits was originally designed in terms of price and wage indexation, which are called the “price slide” and “wage slide” mechanisms, respectively. The general rule was that, assuming a case where rate of increase in average wages of the workers exceeds the CPI inflation rate (i.e. where real wages are increasing), the pension benefit for the new pensioners will be raised by the rate of increase in wages, and the pension premium for the existing pensioners will be raised only by the CPI inflation rate. The general rule also it expected to be applied symmetrically: the pension benefits will be cut if the prices and wages falls. (In other cases, the general rule will be modified, but we will not go into the details at this moment.)

MESM was added to the menu of automatic adjustment mechanisms. It is an adjustment mechanism that takes into account the impacts of two factors; (i) the extension of average life expectancy, and (ii) the shrinking number of the insured (i.e. working-age premium payers). Since it takes into account the macroeconomic factors that affects the financial balance of the pension system, it is called the “macroeconomic” slide system. Since the two factors both works to worsen the financial balance of the system, what it effectively does is to cut the pension benefits automatically by a rate that is obtained by applying a formula designed to reflect the impact of the two factors.

One exception to the MESM is when, simply applied, it leads to a cut in pension benefits in nominal terms. Considering the impact on the pensioners when it actually takes place, the MESM is to be applied only to the extent that it will not lead to a net reduction of pension benefits. It means that it will not be applied in its full magnitude when the positive adjustment due to price and wage slide mechanisms, as mentioned above, is less than the expected negative adjustment due to MESM. Nor will it be applied when the price and wage slide mechanisms ask for a cut in pension benefits; the MEM will not be applied to cut the pension benefits further. (From April 2018, the legislation has changed so that, when there is a leftover of an adjustment, the leftover would be reflected in the adjustments to be made later).

Compared to the price and wage slide mechanisms that are designed to maintain the purchasing power and the replacement ratio from worsening, MESM is designed to adjust the pension benefits so that the financial balance will become more sustainable in the long-term.

Macroeconomic slide mechanism has not fully functioned until recently

While the adjustment systems that had been introduced were significant in its inception, they faced some difficulties in displaying their full potential. It was not only in the case of price and wage slide mechanisms but also in the case of MESM.

When the price and wage slide system faced a possibility of negatively revising pension benefits because of deflation, the government decided to suspend the adjustment from taking place and maintained the level of pension benefits flat during the years between FY2000 and FY2002. It had an effect of raising the purchasing power of the pension benefits in real terms, and thus contributing in supporting household consumption that was fragile at the time. However, it also had an effect of worsening the financial balance of the pension system: pension benefits were 2.5 percent above appropriate level as of FY2012, i.e. the level that would have been achieved if the mechanisms were applied as it was stipulated (The level of pension benefits did not return to the appropriate level until the benefits were cut three times between October 2013 and April 2015, in order to make up for the over-payment of pensions).

The suspension of price and wage slide system had an implication for the MESM as well. As already mentioned, MESM was not to be applied when deflation was taking place. But in addition, it was decided that MESM would not be applied until the level of pension benefits will return to the appropriate level. That is why MESM was not applied even when inflation rate turned positive under Abenomics. The first time MESM was applied was in April 2015 (and, so far, it is also the only time it was applied).

Limitations of the macroeconomic slide mechanism

While MESM was introduced to improve the sustainability or the pension system, it also has some problems.

First, it may lead to significantly low level of pension benefits.

The aim of the 2004 Pension Reform was to “secure” the social security system for the next hundred years: It is defined as a state of the pension system where replacement ratio of the benefits remains to be above 50 percent, while leaving a year’s pension payments- worth of financial assets in hundred years’ time.

However, under some pessimistic scenarios shown by the Ministry of Health, Labour, and Welfare (MHLW) at the review of the financial situation of the pension system made in FY2014, the replacement ratio was projected to be lower than 50 percent. It means that, in exchange of a better financial situation of the pension system, pension benefits could be cut to a level that may threaten minimum standard of living.

Moreover, even if we are able to maintain a replacement ratio of no less than 50 percent, the level may not be enough to maintain a reasonable life: It is particularly the case for basic pensions which may fall below the government’s criteria of guaranteed minimum standard of living in some cases.

Second, MESM is designed to be a mechanism to realize a pension system that will be “secure” for the next hundred years. MESM ceases to be effective once it is expected that the system is “secure”.

In the optimistic scenarios provided by the MHLW show that MESM will cease to be effective within about 40 years. However, even under these cases, the profile of the financial assets of the social security system shows that immediately after 100 years, it may fail to be “secure”. (Please refer to the following column for further discussion on this point and others: https://www.jcer.or.jp/eng/research/pdf/saito20140804e.pdf )

In order to improve the system, there are number of options that could be taken.

First, MESM could be reformed so that it would be effective even when price and wage deflation takes place. Since such a reform implies that MESM would improve the financial situation earlier than otherwise, the replacement ratio will be higher.

Second, automatic adjustment mechanism could be changed altogether so that the adjustment could take place in terms of the eligibility age of receiving pension benefits, instead of the level of pension benefits. It means that, when the financial balance worsens because of demographic, the pension eligibility age will be adjusted to later years; from 65 to 68 for instance. This is a kind of reform that the International Monetary Fund (IMF) recommends (Arbati, Feher, Ree, Saito, and Soto, “Automatic Adjustment Mechanisms in Asian Pension System?”, IMF Working Paper WP/16/242, December 2016).

From the replacement ratio’s point of view, this option may be better. However, if the pension benefits will not be paid until you are older, the question arises as to the means to support your life between the retirement age and you pension eligibility age. It may be easy if there is no formal retirement age and you can decide when to retire by yourselves. However, in a country like Japan, there is a nation-wide retirement age which is difficult to change. For this option to be workable, the whole employment system needs to be reformed.

Expectations for the next financial verification

A new long-term population projection came out in this April (National Institute of Population and Social Security Research, Population Projection for Japan: 2016-2065). It will be used in the next exercise to verify the financial situation of the pension system (called the “financial verification”) which is expected to come out in 2019.

We hope that the exercise would lead to an introduction of new initiatives, including the reform of MESM, that would improve the sustainability of the system, and thus lead to a better prospect for the system in the long-term.