Matching in Japan: In need of improvement

Deciding which school to go, where to work, and who to marry is the three most important decisions that an individual needs to make in a lifetime. In each of the three phases, one has to make a choice between multiple options, and choosing one from them is a hard decision to make. However, the real difficulty lies in the fact that the counterpart (the school, the firm, and the individual) is also making choices, and that, in order to complete the process, the choices of both sides have to match. Whether this “matching” ends up with a satisfactory outcome is as important for the whole society as it is for the individual.

Available evidence shows that matching of this kind in Japan is becoming increasingly unsatisfactory.

For instance, in the case of choosing which school to go, the enrollment rate of high-school graduates to universities has risen to reach more than 50 percent, as Figure 1 shows. Therefore, it has become more common to go to a university than in the past. However, at the same time, there are higher dropout rate of university students. About half of the dropouts in 2012 said that the reason for the dropout is a mismatch with the university; they have (a) transferred to a different university (15.4 percent of the total dropouts), (b) failed to do well at studying (14.5 percent), (c) decided to take a job (13.4 percent), (d) didn’t fit well to the university (4.4 percent), and (e) decided to study abroad (0.7 percent). It shows that the matching of the individual and the university was not satisfactory for these students and that the mismatch may be increasing. 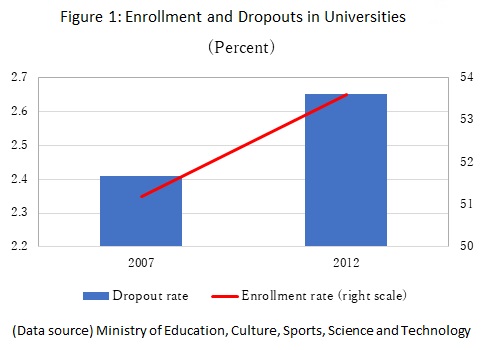 Similar observation can be made in the case of employment.

As Figure 2 shows, employment rate of new graduates has increased since early 2010s to reach 98.0 percent in 2018 and 97.6 percent in 2019. However, at the same time, the turnover rate of those who are within three years of employment has also risen since early 2010s to reach 32.0 percent for 2016 graduates. For these young workers, it is obvious that the matching with the firms was unsatisfactory. 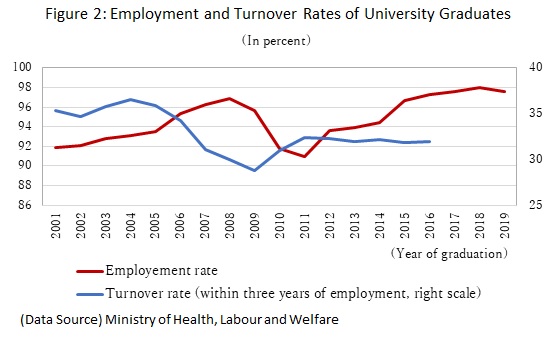 Increase in ratio of the divorced

Matching in marriages is also showing signs of increasing mismatch.

First of all, there is less marriage taking place at a given age. There is an increasing number of both males and females who are delaying their marriage (and some do not for life). Figure 3 shows the increase in the rate of the unmarried among those aged 30-34, but similar increase can be seen in other age-groups as well. 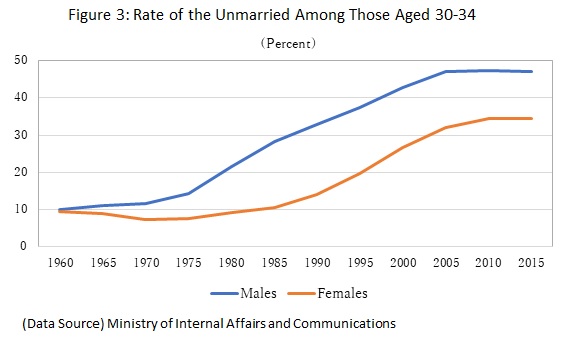 Delay in marriage means that matching itself is taking more time than in the past. However, there is also an evidence that the matching that was made was not satisfactory. As Figure 4 shows, the ratio of the divorced (defined as a ratio of the number of the divorced to the number of the married) is gradually increasing. (The ratio for females is higher than the males, reflecting the longer life expectancy.) 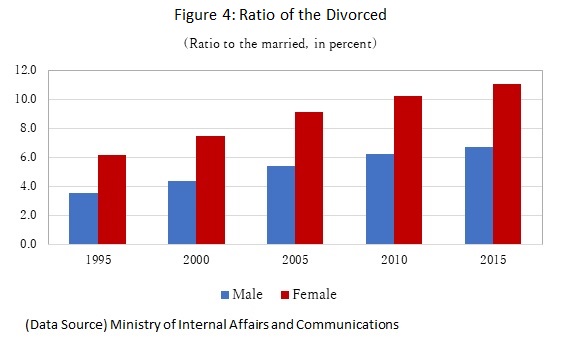 What Gale-Shapley algorithm tells us

The conditions for achieving a stable matching is provided by the Gale-Shapley algorithm. The assumptions are that there are two groups of agents A and B (it could be individuals, schools, or firms) whose members have clear preference over the members of the other in terms of being matched. Suppose that it is the members of A that makes the positive action to the members of B. First of all, a member of one of the two groups, say “a” of A, is allowed to approach a member of the other, say “b” of B, that is at the top of the list of preference, and express the desire of “a” to match with “b”. “b” will compare with the different offers that have been received, if any, and keep the offer which is most preferable and refuse the others. If refused, “a” will make a move to the next member of B which is next on the list of preference. The next member of B will follow a similar decision process as “b”. This process will continue until “a” no longer needs to make any offer, and all other members of A has reached a similar situation. This way of matching has been proved by Gale ad Shapley to reach a stable outcome (meaning that there is no incentive of any member to make further offer).

Compared to the Gale-Shapley algorithm, the actual matching process taking place in Japan in terms of (a) choosing the university to go, (b) choosing the firm to join, or (c) choosing a person as your partner, is quite different.

In the case of (a) choosing the university to go, there are entrance exams, so that your preference may be restricted by the result of the exams to a subset of the preference list. In the case of (b) choosing the firm to join, there are recruitment rules that member firms of Keidanren have to observe so that matching is constrained for them. And for (c), there are psychological barriers, especially in Japan, to express preference to the other explicitly. These factors lead to situations where the actual matching may not lead to a stable outcome.

In addition to the constraints facing the actual matching process, there are also problems with regards the requirement that all agents need to have a clear preference over all possibilities. This is a strong assumption which, in reality, is difficult to meet because of a number of reasons.

First, there is not enough information to form a clear preference. Because of that, initial preference on which the matching took place may turn out to be different from the preference one would form after the matching was made. This may come up often after entering a university or joining a firm. Individuals should have enough knowledge about its own interest/ability or studying/working environment before facing the matching process. However, in many cases, high schools and universities do not provide such opportunities so that individuals do not have sufficient knowledge and tend to just follow what others (schools, parents, or the common sense) suggest.

Second, there is an uncertainty as to what kind of opportunities are waiting in the future. In the case of marriage, because of the higher possibility of getting higher education, of getting a job (especially for females), and of moving to other location for education or work, there are many people you may meet in the future. This makes it hard for individuals to fix the number of candidates and form a clear preference over them for the matching to take place.

Reform of the matching process needed

Unsatisfactory matching is a problem for the society as much as it is for the individuals. Higher rate of dropouts, turnover, and divorce is a second-best solution because it can be considered to be a dynamic process in search of a stable outcome. However, the movement incurs cost, in terms of time, money, and stress. Therefore, what needs to be done is to reform the current matching process so that it will achieve a stable outcome. Reforms of the school entrance process, recruitment process, and workstyle is a good and necessary starting point.