A proposal to raise the minimum wage

On November 24, Prime Minister Shinzo Abe announced that minimum wage, which now stands at a national average of 798 yen an hour, should be increased annually by about 3 percent with an aim to reach 1000 yen. It is a part of the strategy to raise wages and encourage consumption so that the target of nominal GDP of 600 trillion yen can be achieved. 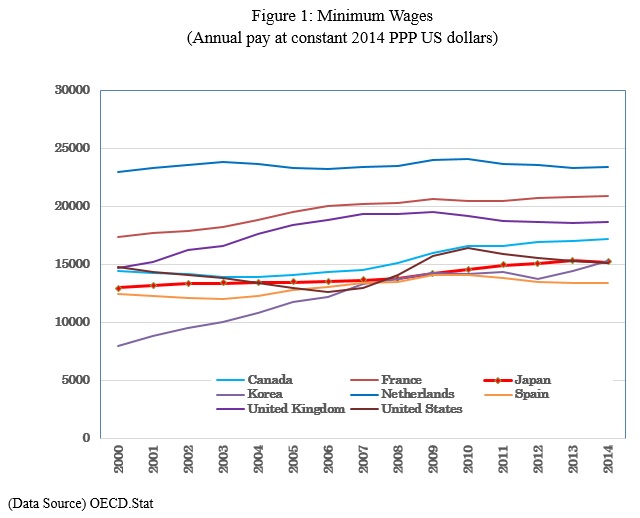 As a result of such minimum wage increase, the workers who are paid the minimum wages or in the close vicinity would be able to receive higher pay. It is often considered to be a useful tool in addressing the poverty issue.

It needs to be noted, however, that about half of those who would be receiving higher wages because of the minimum wage increase are either spouses or children of the households whose incomes are higher than 5 million yen (Kawaguchi and Mori, 2009). It will benefit not only those most in need but also those that are relatively well-off.

In view of this fact, minimum wage policy is considered to be an inefficient way of addressing poverty issues. An efficient policy could be designed to be more targeted.

Negative impacts on employment and profits

In addition, minimum wage increase has its cost.

Those workers who are able to keep their jobs can enjoy higher pay. On the other hand, there would be workers who would lose their jobs because of the higher pay which forces firms to reduce employment along the downward-sloping labor demand curve (empirical studies on the implication of minimum wage increase in Japan do generally find negative impact on employment). Unemployment may further be reinforced by the increase in job seekers who would enter the labor market along the upward-sloping labor supply curve.

For the firms, it should mean a decline in profits because the new equilibrium is not at the profit maximizing point. The new equilibrium, therefore, would have a negative impact on both the households and the firms.

These negative impacts, however, may not be so significant in the current Japanese economic condition.

That is because, as the latest unemployment rate (at October 2015) of 3.1 percent shows, the labor market is current sufficiently tight. The firms may already be in shortage of workers so that no workers will be made redundant. Even if some workers do lose their jobs, it would be relatively easy for them to find new ones. Similarly, since the corporate sector as a whole is currently making a record high profits, any reduction of profits resulting from the minimum wage increase will be easy to absorb.

Positive structural benefit to the economy

In spite of the limited positive impact on poverty and the negative impact on employment and profits, there is a case for pushing for a minimum wage increase. It is from a structural point of view: Increase in minimum wages could encourage earlier exit of inefficient firms that currently exist in a large magnitude in the economy.

As Figure 2 shows, there are many small businesses in Japan who are incurring loss of profits and are not paying any corporate income tax. As the sustaining large share of those companies show, it is of structural, rather than cyclical, nature. It can be considered to be a factor contributing to the low productivity of the Japanese industries as a whole.

If increase in the minimum wage would lead the way to restructuring or closing down of these permanently loss-making businesses, it would raise the profitability of the industry and even encourage entry of new productive firms. This would mean a departure of the Japanese economy from a regime where both entry and exit rates are significantly low.

It can be easily be foreseen that, in view of the impact on the small business, there would be pressures on the government to introduce polices to address the difficulties the small businesses face. It is important that, even in such a case, any policy taken should be inthe area of supporting restructuring, assisting change of business, encouraging exit, and providing safety-nets, rather than preventing the changes. Otherwise the structural benefit of the minimum wage increase in raising the productivity will be lost.

Importance of its supply-side implication

Raising minimum wage has been suggested in the context of demand-side stimulating policy: increase household income and stimulate consumption. It is also considered to work as an anti-poverty policy.

Minimum wage increase should be seen as a tool for structural policy.