Need for a Diversification? ： What the Great East-Japan Earthquake and COVID-19 tell us

Series of rare events have occurred

Three years after the Global Financial and Economic Crisis, Great East-Japan Earthquake took place. Ten years after the Earthquake, we are amidst the COVID-19 pandemic. Each of the shocks may be a rare event that is difficult to foresee: once-in-a-hundred-years’ event, tail risk, or a black swan. However, shocks as a whole have become more common. There is a high probability that another shock will occur within the next ten years. It could be one of the events that is already expected with certain probability (e.g. earthquakes) or something that is beyond our imagination (e.g. war, meteorite, etc.).

If such an uncertainty is what we are facing, the next question that we should ask ourselves is whether we are making the optimal response to it or not. In particular, is it appropriate to leave concentration and agglomeration to continue as it is?

For example, Great East-Japan Earthquake told us that too much dependence on a single source has a large risk of production being disrupted: damage of a computer-chip supplier in Nakaminato, Ibaragi, led to a halt in car production not only in Japan but also in other parts of the world. The closure of power generation plant in Fukushima forced the electricity users of TEPCO in Kanto region to engage in a planned blackout.

Also, COVID-19 told us that infection is more likely to take place when there is more face-to-face encounter of people. Tokyo has seen the highest level of infection not only because of the size of the population but also by the high rate of infection per population: the latter being the result of the high density of population. This is suggested by the positive correlation between population density (number of persons per square kilometers) and number of deaths by COVID-19 (per million population) as Figure 1 shows. 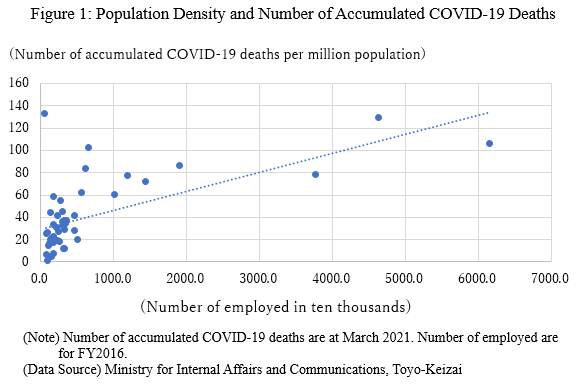 The lessons that these facts suggest is that we should avoid concentration in terms of production and population. However, the reality is that there is, in Japan, considerable concentration taking place in both aspects.

In terms of production, as Figure 2 shows, prefectural GDP is the largest highest in Tokyo: its share in the total GDP has been about 19 percent, nearly three times that of Osaka which is the second largest but with a share of only about 7 percent. 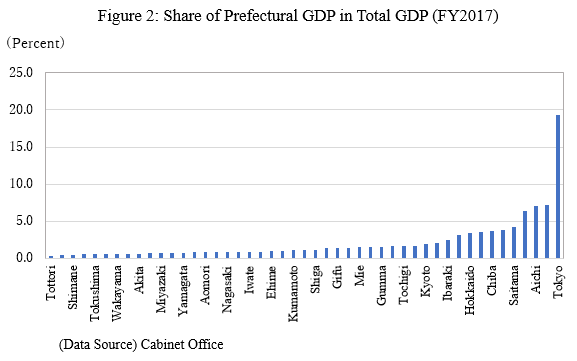 In terms of population. Tokyo is the largest with the share in the total population of about 10 percent, as Figure 3 shows. You can also see that the concentration to Tokyo has started to increase once again since the first half of 1990s. 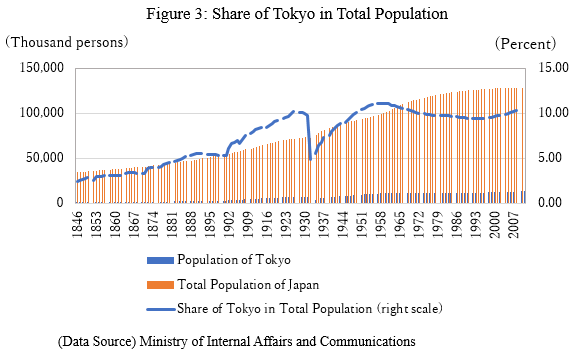 Can we diversify while maintaining productivity?

Of course, it cannot be denied that, because of the concentration, Tokyo was able to benefit from agglomeration and achieve higher labor productivity compared to other prefectures, as Figure 4 shows. It implies that, if population of Tokyo is to decline, labor productivity will decline so that it will be a loss not only for Tokyo but also for Japan as a whole. 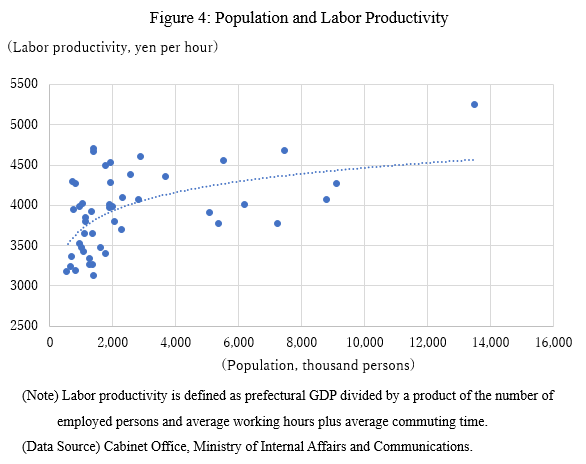 Are there any solutions to this dilemma?

If there are, the following two could be candidates.

First, as I argued in the last month’s column, COVID-19 showed that there is a possibility of achieving diversification while maintaining productivity. It would be possible if remote work is used with its full potential: realizing exchange in knowledge and ideas by virtual meetings not through real ones. It would maintain the benefit of concentration while actual population is reduced.

Second, there could be a diversification in the functions of Tokyo that would minimize the harm on productivity. For example, Tokyo as a business center could be separated from its function as a political center. If deregulation would be promoted so that there is less need for the business to be close to the government, such a kind of separation should be possible.

It has already been achieved in a number of countries in OECD. For example, as Figure 5 shows, some countries have non-capital metropolitan areas that have a larger GDP than that of their capital. Such a case can be seen in Australia (Sydney vs. Canberra), Germany (Munich vs. Berlin), Italy (Milan vs. Rome), Netherlands (Amsterdam vs. The Hague) and the United States (New York vs. Washington, D.C.). 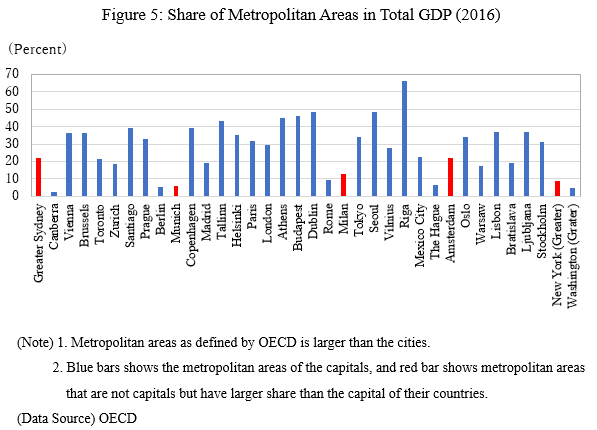 If the risk of concentration is acknowledged by the economic agents, there would be autonomous decisions made by them to diversify their activities. However, if there is irrationality or less than perfect information, intervention by the government may be needed. That would only be possible if the government shares such concern. Both the private sector and the government need to share a long-term rational view of the situation and to act.