Net Lending by the Corporate Sector: The Case of Japan

Corporate net lending and its implication

At a time of disappointing growth in the global economy, pursuing ways to encourage private demand is an important agenda. In that context, a special focus could be given to the growing net lending by the corporate sector (non-financial) which has become a common phenomenon in the major economies. If the corporate sector can reduce its net lending, and even revert back to net borrowing position that existed in the past, by increasing compensation of employees and/or increasing private business investment, global real GDP growth could be higher.

In the following, the reasons for the corporate net lending in Japan will be reviewed so that insights for the future trend can be attained.

Reasons for the turnaround to excess savings

Corporate sector in Japan, which used to record net borrowing position, turned into net lending in late 1990s. As Fig.1 shows, it owes to both increase in net savings and decline in net fixed capital formation which became evident in late 1990s. 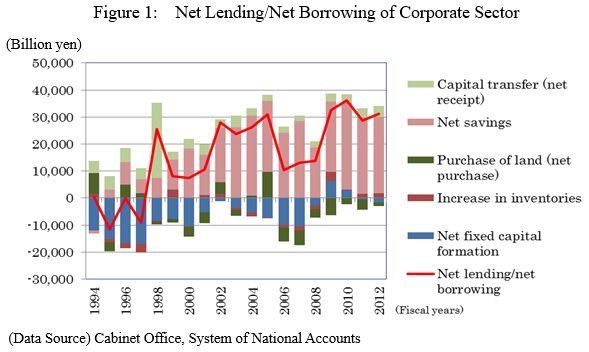 The reasons for the increase in net savings are as follows:

First is the decline in compensation of employees. It used to show a steady increase until the 1980s when the economy enjoyed relatively high growth. It became flat in early 1990s after the burst of the bubble, and began to show a gradual decline in late 1990s when the corporate sector started to engage in serious restructuring following the financial crisis that broke out in 1997. It stayed on the declining trend even in 2000s by increasing non-regular workers that became easier to employ after a series of regulatory reform with regards dispatched workers.

Second is the decline in property income payments, particularly interest payments, as Fig.2 shows. On one hand, it reflected the decline in interest rate that followed a series of monetary easing, including zero interest rate policy (1999-2000) and quantitative easing policy (2001-2006). On the other hand, it was a result of paying back bank loans which turned out to be excessive, inflexible, and expensive after the burst of the bubble. As Fig.3 shows, in place of bank loans, shares became relatively more important as means of financing, whose dividend payments could be more flexible at a time of economic difficulties. 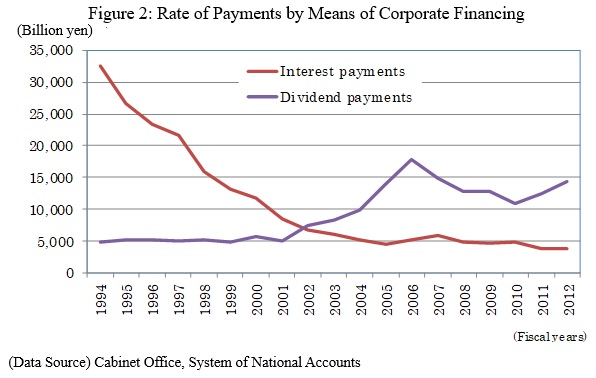 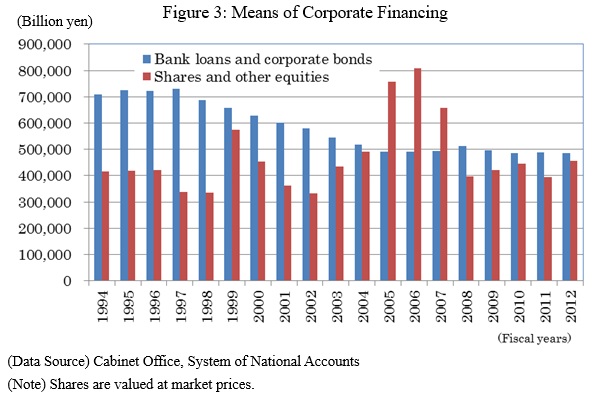 As for the reasons for the decline in net investment, they can be summarized as follows:

First is the decline in expected growth rate in the medium term. After the bubble burst and the decline in population became evident (working age population started to decline in late 1990s), firms found less reasons to maintain the production capacity, albeit increasing it. Consequently, net fixed capital formation (gross fixed capital formation minus consumption of capital) became almost flat. In addition, it may also be reflecting the growing importance of intangible assets which is only partially included in the current statistics on fixed capital.

Second is the fall in prices of capital goods which helped in capping business investment in nominal terms. Deflator for private business investment has been on a falling trend throughout the period, especially from early 1990s to mid-2000s, reflecting, inter alia, innovations in the IT sector.

It is sometimes presumed that excess savings of the corporate sector is resulting in piling up of cash by the firms. Evidence shows that, while it is true that firms have increased cash and deposits since late 1990s, it is the reducing of bank loans (partly offset by increase in stocks) and increasing of other assets that made larger contribution. Reduction of bank loans took place mainly during the period when the financial sector was dealing with the non-performing loans problem in late 1990s and early 2000s. Other assets that showed increase included assets that were accumulated through foreign investment, both direct and indirect. 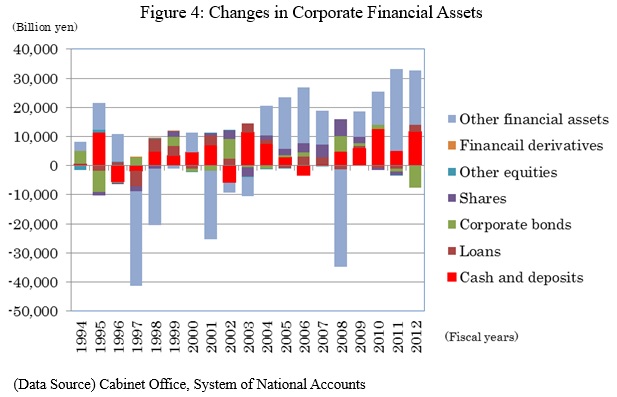 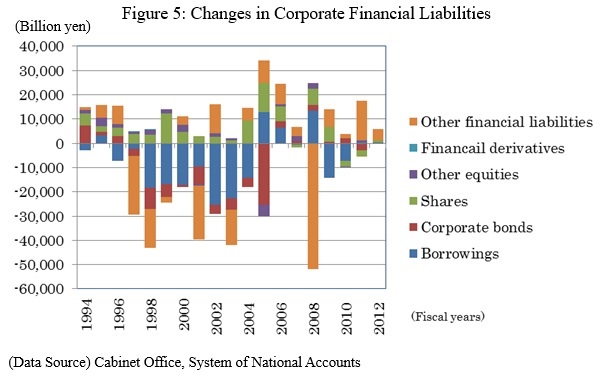 Above fact shows that firms are averting risk of failure by increasing cash and deposits as a buffer and shifting away from bank loans to shares to improve flexibility at times of difficulties. It is true that holding cash incurs opportunity cost: However, it may have fallen because of the decline in interest rate under easier monetary conditions. Financing by shares rather than debts may also imply increase in taxable income: However, relative cost of financing by shares (i.e. dividend payments are not deductible) may have been reduced by corporate tax cut that has taken place since late 1980s. It is the point emphasized by Roc Armenter in the context of the U.S. corporate savings (“The Rise of Corporate Savings”, Business Review, Federal Reserve Bank of Philadelphia, Q3 2012).

What is to be expected as the future of the corporate excess savings? There are factors that would work in reducing net lending. Compensation of employees can be expected to increase when economic activities revive against the backdrop of decline in labor force. Private business investment may also regain momentum as the medium-term prospect of the Japanese economy improves.

However, if the revival of the Japanese economy remains to be a time consuming challenge, monetary policy can be expected to be engaged in unconventional monetary easing for an extended period of time. Cuts in corporate tax rate may further encourage the shift of financing means to equities.

Net lending/net borrowing position of the corporate sector is going to depend on the success of economic policies in improving the medium-term prospects of the Japanese economy.