New decision made by the Bank of Japan

On July 31, the Bank of Japan (BOJ) decided to modify the monetary policy framework of “Quantitative and Qualitative Monetary Easing (QQE) with Yield Curve Control (YCC)”. The modification was made on both the QQE and the YCC parts of the framework.

On the QQE part, two modifications were made.

First, BOJ introduced flexibility to the purchase of exchange-traded funds (ETFs) and Japan real estate investment trusts (J-REITS). While maintaining that their amount outstanding will increase at annual amount of about 6 trillion yen and about 90 billion yen, respectively, it will be allowed to “increase or decrease the amount of purchase depending on market conditions”.

Second, it revised the composition of ETF purchase so that greater share will be given to the purchase of ETFs that track the Tokyo Stock Price Index (TOPIX) rather than to the purchase of a portfolio of ETFs that include those tracking Nikkei 225. The share of the former will be raised from 2.7 trillion yen out of the total of 5.7 trillion yen (about 47 percent), to 4.2 trillion yen out of the same total (about 74 percent). It is a response to the view that ETF purchase by BOJ in the traditional way is creating a corporate governance problem because, as a result, BOJ has become one of the major shareholders of a considerable number of firms.

With respect to YCC, three modifications were made.

First, it reduced the size of the policy-rate balance of the current account balance held by the financial institutions. The balance, to which a negative interest rate of minus 0.1 percent is applied, is reduced from about 10 trillion yen to about 5 trillion yen.

Second, it introduced flexibility to the long-term interest rate target by allowing the rate to “move upward and downward to some extent mainly depending on developments in economic activity and prices”. The allowance is expected to be about double of what it had been in the past; i.e. a change from a band of -0.1 to 0.1 percent to a band of -0.2 to 0.2 percent.

Third, it introduced a forward guidance for policy rates by announcing that it “intends to maintain the current extremely low levels of short- and long-term interest rates for an extended period of time”. It is in addition to the policy guidance for the monetary policy framework which says that it will continue to implement QQE with YCC, which aims to achieve the price stability target of 2 percent, “as long as it is necessary for maintaining that target in a stable manner”.

The modifications mentioned above were made to strengthen its commitment “with a view to persistently continuing with powerful monetary easing”.

It became necessary because QQE with YCC was facing some headwinds. In addition to the approaching limit of available government bonds for purchase by the BOJ, which was relieved somewhat by the introduction of YCC, it increasingly faced the deterioration of profitability of the financial institutions which faced negative short-term interest rate and flattening of the yield curve that YCC brought about.

However, the modifications made to the monetary policy suggest that it is gradually diverging away from QQE, YCC, and the monetary easing itself.

First, it is no longer QQE, or at least the quantitative easing part of it, because it is not committed to increase monetary base at a fixed scheduled amount: BOJ do not increase the monetary base at a pace of 80 trillion yen per annum, as it was the case until September 2016 (see Figure). Since the introduction of YCC, the operational target has shifted back from a monetary aggregate (i.e. monetary base) to interest rates (i.e. a negative short-term interest rate and a zero 10-year JGB yield).

Figure: Bank of Japan: Monetary Base 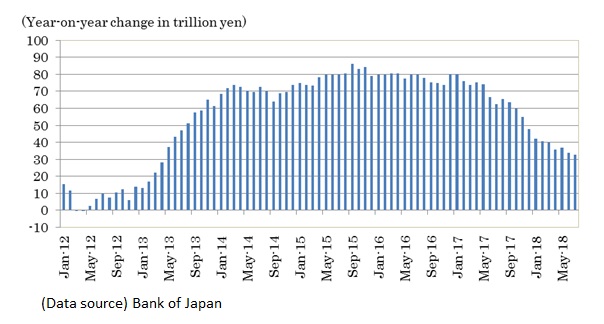 Second, YCC itself has been relaxed. On one hand, while a negative interest rate was maintained, the size of the balance to which the rate applies has been reduced. On the other hand, long-term interest rate is now allowed to rise more than before.

A need for enhanced accountability

BOJ is still committed to achieve the inflation target of 2 percent. However, it has been facing problems of slow progress in affecting the prices to develop towards the target, and, as a result, of increased difficulties that financial institutions face.

While understanding the difficult situation that BOJ faces, the modification that it has made in July 31 is somewhat ironic. Even though the intention of the BOJ is to strengthen the framework of “continuous powerful monetary easing,” the implications of the modifications are to the contrary. Alleviation of monetary easing may, unintentionally, only lead to a slower improvement of prices, and a further delay in achieving the inflation target.

In the short-term, what seems to be necessary is enhanced accountability on the side of the BOJ: to communicate more with the public, explaining and clarifying the stance of the monetary policy which has become difficult to understand. In the long-term, the BOJ may need to explore more the ways to make use of the channels that do not rely much on financial institutions whose profitability is low.